The galactic expanse has proven to be a fertile canvas for game developers to utilise. Fishlabs gives us its take on the space-combat genre in this new third person shooter, but can Chorus deliver a perfect harmony?

Chorus follows ex-cult acolyte Nara, several years on from a self-imposed exile, disillusioned after her part in cosmic events that tore humanity's existence asunder. Now a humble scavenger, the past she left behind threatens what remains, and she must reawaken the latent power that she abandoned and sealed away, to stop the Prophet from finishing what she helped start. 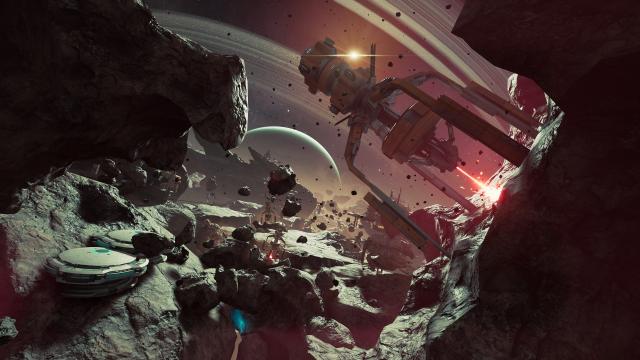 Gameplay opens in the hulking wreckage of a spaceship with the standard flight and ability tutorial, before we arrive at Stega Central, a ragtag grouping of space stations, situated amongst rocky debris and orbiting a giant gas planet. This is a visual treat for sure, as are many of the game's locations. At this point Nara is free to explore the first of several vast semi-open space arenas  (others becoming accessible via jump gates through story missions), to paint a gameplay style picture akin to somewhere in between Crimson Skies and Elite.

Structurally, though, the semi-open world template does cause an issue: given the dimensional freedom of space, and by its very nature a relative amount of emptiness, there can be a lot of distance between areas of interest. Three tiers of speed and a limited amount of boost gates go a little way to help, but given the quickest route will often mean being away from that ‘space-road’ network, a lot of what feels like slow travelling happens, with little of interest aside from nice visuals. There is a random event mechanic to alleviate the issue, but it tires relatively quickly given there are only a few variations on repeat. 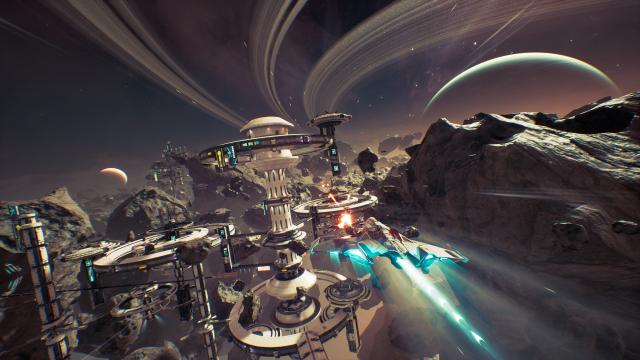 Critical story mission starts, and subsequent chain locations, are always visible on the map. Everything else is to be discovered either by flying close enough to a mission trigger or by using Nara’s much required ‘rite of the senses’, which visually highlights areas and objects of interest within a certain distance with temporary markers on screen; once identified, side missions will mark permanently on the map.

A handful of these side missions instantly present themselves, and plenty pop up across the game. Variety is generally okay, ranging from perhaps weaving through space citadels staying out of sight from patrols, to protecting a defector's escape amongst neon lit hologram signs. Some, though, are very basic, requiring just a hold of a button, and are repeated, albeit in different locations. All are, however, optional, though some will try to flesh out story elements for in-game characters or factions. All of them reward you with one of the three weapons types, ship parts, rite upgrades, or (most often) credits, which can be spent at various docking stations throughout the game on ship upgrades, both defensive and offensive.

Now I must confess I struggled with some mission objectives' discoverability, specifically early on locating some story-necessary salvaged cargo, even when using the rite of senses, and it wasn’t just the once. There were so many little white triangles popping into view that I found myself going around in circles getting frustrated that I couldn’t find the specific point I needed, especially given there was no real visual reference to orientate the ship to know where I had already searched. Some locations are also awash with the same neon blue colour, representing undiscovered memories and life forces that Nara’s ability reveals. 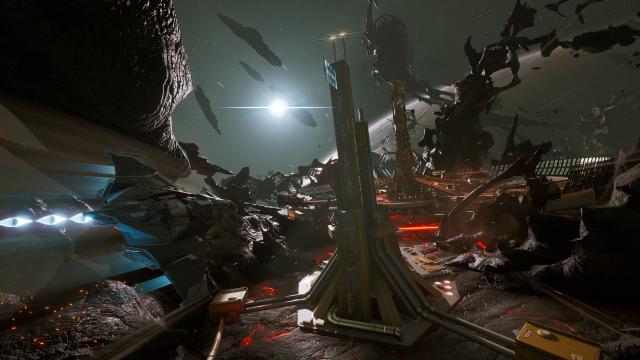 Fortunately, salvage objectives are not the main thrust of the game, and when an early story mission reconnects Nara with the sentient ship Forsaken, adding a new rite in the process (the drift trance), the real shining star of the game bursts through. Nara’s abilities make combat and dog-fighting perhaps the best I’ve ever experienced in the genre. Holding the drift button allows you to maintain your initial momentum, concurrently giving you full 360 degree control of ship alignment. This works dynamically on two counts, firstly quick manoeuvrability for precise weapon aiming, and secondly releasing the drift trigger allows you to re-engage flight in the faced direction, meaning all kinds of angles can be instantly created on a dime.

Once used to the mechanic (there are ability puzzles housed at all rite locations that essentially act as a tutorial), the joy of flight and fight is exhilarating. Weaving through space installations, around asteroids and space debris, while in a heated battle, is always exciting. It has a kinetic energy that only increases when taking on dreadnaught and similar class opponents, requiring diving through ship sections to take out critical systems at great speed, with enemies on your tail and turret fire fizzing all around. 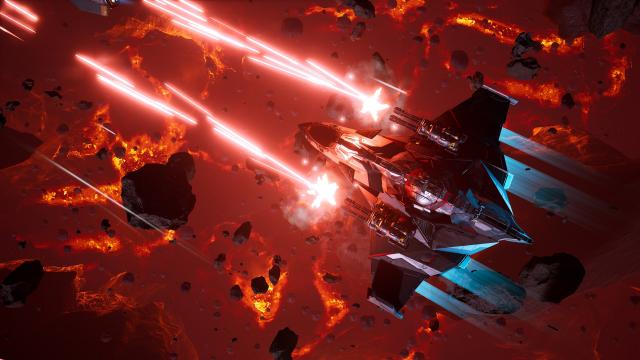 Nara’s additional rites gained through story missions add to the enjoyment, and though you have limited uses that charge with time, you can combo the abilities to great effect. Flying towards an asteroid surface with multiple tails on you, drifting a 180 turn while disabling their systems, sending them crashing into the surface as you boost away in the opposite direction is never not thrilling. It’s difficult to criticise any aspect of the combat, except indirectly towards a difficulty imbalance late in the game. Perhaps this is due to perks stacking that are tied to performance objectives, which boost weapon, ship, and rite effectiveness, especially if you partake in a plethora of side content.

An imbalance is also felt throughout the narrative thread of Chorus. This partially down to falling into the open-world trap of momentum issues, but more so down to stilted dialogue and sometimes questionable voice acting, combined with awkward cut-scenes and an often jarring, internal, raspy voice from Nara. That’s not to say there’s nothing of value narratively; interesting lore elements colliding against the darker themes of human nature are touched upon, and the relationship between Nara and her ship Forsaken is perhaps the most interesting character relationship. However, many story elements felt a little superficial and left me cold to what I suspect they wanted to achieve. 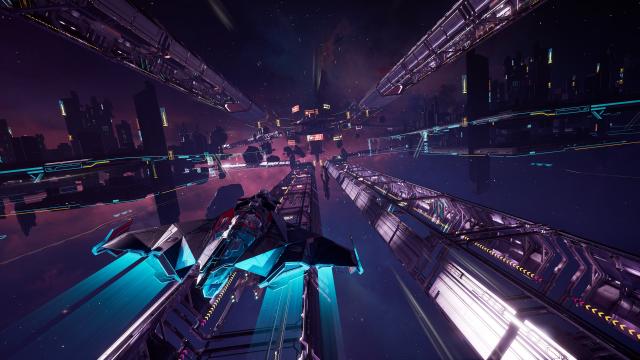 It would be remiss of me not to mention the technical issues encountered throughout my 20 or so hours with the game. Most are mildly frustrating, be it mission failed parameters being slightly off when a thief ‘escapes’ despite still clearly being in view, or a random encounter triggering, then snapping out of existence half-way through. However, the most egregious was at the end of a roughly 20 minute critical story chain, where I suffered seven consecutive crashes (with no option to save during a mission chain) before finally proceeding; a warning to heed if the sadomasochistic out there want to try the permadeath mode.

If you can look past the flaws, there are some real highs in the kinetic brilliance on display in the fight and flight element of Chorus, making it worth considering, even if it can’t be wholeheartedly recommended based on all elements of the game. There may be a chorus… but there isn’t quite a harmony.

This review is based on a digital copy of Chorus for the PS5, provided by the publisher.

This game looks great in those screenshots. It's a shame it didn't quite come together but I might still check it out.

I bought it. Be here on thursday.

Thanks pal. I still think it's worth giving a go, elements of the game are deserving of a much higher overall score, it just gets dragged down by others.