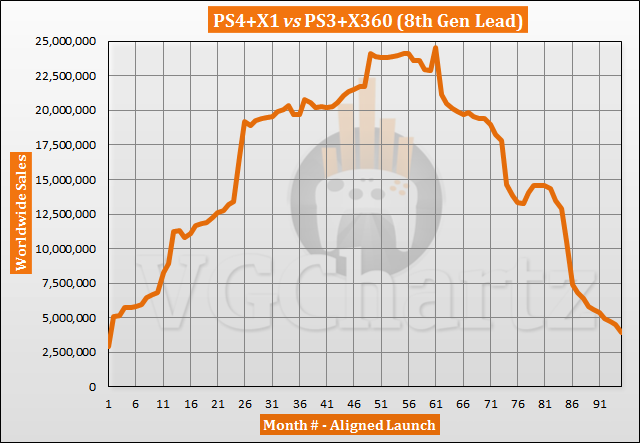 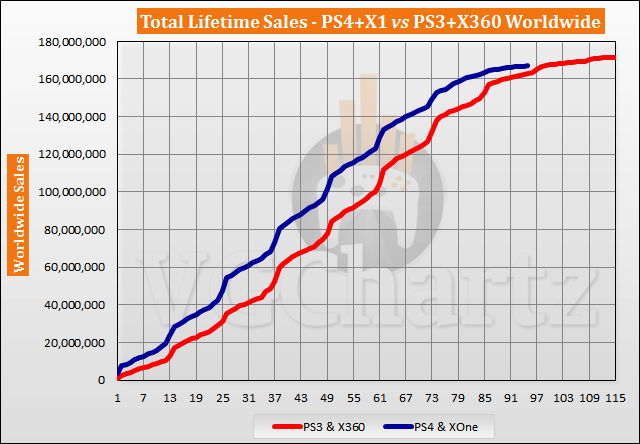 This is one of the most fascinating graphs of VGChartz

Xbox one did not carry their weight here, really dropped the ball with the high price point with kinect as a package. PS4 and X1should have easily won this .

I wanna see the lines cross before the comparison ends.

To me, the main takeaway is that the "traditional" console market didn't really change that much from Gen 7 to Gen 8. On average, 20 million or so new modern consoles per year, effectively a bit more given generational overlap is a thing.

Thinking back, if we exclude Nintendo's consoles (just because they've been distinctly different since the mid-2000's), the combined sales of the Xbox, Dreamcast, and PS2 through 2006 were roughly 150 million. Again, that's a bit more than 20 million per year, given that the Dreamcast came out in 1998 and 1999. Even if we included the GameCube, the annual sales would still be below 25 million new consoles sold per year. In other words, the "traditional" console industry seemingly hasn't grown very much since the PS2 era.

That's not to say the industry hasn't grown at all; software sales in particular grew through the 00's, with retail sales seemingly peaking during the 7th gen, at which point you also started getting digital sales, DLC, subscription services, etc. And of course, the fact that consoles and gaming PC's afre fairly similar nowadays means it's easy to make more games available on more platforms.

Nevertheless, I think it's worth pondering, given how 10 or 15 years ago, I'd have thought that the expansion of markets in new regions (mainland Asia, Africa, South America, etc) would have led to significantly more sales.

The trouble was a lot of that post PS360 expansion coincided with and was taken up by the rise of mobile and then you had Asia being much different to the West with gaming being mainly PC based with a thriving internet café scene.

This is why I expect the PS5 to not reach 120 million and likely fall short of 110 since the stronger competition from Xbox will prevent it from going further than the PS4 or even reaching it unless this gen grows by a notable amount and after three in a row where that didn't happen it probably won't again.

A complicated comparison each way. On the one hand, the failures rates of both the 360 and the PS3 were much higher, and many people re-bought systems to replaced failed one. On the other hand, the mid-gen refreshes of the Pro and the One X caused some people to re-buy systems too. I tend to think this comparison unfairly benefits the PS360 era because at least with a "Pro" console you can re-sell or even just give away the old one, so many of those found their way into new hands. So the PS360 era will probably be the ultimate winner on the graph, but I suspect more 8th-gen consoles were actually in use simultaneously due to the high failure rate of the 7th-gen.

To the moon and back.

I feel like if it wasn't for chip shortages the 8th generation systems would win this. Sony and Microsoft obviously had to make cuts somewhere to get more PS5 and Xbox Series systems out there. I think it's because of that these consoles got dropped hard.