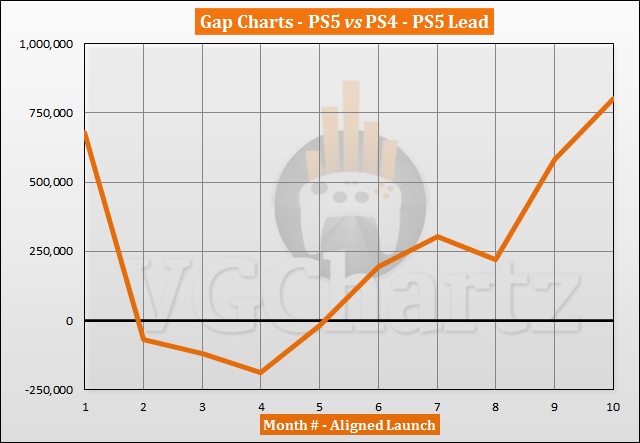 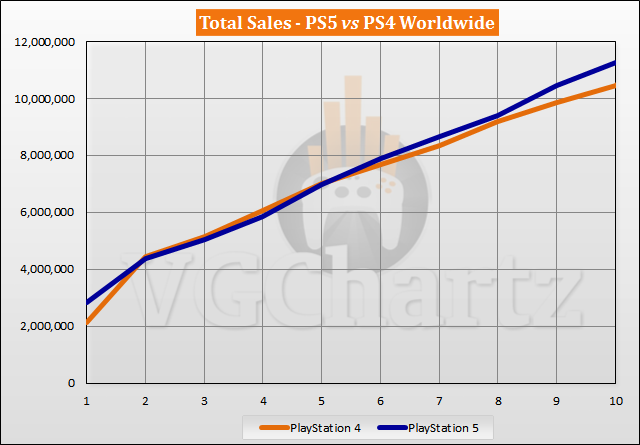 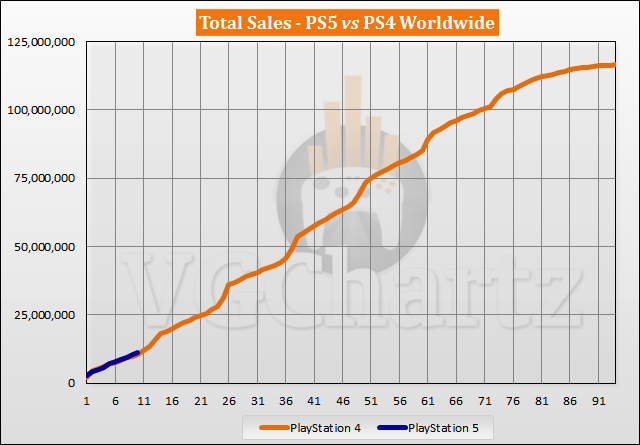 The PlayStation 4 did not reach current PlayStation 5 sales until month 11 when it sold 12.09 million units.

And ps5 has massive shortages,freaking insane!

I still don't get it

Don't get what? Why there's such demand for the PS5?

Yeah, I struggle with it a bit too, but mostly from the software side of things. You can go PC and save a bundle on software cost. You can go Xbox Game Pass and save a bundle on software too. With PS5, the software cost is just really high. And the box itself is big and unwieldy for many entertainment set-ups. And almost everything is cross-platform between PS4 and PS5 right now, so there's not a lot of software you're missing out on to not have a PS5. I certainly wouldn't pay a scalper for one, that's for damn sure (especially since that rewards the scalpers). Even if I were a big Sony fan, I might just rock the PS4 Pro until such time as they release a size-reduced version of the PS5, that thing is WAY too big for anywhere I could put it. But I'd have to really be into Sony exclusives, given the trend in software pricing doesn't favour Sony in any way.

I went with the Series S in part because I wanted something small, compact, and good on electricity.

Most people don't buy that many games a year. Many only buy the newest sports game or COD game and maaaybe a few others so all they care about is getting the same console as their friends. There's other reasons but that's the biggest one I think

Like it was said before, Game Pass isn't a great proposition for people that only buy a couple games a year. And PC isn't really "saving money", as the entry cost is a fairly high cost for a good PC.

Myself, I prefer owning my games and streaming services don't allow for that.

Yes but the PS5 doesn't have all that many games that a PS4 also doesn't have yet. People can literally wait a year and get the PS5 when it's the right time. There is no "it" software for the PS5 nor are there too many PS5 only games. Why buy a PS5 in 2021 is beyond my understanding

And don't get me wrong I want consoles to sell well but there should be some reason for things selling. This is all just based on marketing and nothing else

Well as a ps5 owner, i bought mine to play PS5 exclusives. As a primarily singleplayer gamer, these are my bread and butter and Ratchet is one of my fav series. There are a lot of reasons for people buying this, upgraded graphics, innovative controller, friends on the same console. But i would guess the main reason would be the exclusive games which you generally cant play elsewhere (except for much later on pc). A lot of people will be buyingbthis on trust looking at forth coming exclusives and trusting that sony will deliver the goods. That i suspect is their greatest strength against MS who havent yet managed to foster that sort of consistent quality with most of their ips.

What you say makes a lot of sense to me. I had an Xbox One X, and upgraded to the Series S. It's only a relatively small upgrade in horsepower, but it's a huge upgrade nonetheless. I got a massive improvement in loading speeds, and I got cool next-gen features like Quick Resume and hardware accelerated ray-tracing. Also, One X versions of games tend towards high-res but low frame-rate, whereas Series S versions of games tend towards lower-res and higher FPS. I prefer higher frame-rate over higher-res, so the Series S is more in alignment with my philosophy. It's also much smaller and better on electricity.

That said, I also agree with @Eagle367. People are salivating over this thing whether they would benefit from it as much as you, whether they have to pay a princely sum to a scalper to get it. Even though there aren't yet a lot of games specific to it. Even though it's so huge as to be unwieldy in a lot of entertainment set-ups.

I think the PS5 can be a sensible upgrade for people who happen to love Ratchet, or don't have a PS4 Pro yet, etc. But for most people, I don't see it being enough of an upgrade to wait for hours in queues only to not get one, or to pay a premium to a scalper, etc.

Can't you wait then? There are barely any ps5 exclusives. I would get it if it started selling closer to horizon and GoW and other games. There are no big sellers on the PS5 yet. Ratchet and Clank doesn't have that big of a fanbase and returnal literally didn't have a fanbase to begin with. Everything is else on PS4 no?

you could say the same for series X/S,

For sure you can, but I think @Eagle367's point was the frothing at the mouth for the PS5 doesn't make sense to him, and the demand has been there for the Series X|S but it hasn't been quite as crazy. Plus there are several magnitude more upgraded for Series X|S games than there are upgraded for PS5 games, so that's arguably a much stronger argument for X|S over 5.

Actually, I was a person who only bought a couple of games a year. In my case those couple of games were usually some combination of Halo, Gears, and Forza Horizon, so it worked well for me.

However, Game Pass has transformed me from someone who only played a couple of games a year to someone who has discovered a bunch of other games I enjoyed. A recent example was The Ascent, and I might give Hades a try as people keep saying good things about it.

I think I'm not alone in Game Pass having a transformative effect When games cost $60-70 (or in some cases now a $80 for a digital deluxe edition that contains both last-gen and current-gen versions!), it's the cost of games that had reduced me over time from someone who bought a lot of games every year to someone who was playing very few.

So I think it depends WHY that person is only playing two games a year. Is it only because they're into COD and Madden? Or do they have an interest in other games, but it's too expensive to buy a bunch?

I agree with almost all of that

Some of what you are talking about isn't exclusive to PS5 for example game pass is on xbox one and series X/S like PS5 also has it's share of crossgen titles like Halo infinity and it's also selling out so the same question could be asked of it.
Ignoring the fact that any PC discussion falls into a more general PC v console category , with PC you have a significant upfront cost and the PS store also discounts games all the time plus their 1st party tend to drop in price., another factor in not leaving to go to PC is the PS ecosystem, and all those games and friends in one place , this along with PS5 BC also helps when deciding to move from PS4 ,so while it may look to some to be counter intuitive at the moment to buy a next gen console 8 years of PS4 is enough for many.

Good points there. I ultimately don't begrudge anyone wanting to upgrade their PlayStation experience to the 5. I mostly question the frothing at the mouth over it, being willing to pay a huge premium to a scalper, etc.

No I get selling a reasonable amount and everything. XSe isn't selling insane and it's not like the PS5 which is breaking records and scalpers are selling it at an insane premium. I don't get mad at it or anything I just wanna understand because it's confusing to me. Why is the PS5 setting records for PlayStation sales? Is good marketing really that important. If so, then games don't sell consoles, good marketing does and I think that case can be made can it not?

Sure the Series X /S isn't selling the amount of units that the PS5 is but you have to compare it to last gen , PS4's install base automatically gives them impetus and a large head start when it comes to the PS5 , one reason is AMD when setting both consoles chip contracts with TSMC does so using the previous gens output as a guide while also ensuring access to extra capacity this gives the PS5 an output advantage from the start, and that PS4 install base also helps when it comes to selling that output , because the 40 million more PS4 consoles sold over the PS3 means an increase even without any growth in the percentage of PS5 early adoption figures when compared to PS4 early adoption rates so these factors helped more than marketing.
Now for series X/S taking into account where it's come from and it being MS's fastest selling console while not having the natural impetus that the PS4 sales numbers add to the PS5 , it can be seen to be seen as just as big a success and you could also use them as an example of how much more successful your marketing can be when it finally has substance behind it.

You make a lot of excellent points here. And this is the first suggestion I've heard of a good reason why the foundries might be shipping a bit more product to Sony than Microsoft.