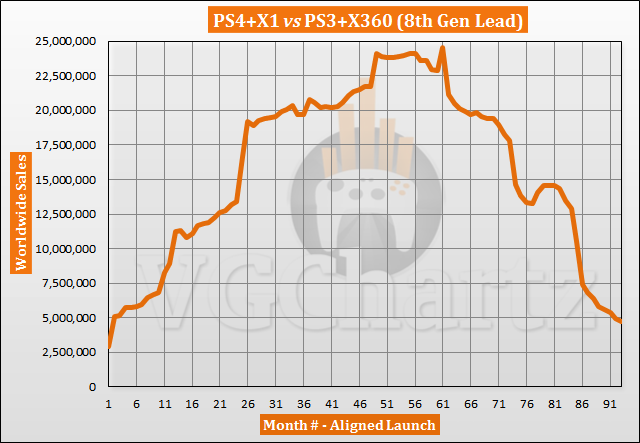 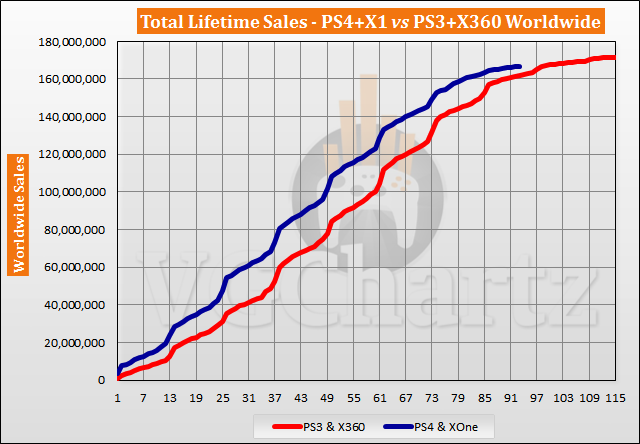 PS4 carried most of the weight here.

This sales curve is actually normal for PX4+XB1. It's the 7th gen one that is weird. PS1 and PS2 were on the market for 6 years before getting a successor. That is the normal amount of time before sales die down. After 6 years, people are ready to move on to the next generation. The reason PS3+XBox360 lasted longer is that people were slow to buy them at first. They launched at high prices, so a fair amount of people bought the low priced Wii at first. After around 2010, the Wii had nothing going on, and the HD consoles were around $300, so that was the ideal time for people to buy one of these systems. This resulted in Generation 7 lasting longer than normal. In the end the total user base is about the same though between Generation 7 and 8.

I can remember people saying in 2019 that this was in the bag...

In a month or two, the 7th gen will surpass the 8th. The PS4 couldn't compensate for the XBOne's lackluster sales.

month or two ? we have at least till the end of the year for them to pass the 8th gen. However after this there is no turning back for the 7th gen. 8th gen are not making 173M.

Well, didn’t the 7th Gen consoles have their lifespan stretched out a bit more and the 8th Gen consoles are already out of production so that’s not really surprising.