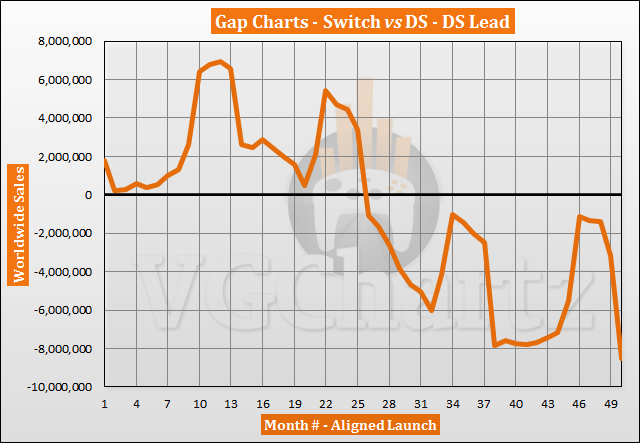 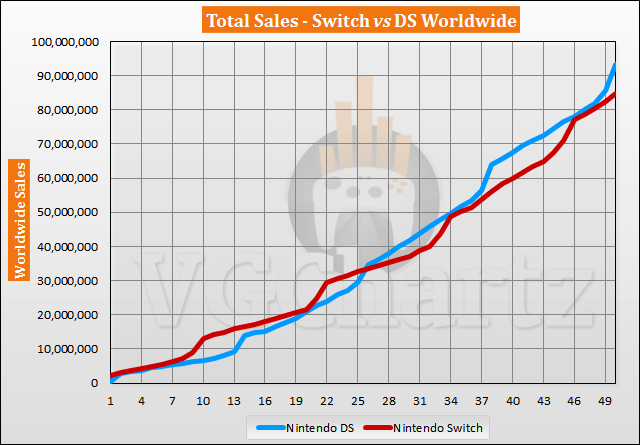 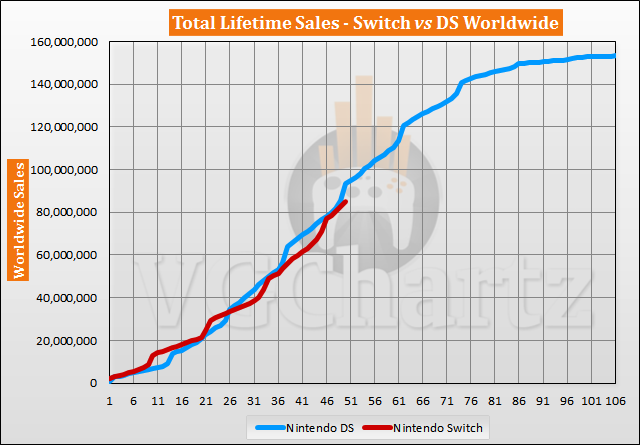 April 2021 is the 50th month that the Nintendo Switch has been available for. During the latest month, the gap grew in favor of the DS by 5.33 million units when compared to the Switch during the same timeframe. In the last 12 months, the DS has outsold the Switch by 639,308 units. The DS is ahead of the Switch by 8.51 million units.

The 50th month on sale for the Nintendo Switch is April 2021, while for the DS it is December 2008. The Switch has sold 84.88 million units, while the DS sold 93.39 million units during the same timeframe.

If Switch can keep up with the DS this coming year, then it has a good chance to sell around the same, if not more than the DS did.
The coming year marks the last one where the DS sold exceptionally well. Next year it will still sell very well, with ~20M. But from there, it will just add another 10M in total sales in part because the pricecut of the 3DS killed it's legs, and I don't see anything similar happening to the Switch.

If Nintendo's public messaging is to be believed, there won't be a replacement until holiday 2024-holiday 2025. So I agree.

but in the comparison it must be considered that Switch is like saying Nintendo, DS was not the whole Nintendo, it would have to sell a lot more to be comparable

Last fiscal year Nintendo had their most profitable year ever by far. Way way more than their previous peak, when both the DS and Wii were at their peak and Nintendo sold over 57mil units of hardware in one year.

The units sold do not warm my heart too much, the profits of a company warm me zero: D
however, profits can rise even with lower market penetrations, good job nintendo!

Of course, April vs December, that's why the gap is wider for now

Switch needs to sell more in 2022 than in 2019 for a chance to beat DS, which means next year must also be a 20M+ year for Switch – which is quite possible if we see 30M this year.

That won't be hard, only a huge drop off would lead to a sub 20mil year and we already know of Pokèmon Legends: Arceus and Splatoon 3. I would be surprised if the year would end below 22mil.

DS had massive holiday season and this is why the Switch took a big hit. But i do believe that it will be able to keep up the pace since it will sell around 30 millions this year. In the long run, it will be able to catch it up since the DS fell off quickly and Switch is still very healthy with again, revision and price cut still on the way.

Under "Switch" are graphed two consoles, I don't think there are a lot of "home gamers" but there are. The DS's greatness is this chart, one console beats two good consoles.

DS had double the models than Switch has right now. OG DS, DS Lite, DSi, DSi XL are four consoles against two, if we apply your standards.

you don't apply "my standards" correctly.
In the DS family there is the natural evolution of electronic objects: adding technical features, and removing unhelpful features (such as the 3D on the 3DS, or Wii backwards compatibility). Switch and Lite are even different categories

The thing most people usually use to differentiate between models of the same device and different devices is the library. Switch Lite and OG Switch have less games that play on one model but not the other (games that don't support handheld mode or need detached Joyons), than DS and DSi. Even not considering the GBA-slot that some models missed (as that is backwards compatibility), the DSi had a bunch of games only working on that model (more than 300 actually, although most released only in some regions). Still that wasn't enough to be considered their own library, so both models are counted as the same device. But you consider the addition of internet, download games and camera as less of a differentiation than a handheld only variant?