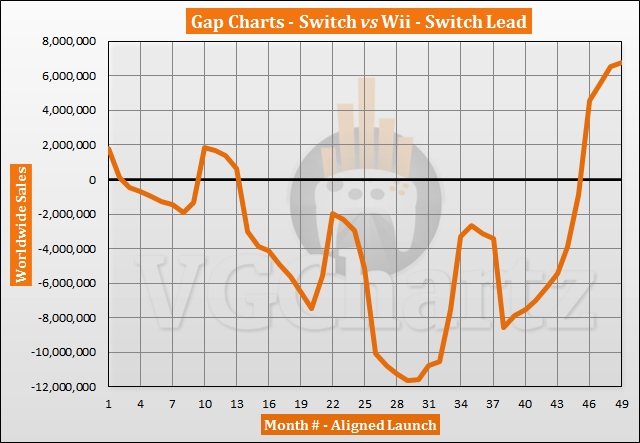 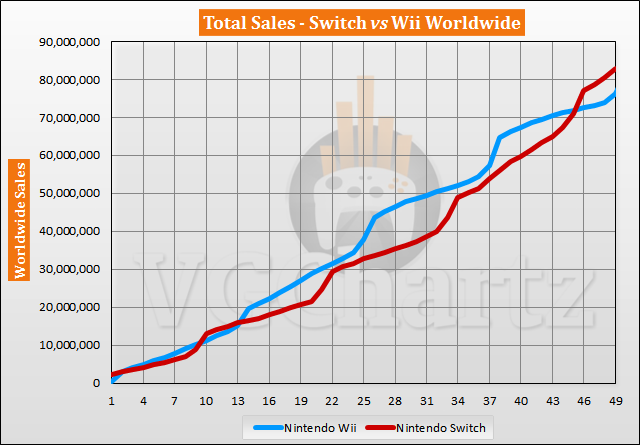 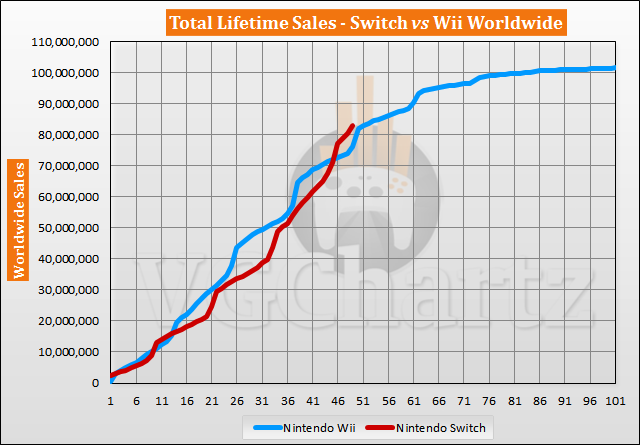 The 49th month for the Nintendo Switch is March 2021 and for the Wii it is November 2010. The Switch has sold 82.93 million units, while the Wii sold 76.19 million units during the same timeframe. The Wii sold current Switch sales in month 51.

The Wii sold 101.63 million units worldwide during its lifetime. The Switch needs to sell another 18.70 million units to outsell the Wii.

Annnnnnnnd it's over. Month 50 was the last chance wii stood at getting the paths to cross one more time, but the Switch sold enough to keep it head of that. Switch will remain ahead from here on out and outsell it by the end of the year.

Yeah. I was going to say should we call it? It's extremely unlikely the switch will fall behind again and likely it will outsell the Wii within a year if not by the end of 2021.

At the time black Friday wasn't nearly that big and most sales by far and wide still happened in December. Compare that to these days, where Sony and Microsoft generally have bigger Novembers than Decembers, and even for the Switch November sales are creeping closer to December sales

I guess I mainly look at the year in general when it comes to the older generations and not really the patterns that much so that is interesting to know.

It is still pretty impressive for March to beat Wii's November when it had one last good holiday tbh.

Switch is doing well, but not that well

Haven't you seen the last Switch vs DS Comparisons?

I think the Switch vs DS is a great comparison alongside the PS3 and Xbox 360 as those are the two comparisons where the winner has not been clearly decided yet.

Well it's officially completely over from here on out. The Wii's last chance to outpace Switch sales temporarily was this holiday season but seems like it fell just short to the crazy selling Switch. The Switch will continue to rapidly expand its lead going forward and will never look back.

Okay I start to believe that cliff will never actually occur.

Just hold out a little while longer. That cliff will show up any day now...

The Switch is climbing the cliff.

It did, just upside down

I think its time the Switch starts getting compared to the PS3 and Xbox 360 like the PS4 did. I made a chart about it and the Switch is competing against it extremely competitively.