The Wii U port, Pikmin 3 Deluxe, released for the Nintendo Switch on October 30 and is already the best-selling entry in the franchise in Japan with over 500,000 units sold.

The game in roughly two months has sold 513,225 units in Japan, which tops the original Pikmin on the GameCube with 502,996 units sold. Pikmin 2 ended up selling 483,027 units in Japan. It should be noted the figure doesn't include digital sales. 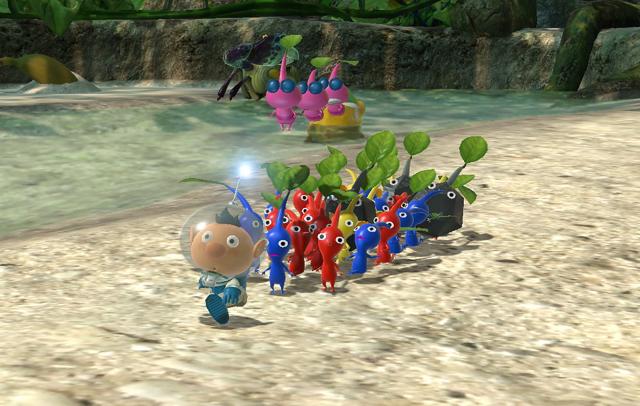 Here is the list of Pikmin sales in Japan:

Direct comparison with the other games.

Nintendoland. And if anyone says it's not relevant, I'll cry.

Yeah. It had some good games on there. Zelda and metroid in particular. But they were all pretty fun.

Wonder how it went in the west. Like US, UK & Europe and Australia and New Zealand i did get the game.

After Mario Party, Smash, 3D Mario and Animal Crossing we have another best selling game of a longtime franchise on Switch.

Hopefully pikmin starts picking up steam like fire emblem and animal crossing. Maybe we'll get pikmin 4 soon. It has only been 8 years since pikmin 3. Lol.

I don’t really care that much for Pikmin, but this is excellent news for Pikmin fans! As it shows Nintendo that there is an audience for the franchise and it has potential if given the chance.
Hopefully this will open the door for some other dormant Nintendo IPs to make a comeback like F-Zero, Star Fox, and Earthbound.

This does make sense, that with the success of a game of old Nintendo consoles it is encouraged to remove forgotten IPs instead of waiting to see if they marry a sequel

It will reach a million in Japan someday, it's incredible to say the least.

Makes sense, this is the first mainline Pikmin game on a handheld, and the Switch is in its way to become one of the best selling consoles in Japan. It would be weird if it wasn't the best selling one.

Glad to see it doing well. Hope it manages to do the same globally.

It hasn't even been that long at all it's selling fast

No, If Pikmin 3 deluxe is so successful then Nintendo no longer needs to make Pikmin 4, the same thing will happen as with Mario Kart

I don't think that's the case. Another Mario Kart would canibalize the sales and playerbase of the first one, whereas Pikmin 3 doing well might make people want a sequel.

How you explain Zelda BOTW sequel?

Zelda BOTW came out at the same time on both consoles, it is not a sequel to the previous console

Even if Pikmin 4 won't release on the Switch, it will come eventually because Pikmin 3 Deluxe shows, that the franchise has potential.

Only when Pikmin 3 deluxe stops selling will they release Pikmin 4, perhaps on the next Nintendo console

Based on those sale curves they could release the next game in about five months time as sales won’t be very strong by then.

Strong sales are good for the chances of Nintendo releasing a sequel, but sales are not strong enough to make this another evergreen title that Nintendo will be hesitant to replace.

Nintendo will not make a sequel to Pikmin or Mario Kart in a long time so as not to spoil the sales of the deluxe versions, this will be the case until these versions stop selling what is expected for Nintendo

It most likely didn't. I mean, I'm almost totally convinced that it didn't. It's quite curious that it did so well in Japan in the first place.

Maybe it already did. But since we don't have concrete numbers for the other regions, only Nintendo have this information. Maybe they will share some info if it cross 2M in sales... Or not. Who knows. This franchise won't pull some big numbers to be bragging about it, that is certain

We will get an update in Nintedo's next quarterly report assuming it has shipped over 1 mil, which seems very likely.

If Pikmin3 DX does Xenoblade numbers then im sure it is saved.