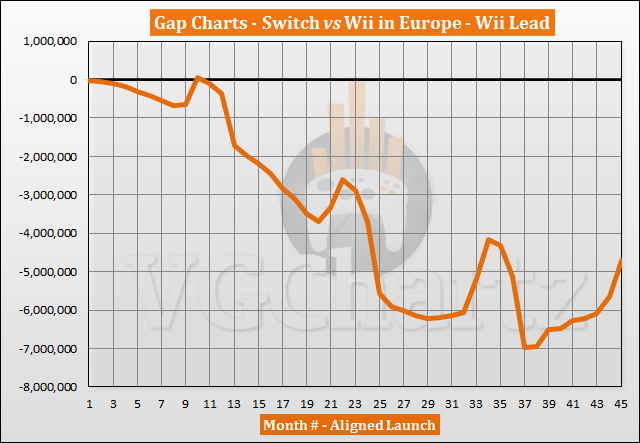 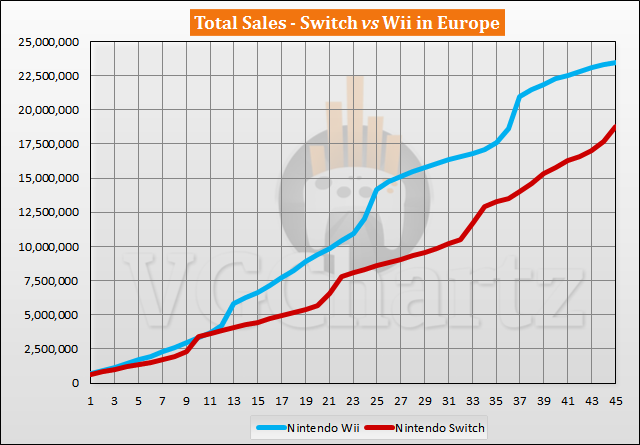 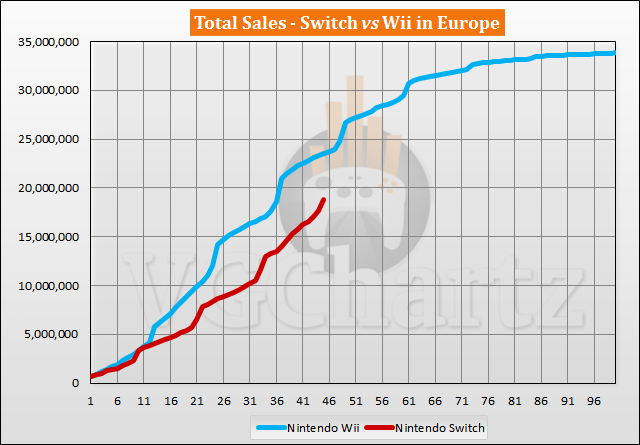 November 2020 is the 45th month that the Nintendo Switch has been available for in Europe. During the latest month, the Switch closed the gap by 940,259 units when you align the launches of it with the Wii. In the last 12 months, the Switch has outsold the Wii by just 457,127 units. The Wii is currently ahead of the Switch by 4.71 million units.

The 45th month for the Nintendo Switch is November 2020 and for the Wii it is August 2010. The Switch has sold 18.76 million units, while the Wii sold 23.47 million units during the same timeframe. The Wii sold current Switch sales in month 37.

The Wii sold 33.88 million units in Europe during its lifetime. The Switch needs to sell another 15.12 million units to outsell the Wii.

The upcoming holidays for Wii is the last big one. Switch won about 500K over 12 months, let's see how that changes once the next Wii holidays are through. With only 500K a year Switch would need 10 years to catch up. But the Wii slows down in the future. If Switch peaks later, then I see a chance that Switch catches the Wii in europe.

It's hard to say for sure. I think it's a better than 50/50 chance the switch outsells it. After this year the answer will be clearer. Depending on the games that come out in 2021, it could be the peak year. But if it's higher this year than last, it won't be by much.

Thinking the Switch won't be replaced until 2023 at the earliest. 2024 at the latest. So it has a pretty good shot.

Month 70 would be my prediction if it happens. Otherwise, I think it won't be possible.

Well, currently Switch is in the holidays, Wii has it's holidays a bit later, because they launched at different times in the year. The 12-month gap change is a bit less than 500K in favor of the Switch.

Switch will do 40+ million in Europe well maybe