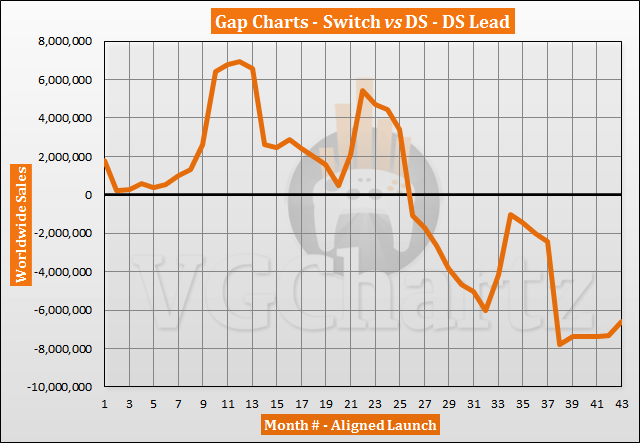 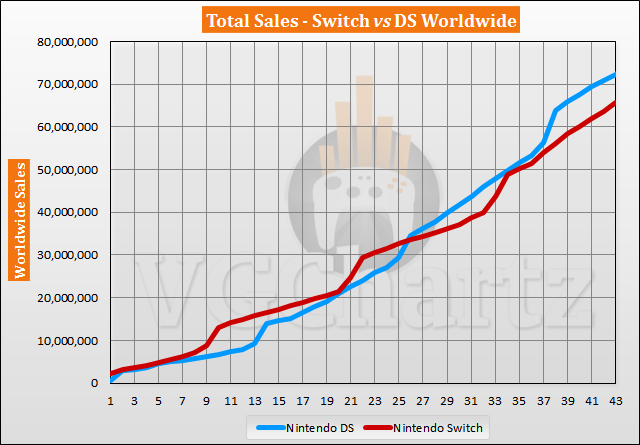 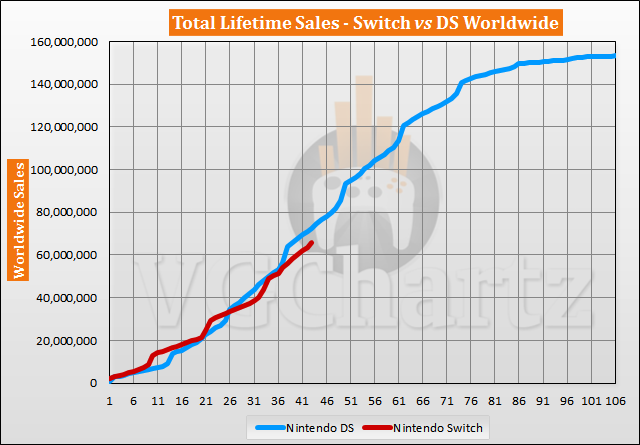 The 43rd month on sale for the Nintendo Switch is September 2020, while for the DS it is May 2008. The Switch has sold 65.71 million units, while the DS sold 72.34 million units during the same timeframe. The DS reached current Switch sales in month 39.

Expected Switch to only pull ahead by a little this month, but it actually did 700k+ more than the DS. Switch is doing more than just barely keeping pace with the DS. It's seriously gaining ground and the holidays are still ahead. It will probably end up close to tied with the DS, launch aligned, by the end of December. Also, the Switch only needs to keep pace with the DS to outsell it in the long run. The DS had the steepest sales decline of any successful system ever.

It got smacked hard by the iPhone, which swooped in and stole the late adopter market. But I think the Switch has kind of outdone iOS/Android and is winning back that segment. Maybe we'll see, in the Switch, closer to what the DS could have otherwise achieved.

I do think some of these mobile games that Nintendo makes, like Animal Crossing Pocket Camp, are helping bring people back to the Switch. These mobile games are really marketing for the main Switch games.

That Switch is even able to match the momentum of the monster that is the DS for a while is a real incredible.

Holy shit the Switch is gaining a lead over the prime DS! The Switch will reach an astronomical number of sales, maybe 140M. Its funny cause just last year people began saying it was over between the DS and Switch comparison but the Switch is not only holding its ground, its gaining ground. Who would have thought after the disaster of the Wii zu the NX or Switch would be able to sell 30M in one year, which is more than twice the Wii U's lifetime sales that took 4.5 years to reach 13M sold.

The Switch should be able to keep up with the DS, gaining and losing some ground here and there, within the next 2.5 years. The question mark will be in the legs. Month 77 for the DS is when the 3DS came out, unless I'm mistaken. Then, once the 3DS got its price cut down to $170, on top of being backwards compatible, DS sales plummeted. They went from 20 million in 2010 to just ~8.8 million in 2011, then 3 million in 2012, and a dismal 800k in 2013, and that was all she wrote.
If the Switch's legs are stronger and sales hold respectfully well after Switch 2 or whatever their next system is comes out, then the Switch will have a very good chance of passing the DS.

It can do 150 ++ Nintendo give switch time and games and it can definitely do it!

Just the fact that the Switch is able to keep up with the DS at it's height is crazy enough, but now the Switch is actually gaining ground a bit, which is absolutely insane!

Damn switch is actually gaining ground. It could be the one to outsell both PS2 and DS