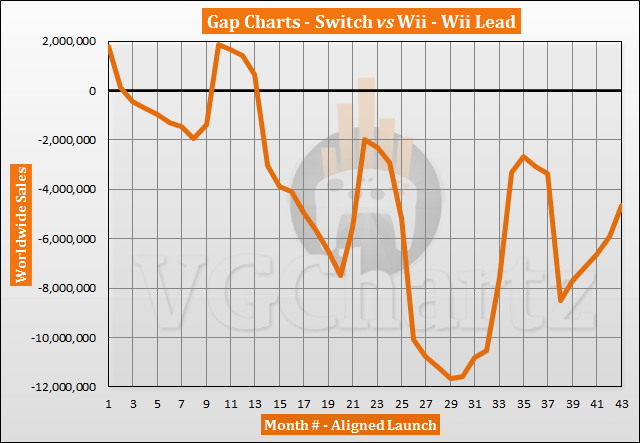 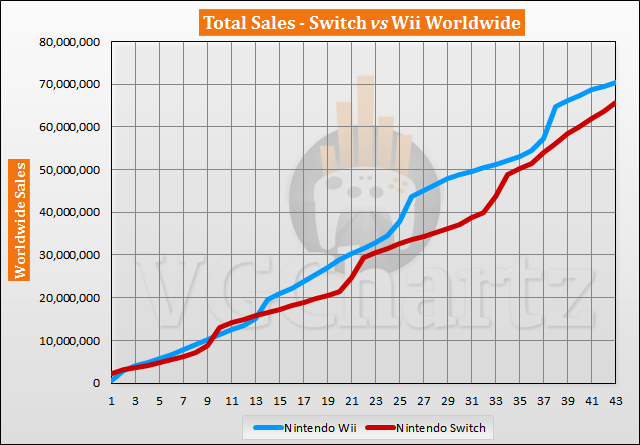 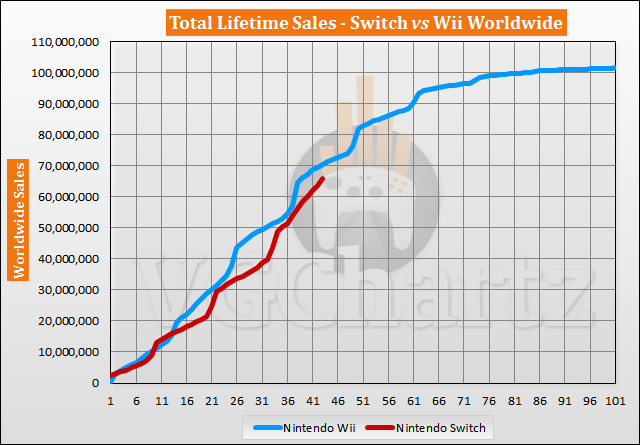 The 43rd month for the Nintendo Switch is September 2020 and for the Wii it is May 2010. The Switch has sold 65.71 million units, while the Wii sold 70.38 million units during the same timeframe. The Wii sold current Switch sales in month 39.

The Wii sold 101.63 million units worldwide during its lifetime. The Switch needs to sell another 35.92 million units to outsell the Wii.

I'm not even sure anymore the Wii can pass the Switch again with it's holiday season. If Switch sells over 13M during this quarter, it might get very tough for the Wii to catch up again.

Yea, this seems like the last time the Wii will have a lead over the Switch worldwide, if Nintendo could ship around 30M this fiscal year as forecast its unlikely the Wii will surpass the Switch again after this holiday season, especially since Wii sales from here on out begin falling off a cliff.

There is nothing to push such a number for this Q3, and there is two new consoles in the same time. Best Q3 even was 11,6.

I'm not thinking about crazy Q3 sales, I'm thinking about great continuing sales during Q4. I believe Nintendo could sell 6M consoles during the January-March period if sales stay as high as they are. This, along with ~12M during Q3, should be just enough to keep the Wii at bay and stay in front even after the Wii's Holiday season.

The Wii was a monster of its time, but the industry has seen nothing like the Switch before, which is something like the SNES and DS and half a cup of the Wii (and that dash is growing) all wrapped into one. It'll be interesting, Nintendo can literally bank on the motion capabilities of the joycons for some more expanded appeal games - Ring Fit Adventure has been an excellent test case.

There is no doubt Switch will retake the lead after the holidays, but then we get to a nailbiting thrill with the question if Wii can retake the lead temporarily with it's own holiday season. With the current momentum of the Switch that looks increasingly unlikely, but it will depend if that momentum can be retained in 2021.

Nintendo Switch will outsell the Nintendo Wii very soon. Breath Of The Wild sequel will up the Switch sales drastically next year I'd imagine :)