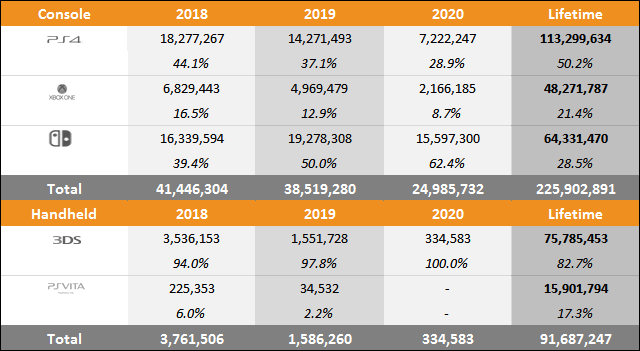 So Switch has managed to sell in 8 months (without holidays) more than the Wii U did in its lifetime. OK

Switch achieved that by end of July already, so really just 7 months.

If Microsoft hadn't cut production so early, it still could have had a chance to do so. But now, chances are next to nil to reach 50M

62 % market share of Switch is close to PS4's peak. Definitely dominating the market. Switch should hold above 50 % even next year.

The percentage will probably keep increasing until November. What was the PS4's peak?

Switch launched during PS4s peak, so sales didn't reach what they couldve. 2020 is the year of NS growing its final major install base before next gen hypes up. Sales will dip but stay strong. Here's hoping a 2021/2022 9th gen Switch will release with no major problems. If Nintendo decided to extend NS family to the entire 9th gen timeframe, Switch could rival PS2 sales imo.