[Note: Although it's standard to inform readers when I've received a review code, this is new territory for me.  I was given six unique review codes for myself and five other friends.  As an early adopter, I've also been awarded 3000 Rocket Fuel (would cost roughly $30 to purchase that much).  So, my experience and overall mood is intricately tied to this.  I still feel as though I'm being honest in my critique, yet can't ignore how this could color my perspective.]

If I were to tell you to get excited for a hero shooter in 2020, the majority of you would simultaneously groan.  Developer Final Strike Games, a freshmen indie team containing notable AAA talent, is confident that it can find its own corner in this oversaturated market.  After some behind-the-scenes complications, the game eventually found itself under the 'EA Originals' publishing banner.  And though the poorly-named Rocket Arena has a foundation that's both nuanced and addicting, specific design fumbles and pernicious monetization methods keep it from rocketing past recent contenders.

Since multiplayer is the cornerstone of this game, there's no semblance of an overarching story for this one.  The concept focuses on 3v3 rocket-emphasized battles in what are essentially gladiator arenas.  Outside of information from character sheets and audio barks when choosing your fighter, there's little context beyond this task: knock enemies out of the ring and complete the objective. 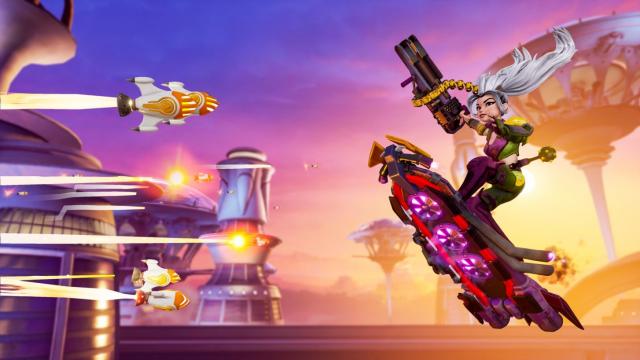 This simplicity doesn't get in the way of what matters: arena brawling.  The core conceit is a blend between Super Smash Bros. & Overwatch.  Each of the original ten heroes has a different basic weapon, a secondary weapon on cooldown, and a special move on cooldown.  In both respects, a hero's personality is reflective of their arsenal; hulking pirate Blastbeard hauls a large cannon with slower projectiles, Kayi is essentially Frozen plagiarism acting as a long-range sniper, Plink is a teleporting pre-teen who fires over a dozen mini-rockets in quick succession, and so on.  As an aside, I'd like an Overwatch-style backstory for Plink just to grasp how a prepubescent boy consented to such explosive mayhem.

The Smash Bros. comparison comes back to the health system.  Your health meter doesn't go down, it ticks up upon taking hits.  Said meter will eventually hit critical mass whereby you're vulnerable to a critical hit shooting you off the map; conversely, avoid getting hit long enough and your meter will slowly decrease.  Flying through the map’s barrier locks you into an animation returning to the fray instead of dying.  When considering how spectacular of a show it is, I'm flabbergasted as to why more games haven't followed this nuanced idea—Smash clones aside.  It's not like Nintendo has a patent on that idea; plus, it's a great way to reconsider levels and game design.

The two main design pillars of Rocket Arena capture its pure mechanical satisfaction.  There is something tantalizing to your lizard brain when seeing your opponent continually propelled back by a fusillade of exploding projectiles.  Learning the rulesets of triple-jumping, leading your rockets or bombs to hit someone in mid-air, managing your dodge cooldown, rocket-jumping, and power-up management all make this a volatile confection I haven't done quite like this before.  Nascent concerns about a child joining a fighting arena go out the window after he's been pestering you for 30 seconds and he's just one headshot away from rag-dolling around the arena before meeting an embarrassing demise.  These feelings may be something worth consulting your therapist about, but not until you've played just one more game!  The audio-visual stimuli baked into this game is that satisfying. 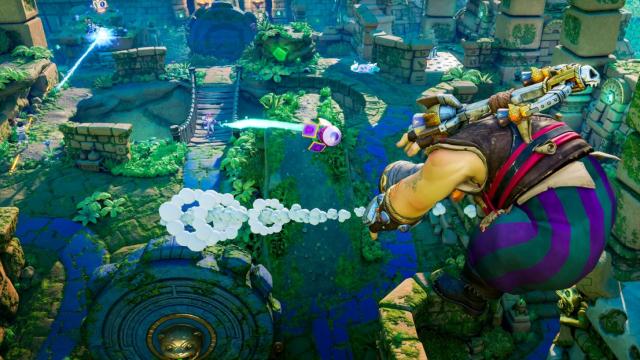 Aside from baseline mechanics, the amount of modes & extras are quite modest.  Numbering ten in total, each map has a theme that corresponds with a specific character.  There are four modes for social play: TDM-esque “Knockout,” Capture the Flag-variant “Rocketball,” Objective capture called “Mega Rocket,” and “Treasure Hunt.”  Although the first three follow your typical modes, Treasure Hunt is essentially two in one: begin with capturing and holding a treasure chest for a point per second and then capture preset coins scattered across the map.  Rinse & repeat until the first team reaching 250 points wins the match.  On top of this, there are other options including Ranked play, AI-focused Rocketbot Attack, Practice, and Custom Games.

Despite a sound structural foundation, the supports holding everything together tend to buckle under scrutiny.  My primary consideration keeps leading me back to another hero-based action game I previously reviewed: Bleeding Edge.  Issues about content aside, I think how each game considers its emphasis between level design, character balance, and modes tells an interesting tale.  Bleeding Edge emphasizes your team's roster based on fundamental expectations of the genre, thereby focusing on how characters can congeal across every map; Rocket Arena puts more stock in a particular mode.  This shift leads to issues of over-inflated character utility dependent on whether its Knockout or Treasure Hunt; you almost feel like a team traitor if you're grinding your main when the team needs another fast hero. 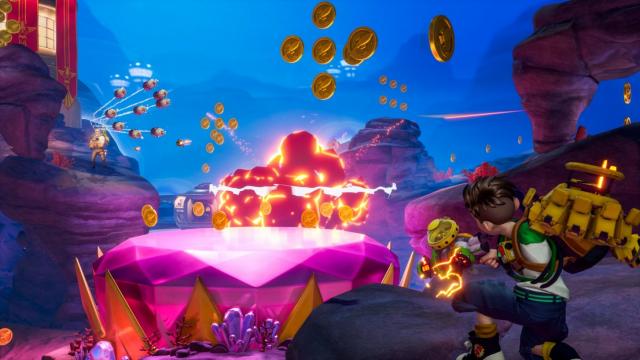 Personal qualms aside, this kind of thinking also infects balancing.  Since it seems like all 10 maps try to accommodate every mode, there's often a jack-of-all-trades approach in their construction.  Not only do I dislike Temples of Jaquaa for questionable hazard placement, the mish-mash mode Treasure Hunt helps emphasize those concerns.  These issues lead to some sizable exploits in team chemistry as well.  If your team goes jetpack-equipped Topnotch, Rev, and Plink for Rocketball?  I'm convinced you don't have a soul.  Something as simple as locking powers at the match's start could ameliorate these frustrations.

Leaving aside heroes in relation to the respective maps, the characters themselves have noticeable problems.  For a game centered around firing & avoiding projectiles it's odd how slow default character speed feels for walking heroes.  Characters with increased mobility - be it hoverboard, teleport bomb, or otherwise - can easily secure higher ground, which is a veritable death sentence against you on some maps.  Because of that, long-distance specialists like Kayi are at a disadvantage once you have an angle past her snow-globe barrier.  I also get the feeling certain gameplay facets were influenced to bump up the importance of artifacts (i.e. selectable mods).  It's tough to say what can be done regarding maps and modes, but character balancing needs addressing.

Rocket Arena's frenetic thrills initially hit so well.  The plurality of heroes have a great synergy with one another and none of the original roster feel overly similar.  Its nuanced health system within this genre goes a long way in complimenting the offensive & defensive stratagems between both parties. Plus, it feels mechanically satisfying.  The issue comes back to character and map balancing.  A part of me feels like this launched as a large-scale beta as a result. 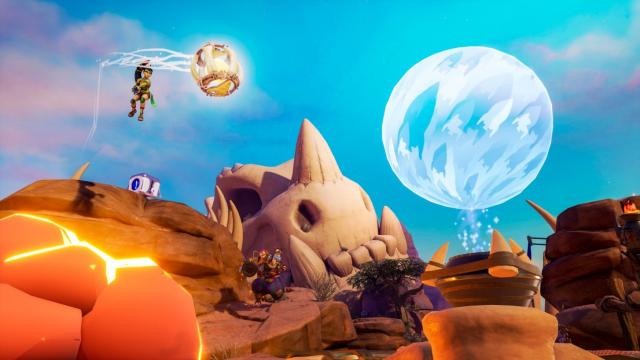 In respect to art style and technical accomplishments, it's a mixed bag for what's effectively a middle-market title.  As previously touched on, one of the best positives can be seen in its handling of Unreal Engine 4.  The action feels crisp even if getting visually overwrought on occasion.  My criticism lays more at the artistic design.  Aside from the recently-added Flux, each female is the same Fortnite-esque character model with a different hairstyle and potentially a different skin color.  Wouldn't be so bad on its own if they didn't feel like rejected Disney princesses or sidekicks at one point, especially when compared to the other half.  Male styles like Topnotch's post-retirement Rocketeer inspiration or Blastbeard's boisterous pirate captain style look more creative.  Map design also seemed to receive disparate attention, with a couple feeling like slapdash visual themes to marry with a hero’s homeworld.

Sound design earns some credit in aurally communicating each individual action.  Whether its knockouts, special abilities, the sound of rockets hurling by, etc., the sheer pandemonium on display ticks all the right boxes.  Although the soundtrack typically falls into the standard fare of up-beat hero shooters and even battle royales like Realm Royale, it's still proficient and blends in well with each environment.  Since the story is scarce, there's not much to go on in assessing otherwise serviceable voice acting.

The value proposition is something that weighs on me in multitudinous ways.  With all modes, maps, characters, and cosmetic extras considered, I think a $30 retail price seems worthwhile, despite the "quantity over quality" angle harming said outlook.  The issues continue when considering this is the most avaricious EA Original title I've seen.  On top of acquiring in-game credits, players can purchase 'Rocket Fuel' with real-world currency, with packs climbing up to $100.  When considering the upcoming 'Rocket Pass' requiring Fuel for its best goodies and a $40 Mythic Edition releasing at launch, you can see why I feel uncomfortable.  There are free updates, characters, and maps coming as the team's proposed trade-off; that said, I think any early adopter receiving 3000 Rocket Fuel is almost an admittance that these are questionable tactics. 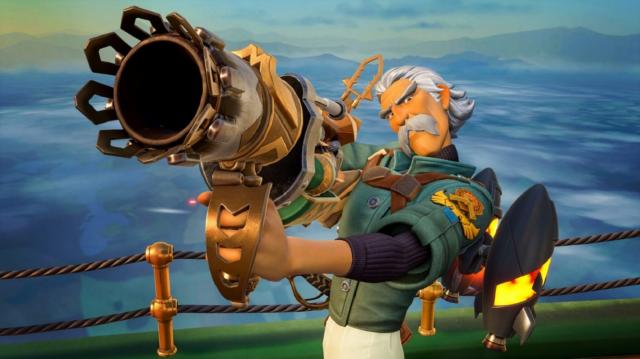 If nothing else, Rocket Arena is a pleasant surprise to a sub-genre that's begging for titles to move the needle forward.  Final Strike Games has hit on a cultural touchstone of multiplayer combat and given its template a distinct attitude all the while.  It's a simplistic mash-up of modern cartoon visual sensibilities tied with old ideas like rocket-oriented maneuvers dating back to my time with Quake 2.  Yet, where the team succeeded with baseline mechanics they fumbled in respect to level design and character balancing.  Those frustrations appear to have seeped into the community at large, as matches have taken longer and longer to find.  Tie this in with publisher maleficence and it begins to feel like its potential keeps getting blasted backwards, every blow reaching closer to a critical hit.

This review is based on a digital copy of Rocket Arena for the XOne, provided by the publisher.