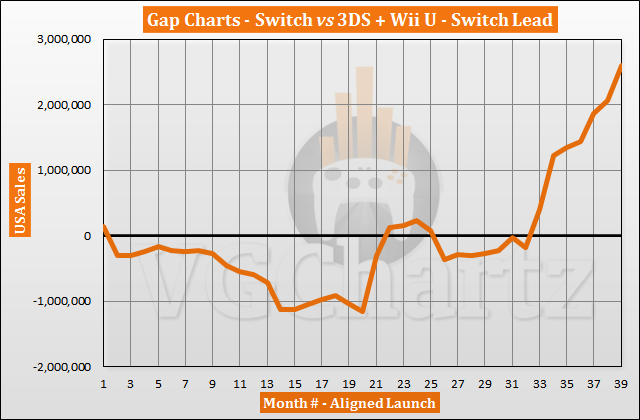 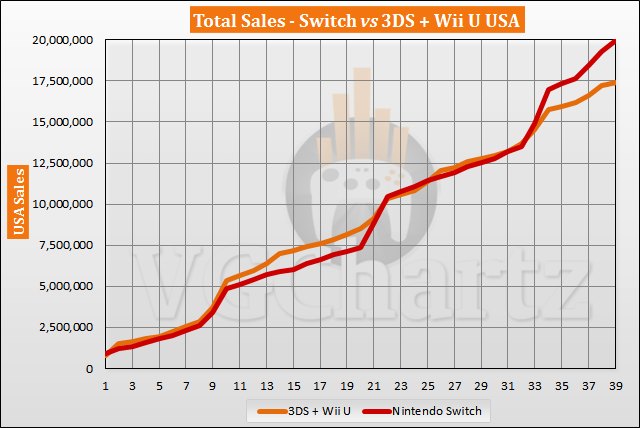 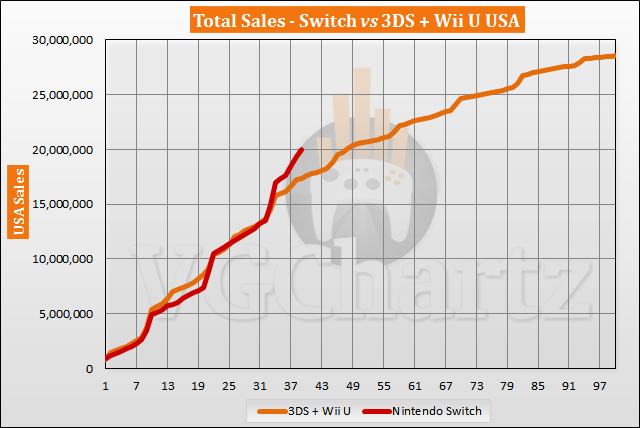 May 2020 is the 39th month that the Nintendo Switch has been available for in the US. During the latest month, the gap grew in favor of the Switch when compared to the combined sales of the 3DS and Wii U during the same timeframe by 531,077 units. In the last 12 months the gap has grown in favor of the Switch by 2.88 million units. The Switch is currently ahead of the 3DS and Wii U by 2.60 million units.

The 3DS and Wii U have sold a combined 28.86 million units in the US. The Switch is currently 8.88 million units behind. The Wii U has been off the market for a few years, while the 3DS is still on the market. However, 3DS sales have shrunk considerably and is selling well under 10,000 units per week.

So if I look at the US sales from last year, then it's possible that the Switch will pass the duo in December already. And even if it can't reach that, then it will be just behind the Wii U/3DS couple.

The months up until May 2020 are all included here. There's no way Switch will sell 8.88m in the remaining seven months of 2020.

How much did the Switch sell last year in the US and how many had been sold YTD?

2020 is at 3m through the first five months, but Switch won't maintain 100% year over year growth throughout 2020. It would need 100% to close the current gap of 8.88m completely. 100% year over year for the full year would be 12m of which 3m are already in the books. But 9m in the remaining seven months isn't going to happen. Not even the Wii's peak year was that high.

Yeah, I mislooked and saw 12 instead of 6M and thus thought it could be possible, my bad.

The 3DS+Wii U sales could comeback. Nintendo already released all their major franchises on the Switch already so most people interested in it already purchased one and the Switch's 3rd Party support will come to a halt once the Xbox SX and PS5 release, which will completely kill the Switch in power spec and graphics once they release. The Switch is in big trouble once they release, It's still in the air whether the Switch could even hit 80M. The Gamecube had a good start and look what happened.

Uh, no. It's given that Switch will hit 100M worldwide, otherwise sales must drop faster than Wii, which is not very probable. XSX and PS5 won't have a huge impact on Nintendo, just like the current gen.

Switch is selling out faster than they are restocked with nothing big on the horizon. It's heavy hitters are out for the most part, but guess what? They are also selling by the million every year since they're real evergreens, so they continue to push sales to this day.

Besides, there are still some big games that had been announced: Breath of the Wild 2, Metroid Prime 4, Bayonetta 3, a Detective Pikachu game, a Paper Mario is coming next month, Pokemon Snap later this year.

And that's just from Nintendo themselves. The recent announcement of EA to bring 7 games to the Switch shows that the success of the Console is too big for the big publishers to ignore anymore and are jumping onboard now one by one to not miss the hype train.

Gamecube had much worse start and struggled in it's second year already. Switch is in it's 4th year and still rising. Your comparison really doesn't match or make sense.

Look at the graph. The strongest sales for the 3DS-WiiU combo are already over. Their sales are already slowing down. So a comeback is unlikely, Switch would've to fall off a cliff. As PS4 and XB1 are already so much more powerful than Switch one would assume Switch sales already slowing down. But they actually increase. Going forward you could assume Nintendo has fired most of their important IPs, so a slow decline is possible, but it seems highly unlikely that Switch will suddenly stop selling. As WiiU+3DS already started slowing down, it should be easy for Switch to stay ahead.

I have sarcasm detectors to sell and it looks like demand for them is sky-high.

You have to be joking hahahaha. The switch is crossing the Wii whether you like it or not. The cliff isn't coming mate

Lol guys don't take it seriously, I was just mocking all the Switch/Nintendo Doomsday predictions. No way the Switch sells anything short of 100M.