Are Compile Heart's sequels still worth playing? Following the utter disappointment of Mary Skelter Nightmares 2, the focus now turns to the Galapagos RPG brand and another promising IP, the first entry of which was rather well appreciated. If nothing else, its sequel, Death end re;Quest 2, is an important step for Compile Heart's portfolio. 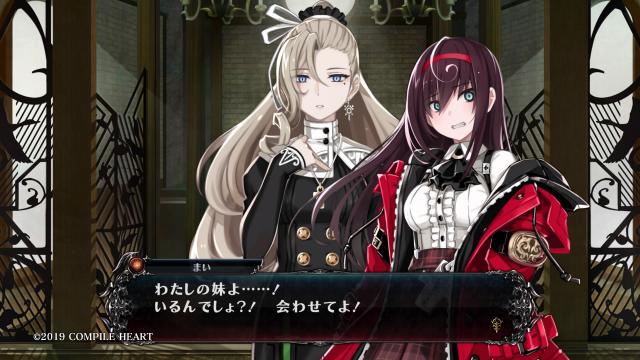 The story of Death end re;Quest 2 revolves around three new characters. Mai, the main heroine, is sent to an orphanage after killing her father, who had been brutally beating her. She soon discovers that the place is fishy; it's forbidden to leave the rooms after midnight and anyone who breaks the rule vanishes in strange circumstances. Mai's sister disappeared from the same orphanage, and now Mai herself decides to slip outside after the fatal hour in order to find out the truth, helped by her new mates Rotte and Liliana.

The progression system in Death end re;Quest 2 is divided between night and day. During daytime, you chat with the various students of the curiously-named orphanage (Wordsworth). You could even say badly named, because the conversations are hardly worth your time. None of these interactions with NPCs actually matter to the story, nor did I really remember any of the secondary characters. They have little personality and no one at Compile Heart even bothered to draw complete 2D models for them (they're just represented by small icons in the dialog box). Humor is almost non-existent too - it made me sincerely miss the first game, which had very cool NPCs. 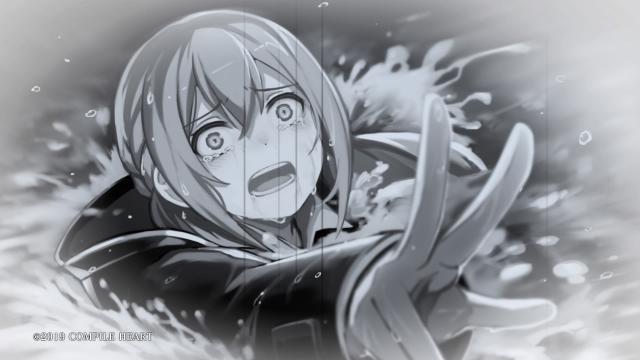 At night, Mai's party leaves the orphanage in order to explore the town of Le Choara. As you can imagine, the situation there is pretty bad, and monsters called Dark Matter roam freely. That's when Death end re;Quest 2 gets more interesting, thanks to the eerie tone of the story written by Makoto Kedôin. Nanameda Kei's design, although less impressive than in the previous game, provides the dark atmosphere that the title needs. Suspense in the storyline is fairly good, partly because the player faces lots of choices, which have various actual consequences on the scenario. NPCs can die if you give the "wrong" answer, and your party can also perish in horrible circumstances in certain story branches.

It's also pretty cool to look for all the possible endings, but I can't help being disappointed by how tame the game over screens are. Horror was defined as the main theme in the original Death end re;Quest, and it was expected that the sequel would be as scary and violent as possible. But, ultimately, Death end re;Quest 2 ends up being milder than the first game, merely touching upon the subject. Without clear depiction of death and suffering, Compile Heart's game is simply not impressive enough as a horror-RPG. Maybe the publisher should have targeted a CERO Z rating in Japan (adult only), rather than CERO D (above 17 years old but no ban on a younger audience), a bit like Nippon Ichi Software when it released Iwai Hime Matsuri, an eerie visual novel full of unbearable scenes and pictures. 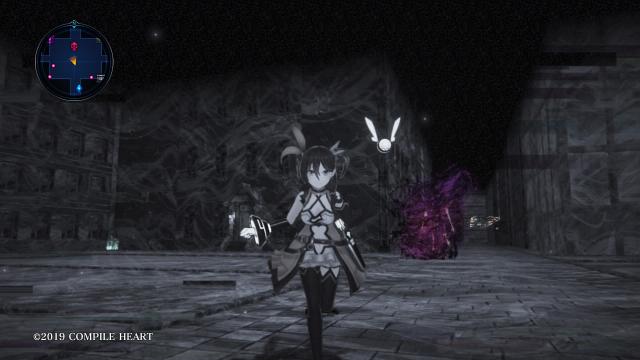 The game attempts to increase tension with an invincible ghost called the Berseker. It can spawn anywhere on the world map and results in an immediate game over if it catches you. Compile Heart fans will probably link that to Mary Skelter Nightmares, but its impact on the gameplay isn't as effective. The Berseker is actually incredibly slow and unless you run into it on purpose it will never catch you. The Nightmares in Mary Skelter Nightmares were fast-paced, much more aggressive, and considerably more stressful. The Berserker can also show up in battles, but you don't have to worry about that much either, since it doesn't move at all. In short, it's the perfect example of a failed gimmick that serves neither the gameplay nor the atmosphere.

The soundtrack was created by Yuki Sugiura, who previously worked on Cyberdimension Neptunia. While the latter turned out to be a complete disaster in terms of gameplay, it wasn't the worst Netpunia game musically speaking. Sugiura does a good job here too, despite Death end re;Quest 2 having a wholly different atmosphere. His chilling melodies fit the desolate town, and the high-paced combat themes aren't bad either. However, the same thing cannot be said about the graphics. Already under average in 2018, the 3D engine used for the original Death end re;Quest is deployed here too and it hasn't aged well. The 3D modeling is very underwhelming, especially following Valnir of the Dragon Star, which was produced by Galapagos RPG itself two years ago; that title boasted much sharper graphics and more appealing animations. 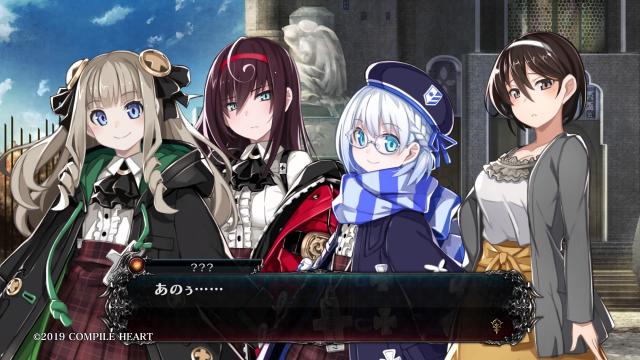 My biggest problem with Death end re;Quest 2 is that it's as bad as Mary Skelter Nightmares 2 as a sequel. Like the latter, you barely feel any connection with the original title. The general subject matter has also totally changed from VR gaming to the paranormal and satanism. The game is shorter and the story isn't as elaborate as Death end re;Quest's, which had a double narrative between real and virtual worlds. The new approach isn't all bad though - the sect that takes over Le Choara is creepy and the writing in some chapters is thrilling, but the narrative as a whole doesn't feel relevant as a sequel.

Another big mistake made by Galapagos RPG here is the monumental waste of characters. Without spoiling anything, I want to point out that while previous characters are available for battle, you rarely see them in the actual story. Their roles are reduced to a bare minimum, which is quite miserable to see, and the logic for it is terrible as well. Death end re;Quest 2 doesn't do a good job with its characters and it might justifiably disappoint or even anger players who enjoyed the first game. 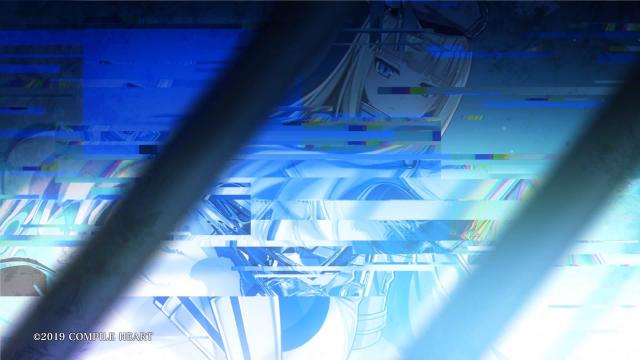 After the end credits, players may be surprised to see a completely different title screen and opening movie. Disappointment was stronger than curiosity in my case, since it simply explains the ending sequence in a second playthrough. Even worse, you need to go through the entire game a second time, and there's only one extra scene per chapter! As it turns out, it provides crucial information that allows you to fully understand the scenario and link the two games together, but that should've been achieved in the first playthrough. Compile Heart should be aware that it's not the only company making video games in the world, and that players might want to spend time playing something else... 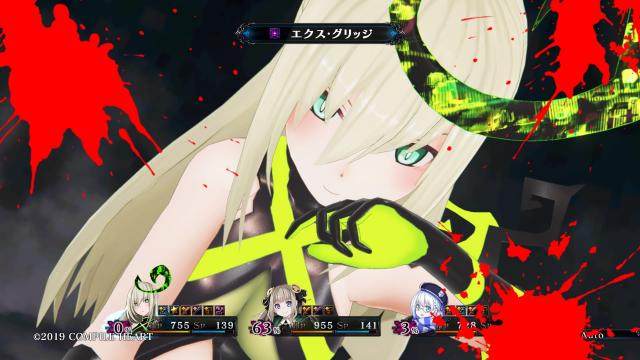 The combat also feels like a giant leap backwards. While Death end re;Quest 2 retains the principle of colored spots on the battle area, the system has lost much of its luster. For the uninitiated, the spots used to cause positive but also negative status effects, while increasing the corruption gauge of the heroines. You could then have them morph into Glitch Style - a sexy transformation that makes characters ten times stronger. In the sequel, however, the spots grant only buffs, so the risk-management that was the whole tactical point of the system in Death end re;Quest is totally gone. You can't renew the spots anymore either, which is annoying in long boss battles. Battles as a whole are shorter, but the battle system has become generic and repetitive. Death end re;Quest 2 also removes the mini-games and the summon beasts.

After Mary Skelter Nightmares 2, Death end re;Quest 2 represents another promising franchise spiralling down the drain at Compile Heart. I felt little ambition, no compelling ideas, and no intention to live up to the legacy of the first game in this sequel. Fans can legitimately start to question Compile Heart's current policy of mass producing Switch ports, when its new games, like this one, lack content and polish. Like Mary Skelter Finale, Death end re;Quest may have a third chance in the near future (the ending clearly suggests as much), but for now Death end re;Quest 2 is a poor sequel in respect of gameplay, graphics, and story.

This review is based on a retail copy of Death end re;Quest 2 for the PS4 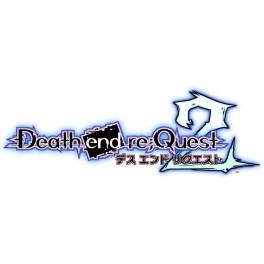