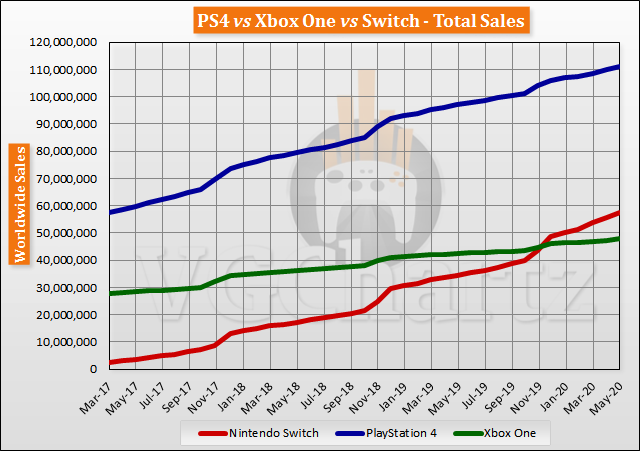 Looking at the total sales of the PlayStation 4, Xbox One, and Switch through May 2020 shows the Nintendo Switch continuing its climb and is nearly 10 million units ahead of the Xbox One after surpassing it in December 2019. The PS4 is currently ahead of the Switch by 53.52 million units, however, that gap has been slowly, but steadily shrinking. 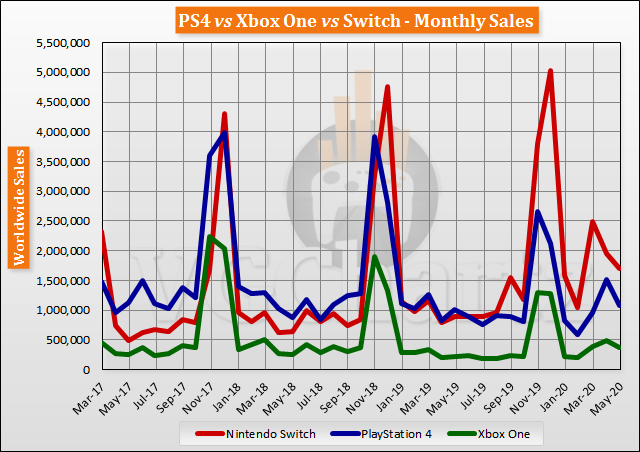 Looking at the marketshare, the Switch managed to achieve 53.9 percent of the monthly sales. The PlayStation 4 accounted for 34.2 percent of the consoles sold, and the Xbox One 11.9 percent.

The Switch is insane , Love this console

It's my first Nintendo console since the N64 and I'm really enjoying it. Mario Odyssey and Pokemon are the main reasons I bought it.

Me too, now if only they could improve their shitty online service switch online, ill be happy

The Switch is Unstoppable.

The Switch is a beast right now.

It is reminding me of the Wii and DS.

Is it fair comparing 8th gen vs a 9th gen?

We've done this every month. With Nintendo being offset by a few years compared to Sony and Microsoft, we are just comparing the three current consoles.

Gen definition is different for everyone. For me the Switch is a 7th gen technically and a 8th gen calendar.

Considering all three products are on the market at the same time, are the main offerings from each of their respective companies, and are at least to a large extent in competition, I'd say it makes sense to compare them.

This should be Switch's peak year.