Mario Kart 8 Deluxe was the best-selling game in Germany in December 2019, according to the German association for video games. The game climbed up three spots from fourth to first.

Minecraft is up from 13th place to sixth place, while Pokemon Sword drops one spot to seventh. The Legend of Zelda: Breath of the Wild after nearly three years on sale re-enters the top 10 in eighth place. 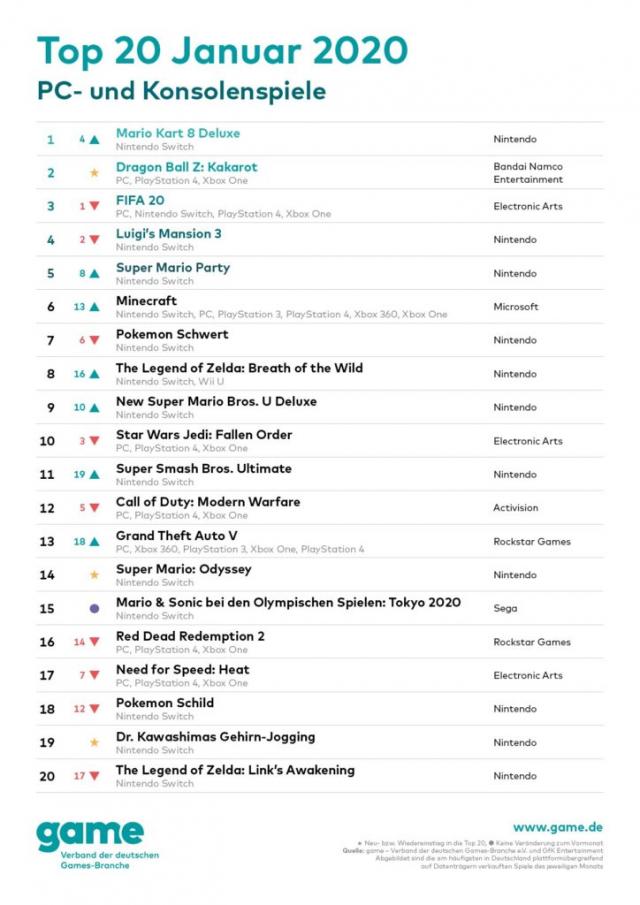 Does not surprise me one bit. In Germany the game is popular for local multiplayer during lunch hour, and it is probably the main seller of the Nintendo Switch, even ahead of Breath of the Wild.

To elaborate a little more with an anecdote:

At my work there was 4 of us that began playing Mario Kart at lunch. Two years later, it was easy to fill up all the slots in a multiplayer match. We have had so many players that often we have two different games going on. Usually it is board games and card games that occupied us at lunch, but Mario Kart is now the champion.

It's quite fun because when you are hooked up online you can fill up remaining slots with online players.

Anyway. There are always people seeing the group play, and they want to join in. That's the main reason why they buy a Switch.

12 out of 20 are Switch exclusives. That's pretty impressive for a PlayStation dominated country and the large PS4 install base. It seems that rather many different games are being bought for PS4 than a few system sellers.

People keep asking if I'm back and I haven't really had an answer, but yeah, I'm thinking I'm back. - Nintendo

The legs of these Switch exclusive titles is insane.