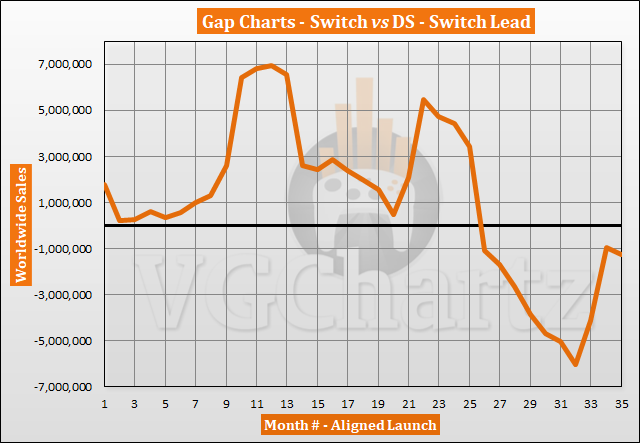 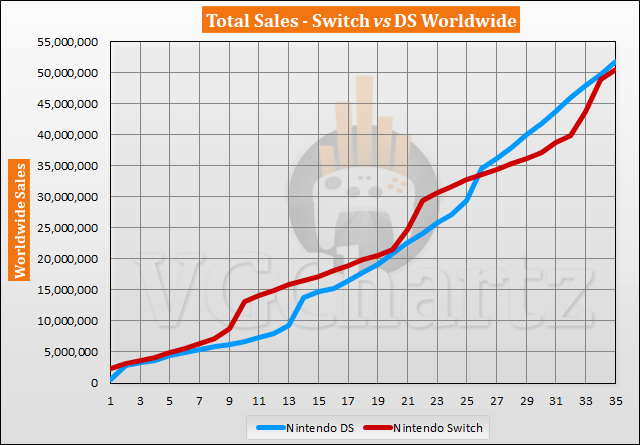 January is the 35th month that the Nintendo Switch has been available for. During the latest month the gap grew in favor of the DS by 297,238 units when compared to the DS during the same timeframe. In the last 12 months the DS has outsold the Switch by 5.96 million units. The DS is ahead of the Switch by 1.25 million units.

The fact the Switch is even keeping so close is impressive as hell, particularly given how much more expensive it is.

It’s time for the DS to say goodbye for good. For the next 15 months or so it will sell more than 40 million units.

DS is selling about 12 million units within the next 3 month (until year end 2007). Next 15 month are ~41 million, next 27 month are ~69 million. Within the next 21 month DS will double its total sales, selling another ~52 Million. We all know how this will end and Switch still is selling pretty good. :-)

Impressive that Switch is still so close, but the momentum of the DS at this point becomes unbeatable.

aaaaah... so close.... but no cross in total sales. Gap curve is within a downward pitchfork which suggests a return to the baseline of approx. -12M.

Wow, that was a lot closer than I expected. I know it probably can't keep this up, but I'm surprised it kept it competitive for this long.