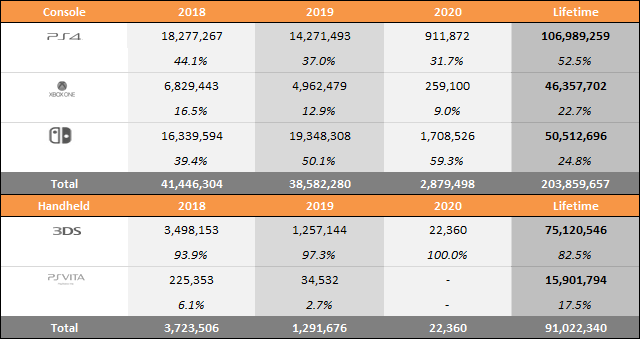 It seems like the Switch still hasn't hit it's peak yet which is amazing for a system that hasn't got a price drop 3 years in, sales are still up 23% from last year despite an extremely dry 1st half it's been for 2020 so far, I'm sure animal Crossing is gonna be huge for the Switch and push it further into more momentum.

The fact it didn't receive a pricecut yet is a huge factor on why it didn't peak.

Looking at how PS4's 2018 was beating PS4's 2017 YoY sales and now Switch's 2020 is beating Switch's 2019 by almost the same difference makes me wonder.
Will Switch actually peak with only Animal crossing as its main selling game?

The Switch will likely stay ahead in 2020 compared to 2019 through the first half of the year. It is the second half, especially the holiday, that will be trickier. In order for all of 2020 to beat 2019 Nintendo needs to release a game as big as Pokemon and / or drop the price of the Switch. Say Switch Lite to $179 and regular Switch to $249.

You have a very good point, but i feel a price cut is very unlikely as they are selling extremely well and the recent comments from Nintendo suggest that they want to keep it at full price as much as possible.

It's doubtful that Animal Crossing is the only big game they have planned. 2018's biggest game was Super Smash Bros, and we learned of that game around 7 months before it launched I believe. I think it's highly likely they will announce another major title for the holidays, every single year for the Switch they have so I don't see why 2020 would be any different.

So... are you assuming they won't release any major games between March and December?

There's literally no way Nintendo won't release a big game this holiday season, they definitely got more games up their sleeve this year they haven't announced yet. Their next direct for sure will confirm the games coming for 2020.