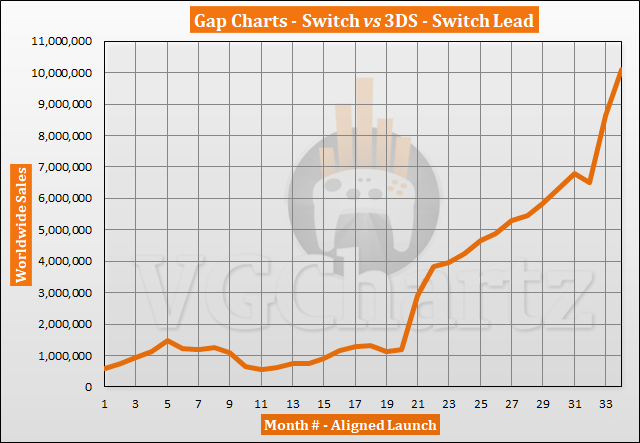 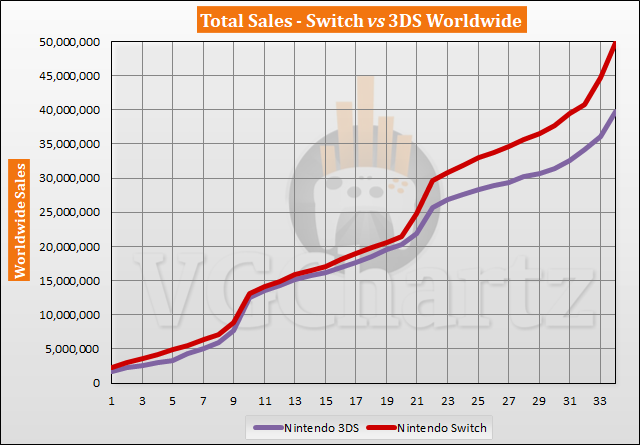 The 3DS launched in February 2011 (however, 3DS sales have been aligned to March 2011, since it only launched at the end of February in Japan), while the Nintendo Switch launched worldwide in March 2017. The Switch has sold 49.81 million units, while the 3DS sold 39.71 million units during the same timeframe.

So far it's not even that bad, but from now it's gonna be a massacre.
3DS dropped like a roch in his 4th year, while for Switch the 4th year is gonna be his peak.

3DS shipped 7.67 million in 2014, Switch will almost triple those numbers.

Switch is running away with the lead.

I'd love to see one of these comparing switch and ps4 launch aligned worldwide.

That is one of the monthly Gap Charts. Posting 1 per day it takes a little bit to get through them all.

Here's the most recent post of Switch vs PS4.

Thanks, don't know how I've been missing it haha

Wow, Switch should also be ahead of 3DS + Wii U combined. What a success for Nintendo. Congrats!

I am still not convinced that Switch can sell more than the 3DS lifetime. The 3DS had tons of great Atlus RPGs, but Switch has none through three years. Nintendo cannot sustain Switch sales with first party games alone.

Damn it Rol. You're making it hard for me not to respond. Your troll game is too strong

Gotta stay off that crack man

I only know this is sarcasm, because I know your actual views. There are others who say even more ridiculous stuff than this and are serious.
https://en.wikipedia.org/wiki/Poe%27s_law

Yes i'm also not convinced the Switch can surpass the 3DS lifetime sales by the end of this year. Next year yes but not this one