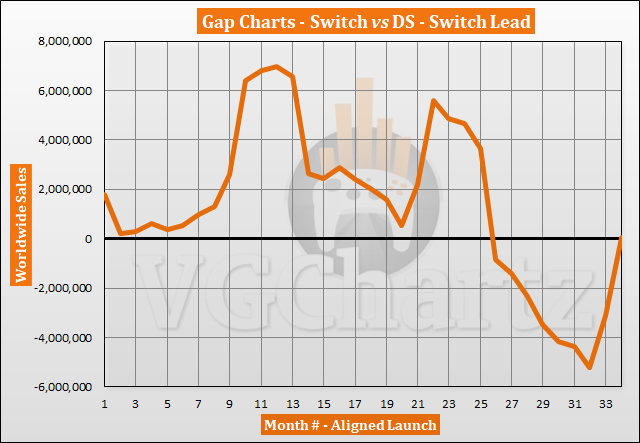 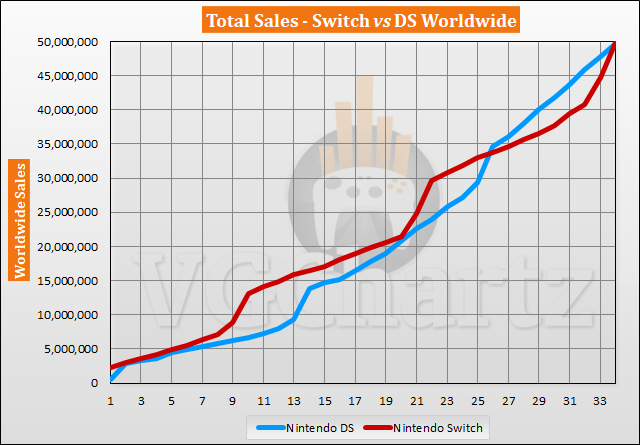 December 2019 is the 34th month that the Nintendo Switch has been available for. During the latest month the gap grew in favor of the Switch by 3.15 million units when compared to the DS during the same timeframe. In the last 12 months the DS has outsold the Switch by 5.55 million units. The Switch was able to take a slight lead of 51,435 units over the DS.

Switch actually managed to get a tiny last lead before falling back for good now.

Will do you think you can add a chart to these articles that has the older platform's line going into the "future"? Would make it easier to see what the newer has to face! Thanks!

Agreed! at least a quarter or two of lead out would be awesome.

A round of applause to the Switch for fighting this long, but now, it's over.

People kept telling me for months that there was no way that the Switch would catch the DS during these holidays, and yet there it is. It's true that it won't keep the lead for long, but Switch is actually selling better than a lot of people thought it would, even just a few months ago.

Q3 for Switch might have been under tracked, the regular Switch was sold out in many places in UK lately. Maybe the lead i actually a few hundred thousands instead of 51.000 but the fight is over anyway.

Wow, I did not expect another cross... uh, touch... whatever.

Switch is about to go into an extended rest mode against the DS and then will gain again to catch up to the DS eventually.