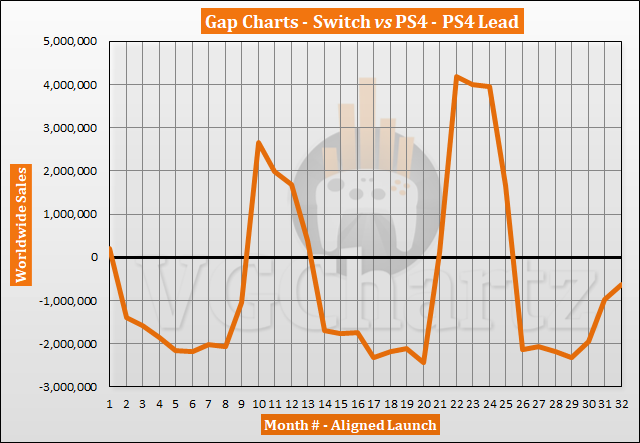 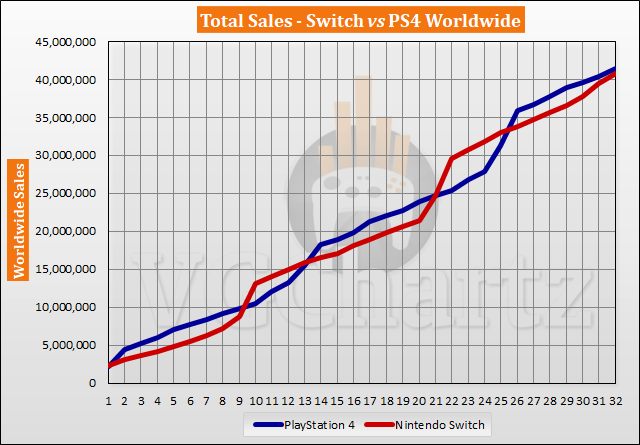 PS4 only has a 640k lead and we haven't even entered Nov-Dec yet. You can also compare month 32 and month 20 (12 months prior) to see that Switch is competing a lot better against the PS4 vs. the same time last year. There is a decent possibility that red Switch curve will cross above the blue PS4 curve and then they never cross back. Switch is in a very good position to take a permanent lead.

If Switch keeps up this uptick in momentum in the new year, then it may have built a lead as PS4 reaches it#s next holiday, so Switch stays atop. May be close though. We'll see.

I definitely think it will be close during the next several months, whether Switch takes a permanent lead or not. It basically needs to make it past month 38, which I believe is December for the PS4.

I can't really see the switch maintaining the lead permanently. Pokemon and Animal crossing will definitely keep it ahead for the next year, but I can't see the Switch being supported for as long as the PS4 was, in the wake of a new gen of consoles coming out.

Long term is a different question. I can see it as possible that Switch sprints ahead for now. Long term development depends on how the Switch stays afloat, once the next generation of competitors consoles are out (PS5 and Scarlett). So the interesting thing will be how momentum develops 2021. So far Switch is the home console experience on the go. With the new gen the understanding of home console experience may evolve. That may affect the sales, but Nintendo could reposition the Switch (which possibly already happened with the Lite), as a mobile console and the second half of it's life Switch follows the 3DS. If that transition happens, I can see Switch outselling Wii and PS4.

Mnementh, what you say doesn't make sense. The current understanding of Switch is definitely not "home console experience on the go" relative to PS and Xbox consoles, simply because there are far too many PS and Xbox AAA third party games that aren't available on Switch. But you say it as if Switch is seen as the PS and Xbox experience on the go and then proceed to be concerned about the influence that the PS5 and Scarlett can have. But those consoles aren't going to make a difference. The vast majority of the important PS and Xbox games won't be on Switch, so it's the same situation as it already is and has been since Switch's launch.

It's not the third party support that will determine how far Switch can go, because there won't be any dramatic changes in the next several years. AAA games won't come, Japanese support will remain strong because the PS5 won't be able to make any convincing arguments to the contrary, indies will stay on board because their games have routinely sold much better on Switch than on other consoles.

The key is how long Nintendo will stick with Switch. If they go stupid and rush out a new console, then that's just about the only way how Switch can end up selling less than the PS4 lifetime. There's no need to rush because Switch's value proposition isn't going to be challenged. Said value proposition isn't "home console experience on the go", it's "you only need one convenient device to play your games anytime, anywhere."

Given how many games are made for Switch, including plenty of quality titles on all levels, people should take a look at the PS4 vs. DS gap chart to get a glimpse of Switch's longevity. Way too many people buy into the simple-minded thinking that Switch can't have the longevity of the PS4 because it's a Nintendo console, but if people actually looked at the health of the software pipeline and knew what it did for the DS, then their conclusions would be very different.

Now it will be really interesting if after it's next holiday season the PS4 will be able to regain the lead or not. Really a close duel so far.

I am sorry I see 2 Christmas boost for the PS4 on this graph, not 3.

Funny cause I see 3 @Amnesia

Actually the Wii is the fastest selling game system in history until month 65. In month 32 the Wii has sold about 50M units, while the PS4 has sold about 42M.

This is neck and neck and let's face it, the Switch will power into the lead in the next couple of months. I do however doubt it can hold that lead long term. The PS4 has such long legs and still sells well to this day it will be hard to beat...

True, but once the PS5 and Xbox 2 come out Switch will by far be the cheaper option making it easy for people to purchase one as an impulse buy