Luigi certainly has come a long way. From a simple green colored palette swap of Mario, to having an entire year dedicated to him, and now carrying Nintendo’s holiday releases along with Pokemon. After spending years in Mario’s shadow, Luigi makes his return to the spotlight in Luigi’s Mansion 3. How does his latest ghostbusting adventure fare? 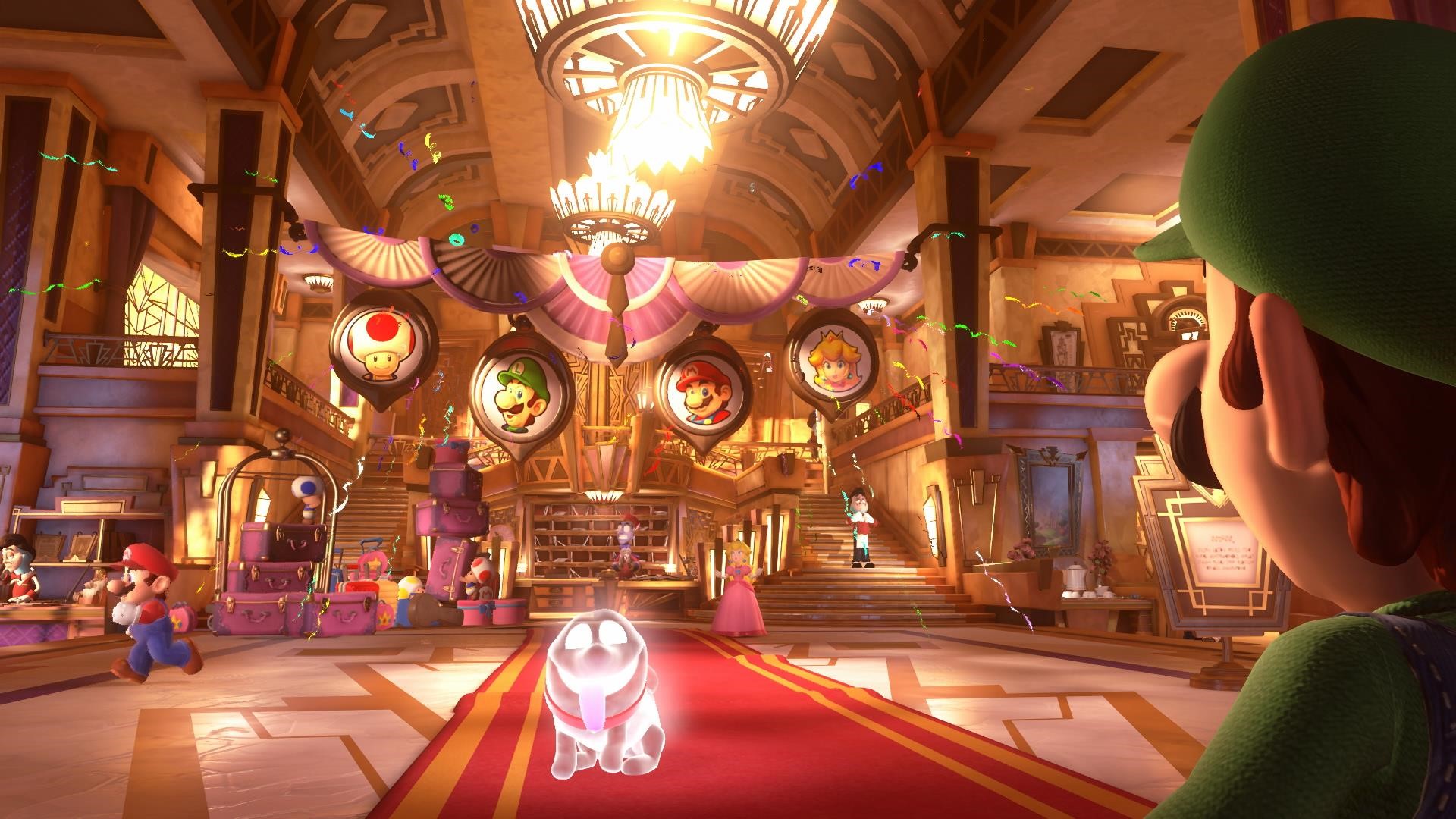 Luigi’s Mansion 3 sees Mario, Peach, Luigi, and an assortment of randomly colored Toads being invited to stay at a random hotel. Unsurprisingly, the invitation turns out to be a trap, and everyone but Luigi is captured and turned into a painting. Luigi then has to team up with Professor Egad to ascend the various floors of the hotel and rescue his friends along the way. The set-up is a little too similar to the first game’s for my liking. While the story in pretty much any non RPG Mario has never been particularly important, the original game was afforded an air of creepiness and almost mystique by its atmosphere and having Mario, the person usually responsible for the rescuing, needing to be bailed out himself. Essentially repeating the first game’s set-up, but with more characters and a bigger building, feels like it’s giving up on the atmosphere component that really boosted the Gamecube title and helped elevate it as a whole past some of its gameplay limitations.

For what it’s worth, this is a gorgeous looking game, and by far the prettiest visit to the Mushroom Kingdom (if that’s even where this takes place) to-date. Some of the different floors in the hotel are really visually appealing, and there’s no doubt that considerable effort was put into making this an aesthetically pleasing experience. The soundtrack is pretty solid too, with tracks that fit the themes of the individual floors quite well. That being said, I do feel that both the art direction and the soundtrack might have drifted towards being a bit too cartoonish. The Luigi’s Mansion games have never been scary, but the atmosphere has always been at least a little (and sometimes much more than that) unnerving from time to time, while Luigi’s Mansion 3 doesn’t seem to make any attempt to be remotely off putting in that respect up until the very last floor of the hotel. 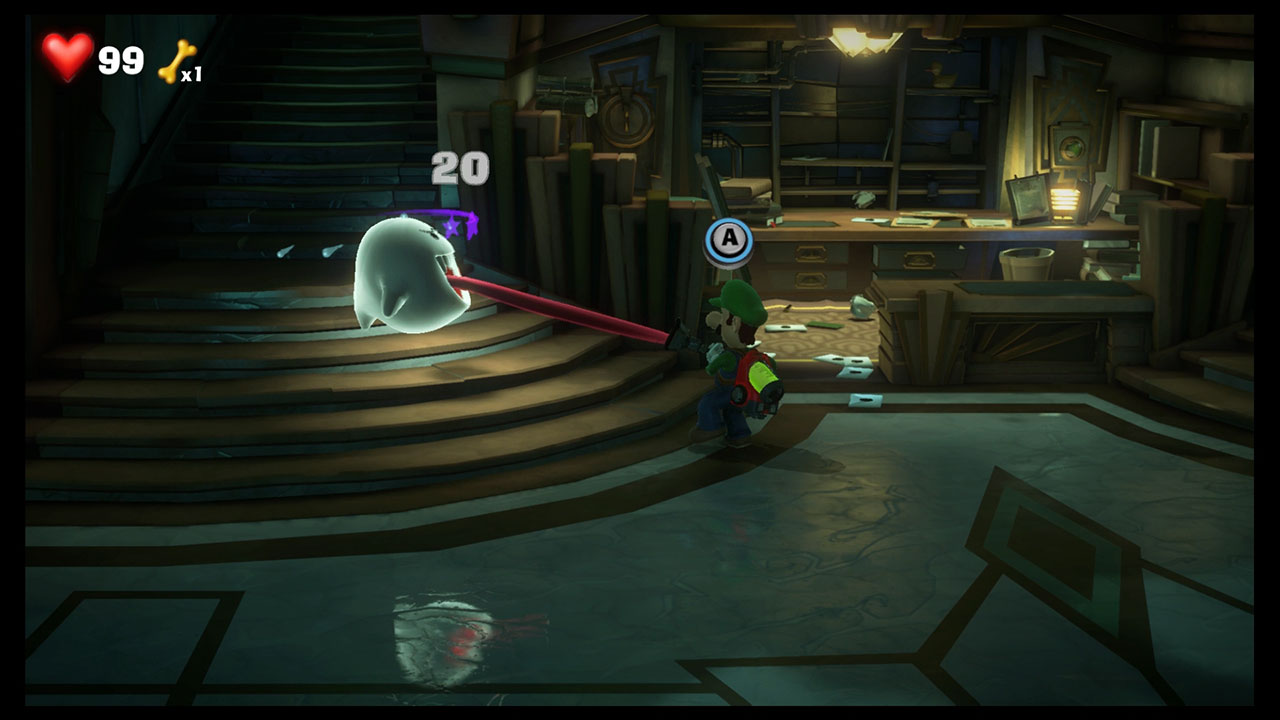 Perhaps the biggest departure from the original Luigi’s Mansion - and Dark Moon to a slightly lesser extent - is that Luigi Mansion 3 has a much greater emphasis on puzzles. Each of the various floors that Luigi must travel through is filled with various challenges requiring the player to make use of interactable parts of the environment to proceed. These types of puzzles were present in the original two titles to some extent, but they’re vastly more common place here, to the point that I would consider puzzle solving as central a mechanic to the game as the actual ghost catching.

Some of the puzzles are quite clever and well thought out, but they're in the minority compared to the ones that basically require the player to just suck, light up, and shoot a plunger at everything in the room until they find the one thing that allows them to progress. In fairness to 3, the Luigi’s Mansion games have always incorporated this method of interacting with the environment to progress, but it’s far more prevalent in this game and just feels like it’s grinding the pace to a halt every few steps. Perhaps that’s due to the sheer amount of tools at your disposal now; between returning options like the poltergust, the flashlight, the darklight, and the plunger, and new abilities such as a shockwave/jump move and Gooigi (more on him later), there are far more options to run down for any given area.

I suspect that the greater emphasis on puzzle solving comes from a desire to make the game longer, as past Luigi’s Mansion titles have generally been relatively short. And, to be fair, Luigi’s Mansion 3 will likely have the longest first playthrough in the series for most players (with my first run clocking in at around ten hours). But there are no points to be awarded for that if the game’s method of extending its run time is to basically throw a barrier in front of the player every few steps and prevent them from proceeding until they’ve scoured every portion of the room, or, at least, enough of the room until the game decides to tell the player the solution.

The game does this with more than just puzzles, often finding other, less than creative ways to make playtimes longer. At one point, the player is just about to make use of a newly acquired item necessary to proceed to the next floor, only to have it stolen by a ghost cat that runs away to a previously visited floor. The player then has to trek back through that older floor and fight that cat three times over in battles that don’t change at all from one to the next before getting the button back and being able to proceed as they were originally going to. This is just pure filler, and so of course the game repeats the exact same thing later on, because if it was annoying once then just maybe repeating it will somehow cause it to come around and suddenly be fun.

The biggest addition to the gameplay is Gooigi, which essentially functions as an additional controllable Luigi, with the added bonus of being able to squeeze through tight spaces and ignore damage from spikes. As you can probably guess by this point, his function is mostly used for puzzle solving, being used to pull levers or blow switches that regular Luigi can’t access, although there are a few enemies and even bosses that require making use of multiple Luigis. It’s not a bad mechanic by any stretch of the imagination, but I came away from Luigi's Mansion 3 not really feeling like it had elevated the game in any way; rather it just mostly gave the devs an excuse to block off some areas from normal Luigi so Gooigi has to be used to progress. For what it’s worth, Gooigi is plenty charming, and he certainly doesn’t hurt the gameplay, but he rarely gets to shine. There’s an extremely well done boss fight close to the end of the game that forces the player to switch back and forth between Luigi and Gooigi consistently, and it’s a shame he’s never really utilized quite that well anywhere else.

Thankfully, the ghost catching is actually still fun, for the most part. Many of the individual fights have more creativity put into their designs, and using the various tools at your disposal to disarm a ghost and then suck it up feels great. Slamming ghosts into the ground, or other ghosts, also feels really good as well. And after Dark Moon and the original game’s remake on the 3DS, it’s extremely nice to have a second joystick for aiming, rather than relying purely on gyro aiming or the New 3DS’s nub.

Having said that, there are some frankly bizarre design choices that make this game far more annoying to control than any first party published game should be. Like previous titles in the series, the game operates with fixed camera angles, which would generally be fine, but the turning controls are now locked to Luigi’s position, meaning that, if Luigi is facing forward and you want to turn left, you move the stick to the left, but if Luigi is facing backwards and you want to turn him to your left, you turn the stick to the right (thankfully there are some customizable control scheme options for once, so this can be changed with some fiddling in the menu). It’s also weird, for instance, that the gyro can be used to aim up and down, but not side to side, and equally weird that there’s no way to change that. And finally, the reticule used for aiming disappears when you're not currently aiming at something you can hit, meaning that if you're not currently aiming over a target, you just have to guess how far you need to move your cursor to target something. This isn't too big of a deal normally, but it can be frustrating during the myriad of boss battles that require you to quickly aim and target an enemy.

Despite the harsh reaction, I don’t hate Luigi’s Mansion 3, but it is massively disappointing. The spark and creativity that made the original Gamecube title something of a cult classic is here somewhere, but it has been buried underneath an increasingly large pile of gameplay annoyances and mechanics that add options without depth. What was original and interesting has stopped being engaging, while the annoyances of the series have only made themselves more and more prevalent as Nintendo refuses to address them. If this series continues, I really hope Nintendo takes the time to iron out some of the rougher spots, rather than finding another flashlight or something to throw in Luigi’s arsenal.

I actually agree with this review. The backtracking mission with the cat almost made me rage quit and the game just kinda feels clunky. I've reached the 10th floor and I'm not sure if I want to finish the game.

The repeated use of "luigi reaches for the elevator switch. OOps a ghost gets it" is very tiring.

So VGchartz is becoming slant magazine

Or at least IGN.

This review is bull. Luigi's Mansion deserves much more than a 6.

They basically made the game a checklist game. Reach a point, and then you bust out your list.
Did I suck it? Did I blow it? Did I flash it? Did I negative Light it? What about the weird vacuum jump? Do I need my clone?
Oh maybe try the plunger a couple of times just incase I missed the first times. Along with the oddly specific "did I shoot Toad at the wall or have him collect something for me"?

There is little thought put into solving the puzzle. You just go down a list until you find the right item.

Specially in the beginning when you don't have all the stuff. You look at the gem in the dryer going WTF am I doing wrong. With the answer being - you don't have the plunger yet.

And the boss fights are too elaborate. Wait until it charges you and flash at the last moment. Now take his shield. Now flash him. Now suck him. It isn't hard - it is tedious and annoying to figure out.

The other two games before this were the same.

Agree. In many ways it’s a great game but there’s a lot of padding and some irritating elements to the gameplay. I’m up to the 12th floor and struggling even though it’s seems I’m near the end..., not cos it’s hard,cos, it’s cos I find it tedious and can only play it in short bursts before something annoys me.