Atelier Ryza: Ever Darkness and the Secret Hideout (PS4) - Review

After two installments in the Atelier series already released in the first half of 2019, few would have bet on a third one this fall. Still, the hard-working developers at Gust have managed to deliver on time, leading to great success in Japan. Bolstered by the enthusiasm surrounding the developer's new illustrator, Toridamono, the development team has implemented many changes and innovative features for the latest entry in this unique RPG series which mixes battle and alchemy. 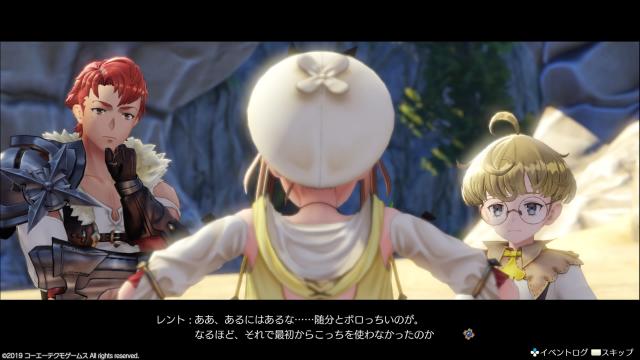 The prologue in Atelier Ryza displays a very bucolic universe. Ryza, Tao, and Lent are three teenagers with only one dream - to escape their boring everyday lives and explore the world beyond the lake in front of them. The three of them live on the island of Kuuken, a cloistered community that fears the outside world. One day, when they leave the island in secret, they quickly run into danger but end up being saved by a wandering alchemist called Empel. Viewing alchemy as a way to a new life, Ryza begs Empel to take her on as an apprentice.

Atelier connoisseurs will probably link that to Atelier Firis, but the comparisons end there. While Atelier Firis didn't push ahead with the narrative in order to focus on open world gameplay, Atelier Ryza hangs onto its island drama for hours, in an arguably overlong prologue. You'll spend at least 15 hours watching family arguments and childish squabbles between Ryza, her friends, their families, and the townspeople. I've been used to lighthearted narratives within the series, but this time it really felt like a bland evening drama. A lot of conversations aren't even dubbed in Japanese. 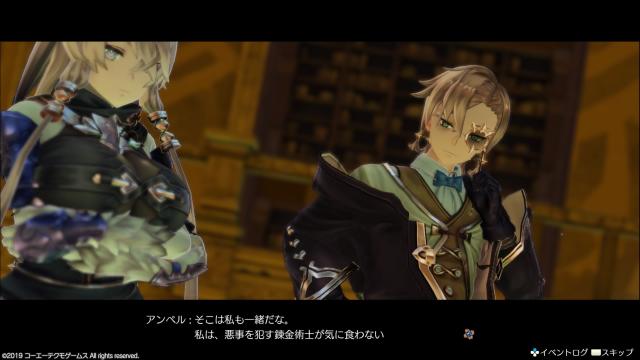 Luckily, the story takes on a new dimension in the second part of the game, which deals with more interesting subjects like the dark side of alchemy, in similar way as Atelier Ayesha did before it. While not being surprising, the scenario does adopt a more mature tone, with philosophical or ecological accents. That's also when Empel and his sidekick Lyla join the team, allowing the player to get rid of Tao and Lent, who are among the shallowest characters in the series' recent history. The game only features six playable characters, and there's no great wealth in terms of relationships or backstories. Much to my surprise the humoristic side of the series is completely gone as well.

I understand that the game wants to focus on the seriousness of the events that surround Ryza's world and its history, but comedy has always been a strong point in Atelier, so something feels missing here. Other traditions have been dropped in this entry as well; there's no alternative ending, and illustrations are astonishingly scarce. In short, the development team hasn't performed a miracle; Atelier Ryza comes only six months after the previous main game in the series, and it shows, with the content feeling much lighter than usual. 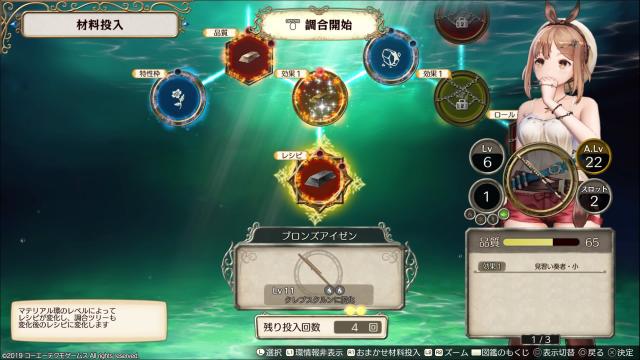 But Atelier Ryza is compelling in terms of gameplay. The alchemy system has been completely renewed to give players a fresh experience. Materials are poured into a sort of course, composed of lines and squares (small or large depending on the level of the item you want to make). Every square needs one type of material to be activated. While two or three lit squares are enough to make an item, the more squares you fill the better the quality of your output will be. Furthermore, each square has additional effects that greatly enhance your creations and will boost quality level, change the item type, improve character statistics, grant passive skills, and so on. It is a vast, engaging, and nearly inexhaustible system given the dozens of alchemy creations included and the meticulous optimization for each one of them.

Courses also contain other recipes, and a few others are found in books scattered about the island. However, most recipes are found while making other items, so there's a sense of exploring within the alchemy system in order to progress, which ends up being a lot more entertaining than just getting recipes from books. 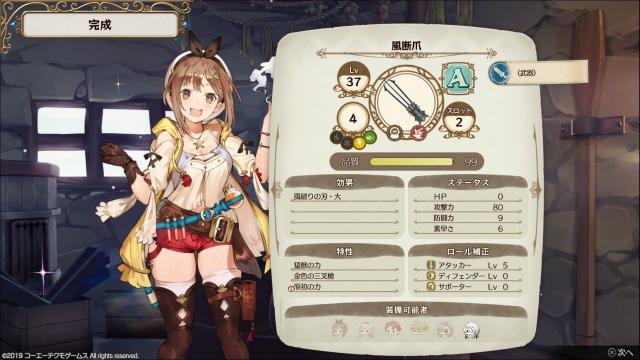 On the top of revamping alchemy, Atelier Ryza introduces two great features: gems and Item Rebuild. Any item can be turned into a certain quantity of gems, which are later used to improve finished alchemical objects. The point of this innovation lies in that you can resume making an already finished object or piece of equipment and work on it until it's absolutely perfect. You resume the course where you left it and fill the remaining square, in exchange for gems (but you need enormous quantities of gems). Gems allow you to get rid of old and low quality items in your storage, creating a virtuous circle in terms of item management.

This has a massive impact on gear management, since Item Rebuild can easily upgrade weapons or armor from level 30 to level 50, for example. Players will have to hunt rare passive skills like jiyu no tamashii, which boosts healing and evasion. As has always been the case in the series, materials can bear rare traits holding powerful properties or passive skills, which can be transferred to alchemy items, including gear, later. When you assign an ingredient in a recipe, the item you make at the end can inherit the traits from the material and become more effective. Rare traits are found in the later stages of the adventure and Item Rebuild makes it easier to replace former traits or skills with more recent and effective ones. Traits are now ranked by rarity, which helps a lot when optimizing your gear. This allows the player to save a lot of time and tackle difficult challenges with better equipment.

Item Rebuild comes in particularly handy when refining armor and accessories, because stats-based properties now have a level. HP++ can for example go up to level 99, which boosts HP quite significantly. If a piece of armor already has HP++ level 10 and you rework it with material bearing HP++ level 6, the output will have HP++ level 16. That holds true for all statistics. By taking advantage of the vast array of recipes, you can build very high level gear quite quickly and be strong enough to keep up with the challenges. 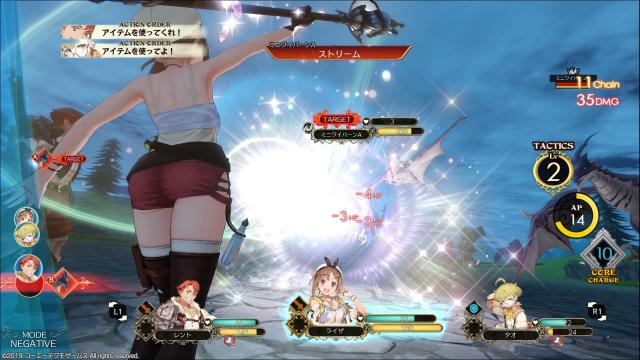 In battles, Atelier Ryza innovates as well, and even introduces the biggest changes since the series has been available in the West. It's no longer a turn-based system; battles happen in real time, as time no longer stops when you choose your actions. Consequently, the player controls only one character, while the other two become AI allies. You can nevertheless change the leader anytime, which is very welcome. The battle menu has attack, skills, and item commands. Surprisingly enough, "attack" is the most important because hitting the attack button now triggers entire combos. Here, Gust inserts a new feature called "Tactics". The higher your Tactics level, the longer the combo will be when pushing the circle button. On top of that the available number of Action Points (AP) rises with your Tactics level. AP allows you to use attack skill, so reaching a high Tactics level is extremely beneficial. Tactics goes up automatically when you attack.

You have to wisely manage your strategy and the number of AP, since they're reset when your Tactics level goes up. For example, there's a maximum of 20 AP available in Tactics two. But once you hit Tactics level three, your AP stock goes back to zero in exchange for longer combos and a new maximum of 30 AP. You then just have to attack again to restock AP. You should always aim for maximum Tactics but you must also assess the right time to upgrade the Tactics level so as to avoid lacking AP when it's needed. Allies will often ask you to perform precise moves like using an item, an ice attack, healing, etc. Each time your character meets their demands, they'll perform an additional attack. 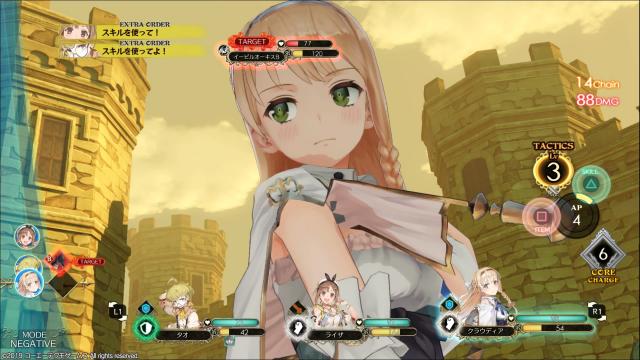 In virtually every battle, enemies charge a lethal blow that can one-hit KO your party. In such cases the R2 button allows you to call your allies to use their most powerful support skills in order to interrupt the foe. This has a huge AP cost and that's why careful planning of battles is necessary. All of this happens very quickly; you have only a few seconds to take decisions like which item to use, who to heal first, and so on. It's a giant leap forward in terms of dynamism, without hurting the strategic aspect of battles. The camera is more dynamic too, following the flow of action better by zooming from time to time. 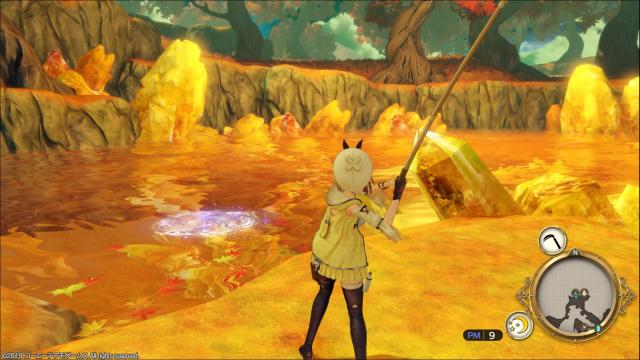 The last important new aspect is Atelier Ryza's world. Here, again, the inspiration taken from Atelier Firis is obvious, but Atelier Ryza doesn't quite live up to its predecessor. The maps are larger than the ones in recent entries, but they definitely can't rival Firis's immense universe. But the bigger disappointment about Ryza's world is that it's not 'open' at all. Maps have to be explored in a set order (if you try a different exit, Ryza politely reminds you that "it's not that way"). In the end, the whole game is set along a fairly linear path, with next to no side events to unwind.

The interesting part about exploration is that you now bring with you several different tools to scavenge materials, with different tools having different uses. Among others, the hammer can extract sap from plants, the billhook cuts little vegetables or flowers, and the axe blows off the ore (surprisingly enough, axes do smash rocks). Those tools, like everything in Atelier, must be manufactured from scratch and their effectiveness highly depends on your alchemic skills. As always, the game rewards the smartest and most diligent players. 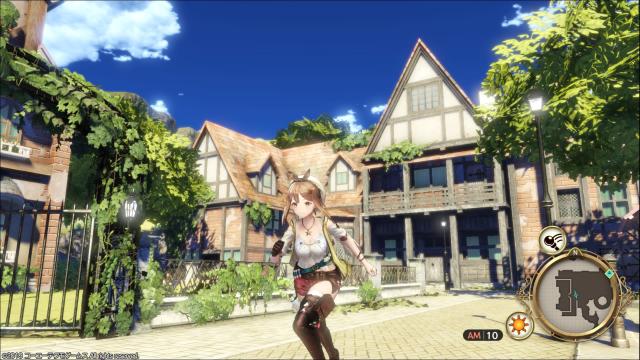 Exploration then only lies in the discoveries you can make along the way, such as when you come across beautiful natural sceneries or ancient monuments. Although certainly good to look at, Atelier Ryza's environments are nonetheless quite barren; ever identical creatures lurk around and there are only three major bosses in the whole game. That includes the final boss, and the first two are actually the exact same type of dragon, which is a letdown. Visually speaking, Atelier Ryza displays textures of far higher quality than two or three years ago. There's visible progress in things like buildings and greenery, but some characters like Klaudia show disappointing 3D models, suggesting the game hasn't been fully optimized for PS4. Battles, however, look stunning and are now among the most spectacular in the genre.

With its delightful novelties and visual improvements, Atelier Ryza would have been a must-have if only Gust had put more effort into its characters, story, and building a more interesting world in general. Alchemy is worth hours of joyful thinking and battles feel more exhilarating than ever before, but KoeiTecmo's game falls short in terms of overall content. The writing is once again underwhelming and the adventure itself holds too few surprises to amaze. Atelier simply needs longer development time if the developers intend to live up to the series' PS3 era.

Review based on a Japanese digital PS4 version of the game. 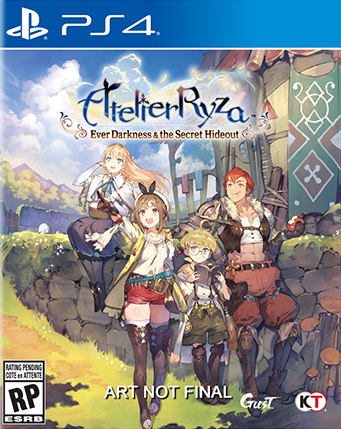 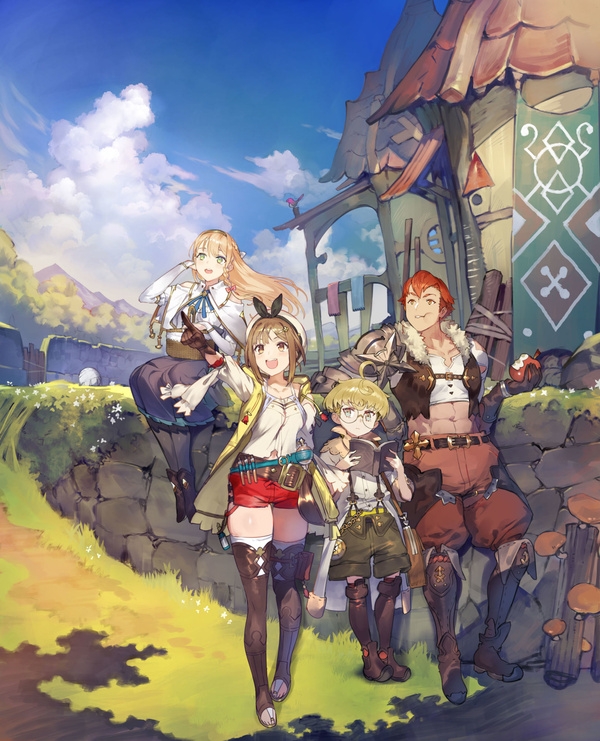