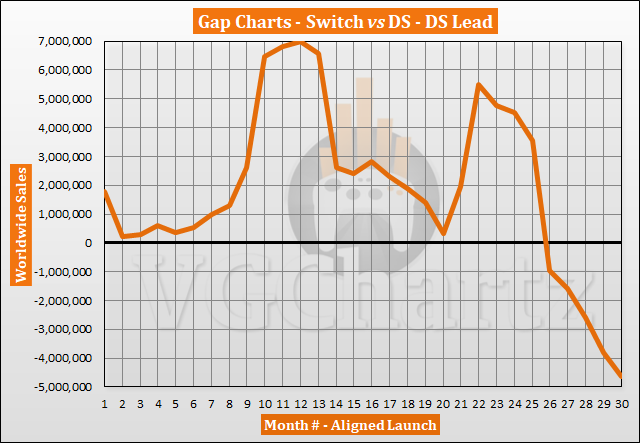 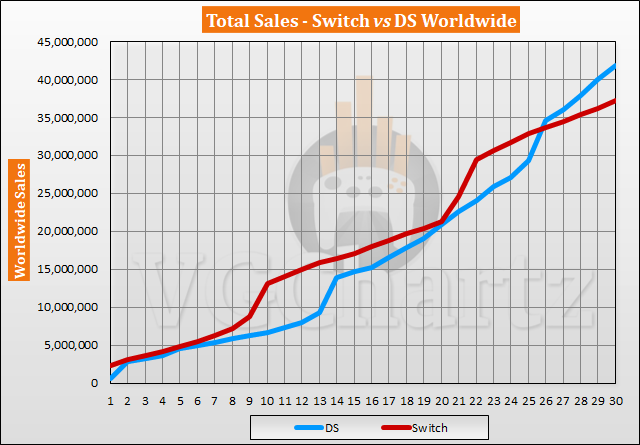 August 2019 is the 30th month that the Nintendo Switch has been available for. During the latest month the gap grew in favor of the DS by 822,486 units when compared to the Switch during the same timeframe. In the last 12 months the DS has outsold the Switch by 6.53 million units. The DS leads by 4.65 million units.

There's still a small possibility that we see a cross in month 34.

I know the switch probably wont close the gap but, I think it will hold it down and keep it a little interesting. I think 20 million shipped this year is a bet I'm willing to take. Maybe more. The switch mini and the revision will carry it to high numbers. When I look at the charts, I find it weird that the refreshed model had nearly a zero % affect in any region aside Japan.

I also wonder, what is making the ps4 suddenly sell 90k+ in Europe? I'm not trying to make anyone angry here, it's a genuine question.

In short, switch looks very under tracked in all regions, aside from Japan. So,anyone know why the ps4 has suddenly been selling almost 100k per week, in Europe when its dropping everywhere else? Sorry for the long, poorly written post. I really am just curious.

Yes.... I know Europe is Sony land. Also, sorry for asking this in an inappropriate place, considering the subject material. If this doesnt belong here, I'm 100% ok with it being deleted.

Sorry everyone, I had this wall broke down into paragraphs, but it wont display them that way from my phone.... I may be an idiot, but I can do paragraphs, Haha.... just not on this website I guess.

I would assume that it’s the holiday season starting, September is usually when the big third party games start releasing like FIFA and Borderlands etc, BL3 came out the day before the chart estimates for the week ending sept 14. I wouldn’t have any answers on why everywhere else has dropped.

This super fury mode of the DS will last until which period ?

Sorry amne....I just realized what you mean. Haha, I believe you mean, when will the ds super... whatever you called it, will last. Haha, sorry man. I do know the ds sold like a rocket for a long time. But I'm curious too.