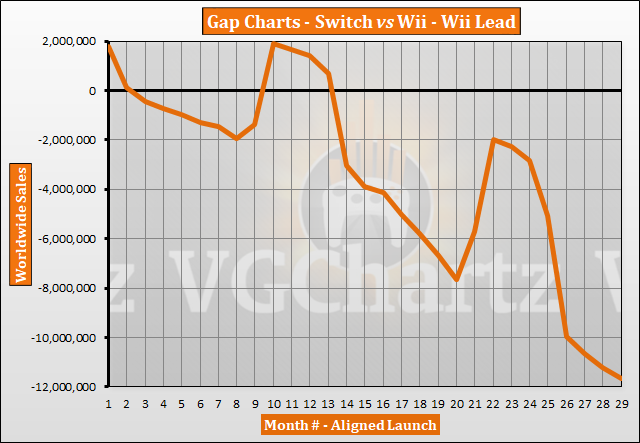 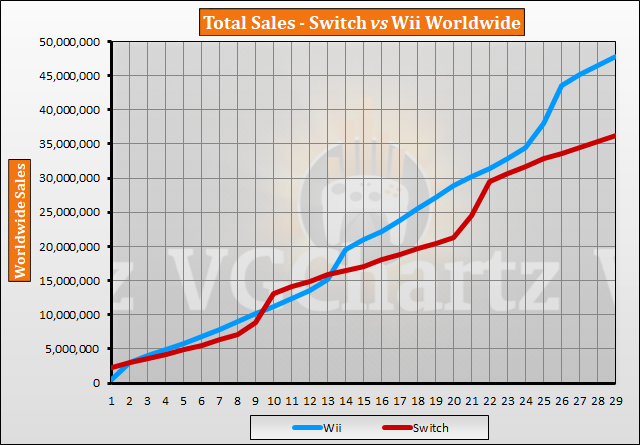 The Wii is still eating the Switch, but a bit slower and slower.

Oh, oh, the momentum looks so strong for Wii. No console can compete with this momentum. But we all know Wii burned bright, but also burned fast. The question is if Switch can live longer and eventually close that gap again. I think it might be possible, but we probably will not know for some time.

I'm very sure Switch will have much longer legs than the Wii did. I mean, the Switch still didn't have a pricecut, is still selling very strongly and will get an updated and a lite version shortly. The Wii meanwhile had 3 truly superb years, one great year after those and tanked after that one. Unless Switch sales start to visibly go down next year, Switch will stop loosing ground next year and start catching up by it's holiday season.

With the new models coming in August and September, looking at the sales curve might get very interesting this fall and compare to last year, to see if they had some effect on the sales, and how much of it.

It really depends on how long Nintendo keeps the Switch around. Generally, Nintendo has been sticking to a 5 - 6 year lifecycle for their devices, which means the Switch will need a guaranteed 6-year life cycle (2023) for it to have a chance of catch the Wii based on current sales.

The problem is the Switch is the Wii U successor and unofficial successor of the 3DS, and so Nintendo will likely be looking at releasing a successor to the Switch as soon as the hardware is available and at an affordable enough price.

If they stay with NVIDIA then a "custom" (aka underclocked) Xavier (30w) / Orin (likely 30w) / of 7nm 2021 chip is probably their best bet. Underclocked Xaiver would be almost on par with a base Xbox One, underclocked Orin should be on par with a base PS4, and we have nothing to pull from the 7nm NVIDIA desktop GPUs since they won't release until 2020 at the earliest, which means the Tegra version won't release until 2021 at the earliest

Orin is probably the chip they'll go with. It will likely have an 8-core CPU with much better core performance than Xaiver and likely better than the XBO / PS4, which means it will be able to get PS5 / XB4 ports without too much change to the physics or needing a new engine. The GPU is also powerful enough to continue playing games in 720p @ stable fps, but most improtantly it will be cheap because NVIDIA will have phased the processor out in anticipation for their 2nd gen Tegra and Nintendo can score an amazing deal on the hardware being phased out.

Nintendo handhelds always stay relevant for a long time. Even the 3DS, which peaked its first year, is still selling 8 years later. If that's what the 3DS can do, then imagine which the Switch can do, considering its sales are still accelerating.

@ABizzel1: Nintendo already stated that they want to keep the Switch around longer than just 5-6 years. Sono, they rather upgrade the chip (like they did with the DSi and the New 3DS) than replace the Switch with something different.

As for what they're gonna use, Xavier and Orin are useless in a console as they are meant for deep learning and tailored for self-driving cars. The question is if NVidia will produce a custom Tegra just for Nintendo or not. If they do, expect it do come close to Xavier due to having a more modern GPU (Turing GTX instead of Pascal or Maxwell) and not being tailored for server/ai usage (like Volta does).

While these specs don't seem that impressive, one can't push them too high without risking overheating or draining the battery too fast. These specs are still enough to more than double the performance over the OG Switch nonetheless.

Switch with the new version, Lite and Pokémon can catch up the Wii.

Not yet, Wii is still in it's prime there. It should stop growing however coming next year, at least until the holiday season.