SolSeraph follows Helios, a fair and just divine being who stands in stark contrast to the Younger Gods, cruel deities who torment early man. His mission: guide several human tribes back toward prosperity by building up their infrastructure, laying waste to the demons that threaten their villages and, ultimately, defeating the Younger God who rules over each region. 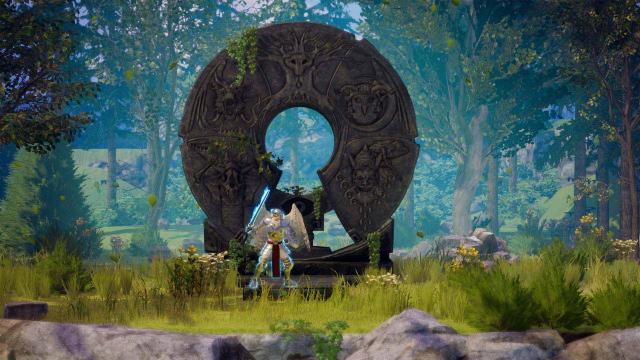 To do this Helios must answer the call in two modes: Strategy and Action. The former is an isometric real-time strategy/God game where players expand the territory of each tribe, build roads and houses, erect offensive and defensive installations to stop the march of monsters, and even manipulate the weather. The latter is a traditional action-platforming game where Helios explores 2D environments, avoids traps, and uses his sword, shield, and spells to topple beasts, goblins, and boss creatures.

It's a delightful mix of genres where neither half outstays its welcome. Real-time strategy, a strange bedfellow of home consoles, works splendidly here, thanks to intuitive hub-and-spoke controls that allow players to select their unit quickly, and designated enemy paths that allow would-be architects to figure out easily where to place their barracks, forges, and magic towers. It's a pared-down, simplified version of the classics of the genre, sure, but it's fun and addictive nevertheless. The only downside is that ACE Team doesn't experiment enough with varying rules of engagement. In the Vale of Yeg, you'll need to rely on livestock for sustenance (plants will shrivel in the cold) and in Sekh Desert you'll need to throw up wells to moisterize the soil, yes, but these are relatively small, shallow rule changes. In general, once you determine a successful building strategy, you can use it anywhere. 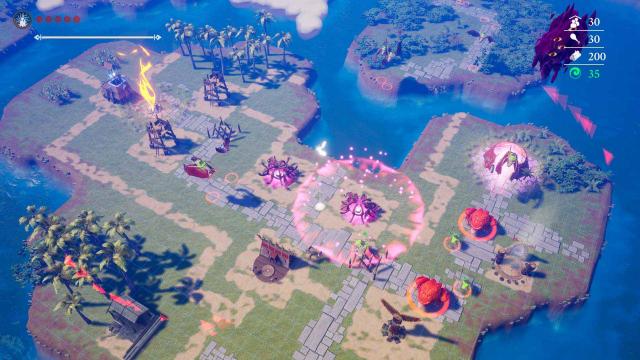 The Action phase, with its multiple routes, geographic diversity, and crunchy combat, is also good fun—although not as refined as the RTS component. Helios moves and fights rather stiffly in the 2D space, leading to some wooden gameplay. Also, the game plays around a lot with perspective, introducing enemies from the foreground or background into Helios's space, which makes it very difficult to determine when a piranha or bat, to name a couple of creatures, is actually within range; it's not uncommon to swipe uselessly at thin air while an approaching monster is a few frames out of touch. Finally, boss battles are straightforward and ordinary.

Both Strategy and Action are united by a beautiful story of human frailty and perseverance, written by Jonas Kyrazes (The Talos Principle). When Helios descends from the sky into each region, he finds several representatives from the local tribe who pray to him, speak among themselves, crack jokes, and learn lessons about themselves and their place in the world. Throughout the game's seven-hour running time, Kyrazes touches on themes of fear, family, loyalty, bravery, and heritage. SolSeraph is a touching collection of folk tales, as much as it is an entertaining strategy-platform hybrid. 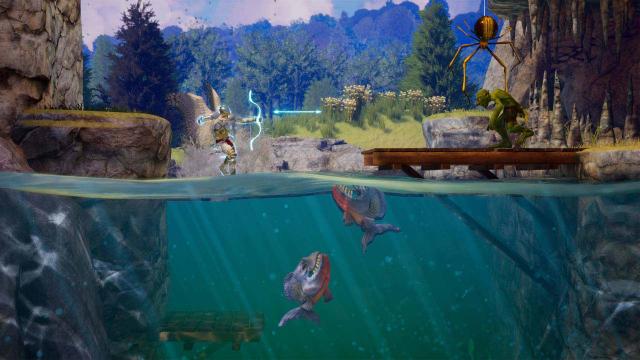 It's also a fine-looking production, especially in the overworld. The mythological landscape of the game, with its shimmering seas, verdant continents, flocks of birds, and the glowing, angelic form of Helios himself, is breathtaking. The music that accompanies these visuals, particularly the epic title card fanfare, is similarly triumphant. Scored by Yuzo Koshiro, who composed the soundtracks to ActRaiser and its sequel, this main theme is majestic, rousing, even regal.

Once again, ACE has taken two incompatible genres and merged them into a solid product. SolSeraph delivers the goods both in terms of real-time strategy and action-platforming—even if the latter is a bit rough around the edges. It's a winning experiment, in the end, with gorgeous views, accessible RTS controls, mechanical diversity, distinguished music, and a moving tale of human fortitude.

This review is based on a digital copy of SolSeraph for the PS4, provided by the publisher.