Tweet
by Thomas Froehlicher , posted on 16 March 2019 / 4,687 Views
The stage is set for the final showdown between the Japanese 3D fighting games of this generation - Tekken 7 has been out for coming on two years, SoulCalibur VI was released late last year, and now Dead or Alive 6 has freshly arrived on shelves. But after being dragged into the infamous censorship controversy, has Dead or Alive managed to stay true itself, and perhaps more importantly does it deliver an improved experience for fans with its sixth iteration? 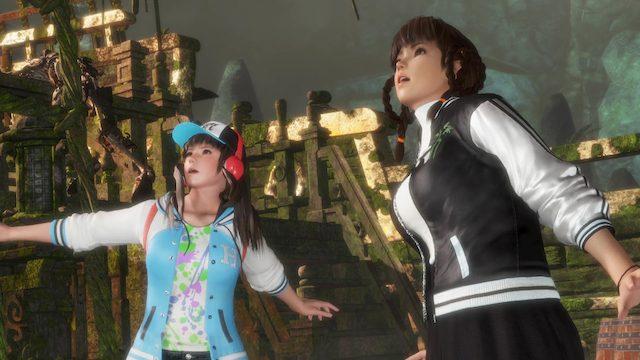 I personally haven't experienced what I'd consider to be a good story mode in a fighting game this generation, so the one in Dead or Alive 6, despite not being particularly impressive, is certainly not the worst in recent years. The plot concerns a shady company called MIST which is conducting secretive experiments. What it lacks in narrative originality it makes up for with beautiful but short 3D cutscenes, which include fun and cute moments, as well as a couple of fan-service scenes. That said, I must raise a big red card for the fact that PS4 share is blocked in story mode - players should be free to take screenshots if they wish; partial freedom isn't freedom. 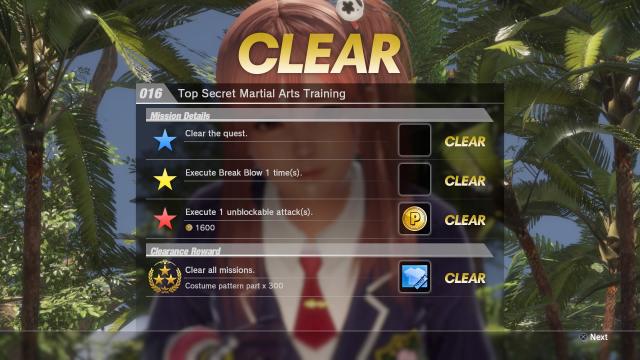 Everything has got to be an RPG in some way these days though, right? Team Ninja has introduced DoA quests - a series of over a hundred challenges which grant you in-game money and costumes parts. Yep, that's right, only parts. Full costumes can't be won outright and instead have figures attached to them which you must hit in order to get the right to spend in-game money to purchase them. Every ranked match (or every victory in arcade, time attack, or survival, although these modes are stingier) gives you points towards a costume, and you must gather the necessary amount in order to purchase it. This system was a particular pain at launch but has since been adjusted so that you win points only for costumes belonging to the fighter you used, which means that you can now collect the ones you want much more quickly. 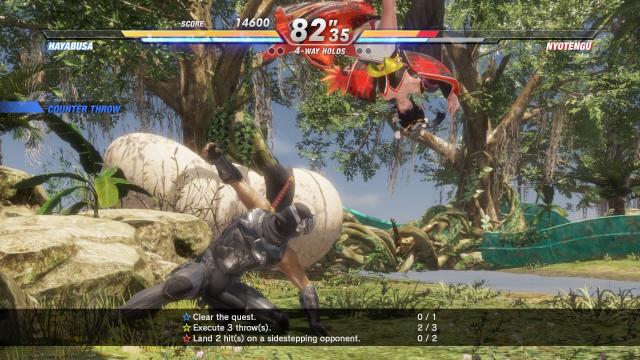 Battles in the DoA quest mode are fought with a set character and you have two specific actions you need to perform in order to win the fight. These actions can revolve around achieving a long combo, landing successful counters, side-stepping just in time, and so on. It's a little more tricky than the usual offline modes and definitely gives a different feel to solo play. You also need to clear three challenges in order to gain costume parts, which is not always easy.
Of course, you can also still tackle classic modes like arcade or survival if they're more to your tastes, and there are plenty of difficulty settings to choose from for those who want to test their limits. 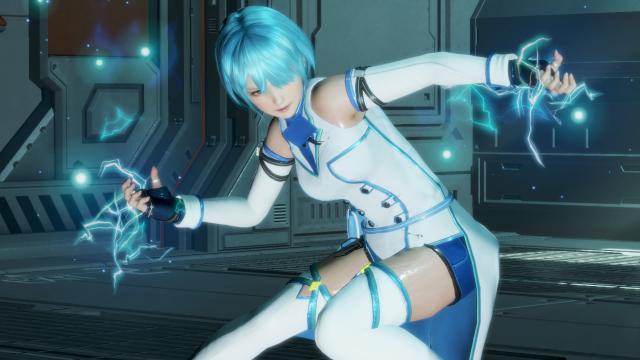 With 26 fighters in the roster, equally divided between pretty girls and cool guys, Dead or Alive 6 provides ample variety of gameplay and fighting styles. There's enough difference between the fighters to remain busy training and competing for dozens of hours. Newcomer Nico turns out to be a great addition to the roster - the female scientist has a decent balance between kicks and punches, and her lightning strikes boast significant reach in addition to being enjoyable to perform. All of those moves can be chained into effective combos, which makes her a very capable fighter.

Elsewhere, Marie Rose has received a substantial buff, especially compared to the final updates in Dead or Alive 5: Last Round. Some of her combo chains have been restored and she gets a new kick that blows the opponent away. This is a much-needed strengthening of the fighter given her limited physical power. Many others on the roster seem unchanged, which isn't necessarily a bad thing in my opinion. Change for the sake of changing things annoys old fans and disturb global competition. I can't express how disappointed I was to see that Taki's moves had changed almost completely in SoulCalibur VI, for example. The new moveset heavily conflicted with my habits from SoulCalibur IV, and I eventually dropped the character after a couple of hours. 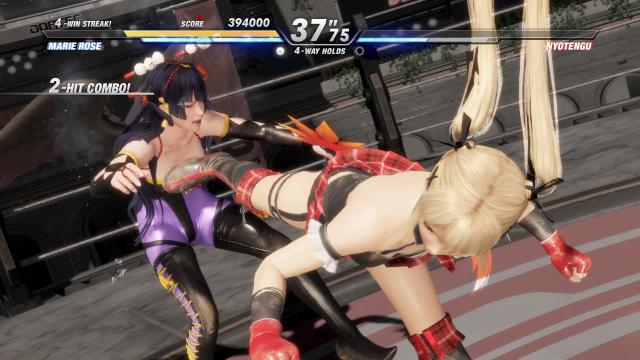 While the general amount of content is satisfying, I do think the development team should have included more in terms of locations. There are a dozen or so stages so far and only a handful have spectacular danger zones, in stark contrast to Dead or Alive 5: Last Round's. The fifth entry boasted plenty of stages with different floors and parts, including violent transitions when one player kicks the other out of the boundaries. In Dead or Alive 6 there are a few cool danger spots, like a pterosaur grabbing the fighter in a Jurassic Park-inspired stage, or an octopus slamming characters on the floor of a pirate ship stage. But most of the other stages feel very generic.

I also take issue with the season pass. Not so much its price, which is the main bone of contention for many, but the logic behind the additions. We learned that Dead or Alive 6 would add Mai Shiranui from King of Fighters via DLC in June, but Mai was already a DLC character in Dead or Alive 5: Last Round, so DoA fans are being asked to buy her a second time. That doesn't seem right; she should be free, and so too should Naotora Li and Momiji in the future. Paid characters ought to be entirely new additions to the roster. 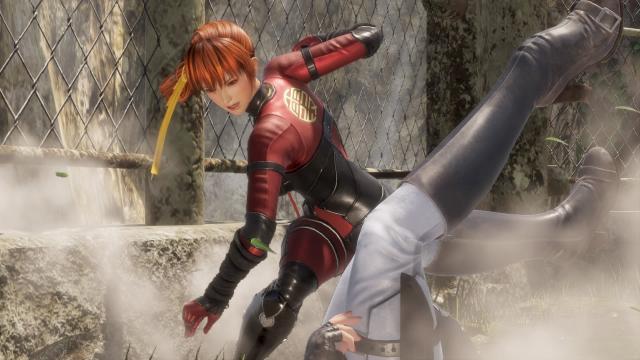 Dead or Alive 6 has a very precise, logical, deep, and yet very accessible battle system. Effective combinations of punches and kicks can be found quite quickly in training mode, while more advanced players can learn how to stun opponents the right way in order to deal the optimum amount of damage. Combo mastery doesn't make you unbeatable in KoeiTecmo's fighter, however - the square button can be used to counter any combo attack that's coming at you. Square + left, for example, counters a high punch, while square + right counters the equivalent kick. There are several combinations like that, so observing your opponent's style is one key to victory.

The combat system also gives absolute priority to downed players so that they can stand up; there's no risk of being stuck on the ground here. Aggressive competitors seeking to hit a downed player will always get stunned and risk receiving a large amount of damage for their efforts. Dead or Alive 6 thus possesses a very pleasant gameplay balance that rewards tacticians and trained players, but keeps battles fair at all times. 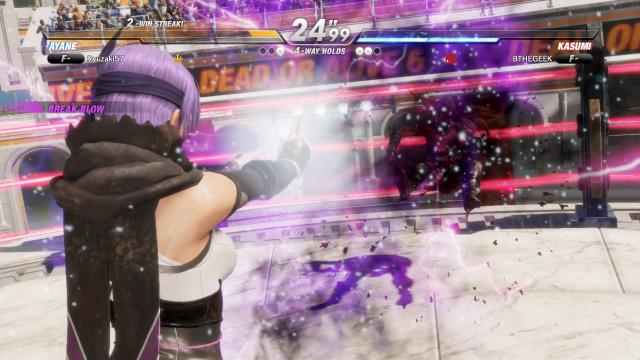 The big novelty in Dead or Alive 6 is what's called the "Special" button, which is set to R1. You can use it either to perform a master counter, meaning that left + R1 will counter any kind of move, or attack with a powerful combo by simply pressing R1 a few times. Of course the use of "Special" moves is limited, and as much as it may sound like a huge aid for novice players, the Special button doesn't break the general balance of the game. It's not especially easy to land it and the Special combo deals only slightly more damage than a normal combo. I think it should be seen more like a trump card to help turn the tides during a match rather than as a 'press R1 to win' move. That said, the final blow at the end of the Special combo is fairly impressive to watch.

Team Ninja's very efficient work stands out when you connect to the online servers, Dead or Alive 6 having one of the most flawless matchmaking systems I've ever come across. When turning on opponent search while training I don't think I've ever had to wait for more than 30 seconds to get into a match. Better still, I've never encountered a player more than two grades higher or lower than my own. This helps to ensure that opponents are close to your skill level most of the time, and you don't have to go into the menu options in order to set parameters. The online component is extremely well-made from the very start, which is great to see. 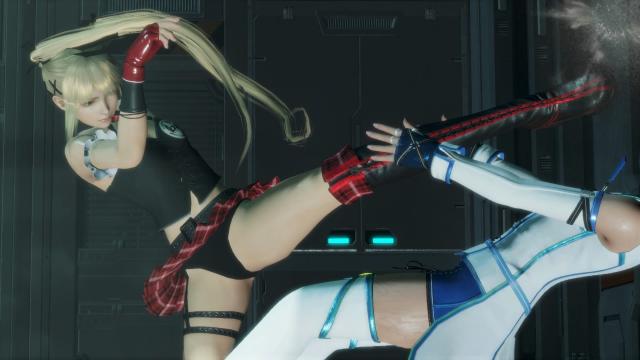 Dead or Alive 5 was one of the best-looking Japanese games on the PS3 and Dead or Alive 6 is also impressive. Character modelling is photo-realistic, motions are incredibly lively (in particular in the numerous stances taken by the fighters), and counters are stunning (there's not just one basic move; each character has several ways counter-attack and a flurry of fancy moves when doing so). In order to underline the fighting spirit of the game, Team Ninja has also added a few neat visual details like characters sweating, getting scratched, and losing their hairstyles. Fights are a pleasure to watch and the meticulous photo mode allows you to take full advantage of this.

Last but not least, despite all of the talk concerning censorship, Dead or Alive 6 absolutely retains the traditional sexual elements of the series, such as jiggling breasts and girls' underwear, which have been removed from a number of recent Japanese visual novels. The developer and publisher have both resisted the wave of censorship that is hitting PlayStation games lately.

While not especially innovative, Dead or Alive 6 is the enhanced experience of an already remarkable fighting game. Gorgeous, fun, and fair, it also stands out with its perfectly built online mode and great character roster. Additionally, the free-to-play version, called Core Fighters, has just been released and represents the perfect way to get into the Dead or Alive universe if you're a newcomer. The only major black mark against the game is its DLC practices, which currently sound like they're going to be abusive, but that will have to be judged in due time. 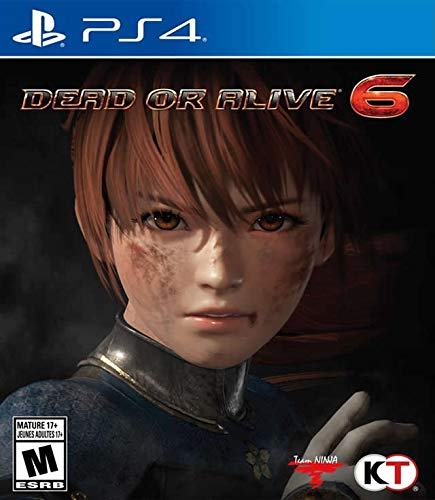