Rumour - Scalebound Being Revived as a Nintendo Switch Exclusive - News

According to a rumour on Nintendo Insider, the former Xbox One-exclusive action-RPG Scalebound (which was cancelled by Microsoft in January of 2017) has been revived and is coming to Nintendo Switch as an exclusive title with Nintendo as publisher. The article notes that it's unclear whether the PlatinumGames-developed title has retained any of its original elements or has been rebooted. 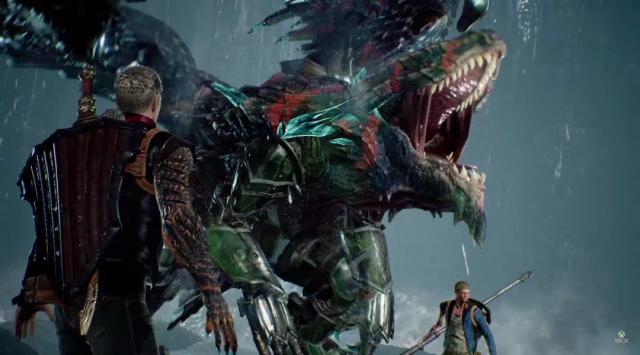 If true, the news would mark a continuation of the partnership between Nintendo and developer PlatinumGames that began in 2013 with the release of The Wonderful 101 and continued through to the recent announcement of Astral Chain.

Seemingly corroborating this rumour, Imran Khan from Game Informer appeared on Kinda Funny Games last week and revealed that a game "thought to be dead" was being revived by Nintendo that was "not one people would expect". Former IGN Producer Alanah Pearce also weighed in on the rumour, noting that she had heard that Scalebound was being revived "way back in June last year" but didn't believe the news at that time.

I was told Scalebound would still come out (just not as an Xbox exclusive) by someone I consider fairly credible all the way back in JUNE last year, but didn’t believe them.
Maybe it is true 🤷🏼‍♀️. https://t.co/kqvry3CSab

In its previous incarnation on the Xbox One, Scalebound cast players as Drew and his dragon Thuban in a fantasy world and focused more heavily on action-RPG elements than the traditional hack 'n' slash action that PlatinumGames were known for.

I would buy this day one.

If true Platinum is going full beast mode on Switch. Bayo, 1, 2, 3, Astral Chain and Scalebound? That's quite a portfolio fairly early in the Switch's life cycle even if they all release by 2020.

Huh, this is sounding more and more plausible. Think about it. Microsoft lost the trademark, meaning someone can make a game with a similar concept and the exact same name. Sure the game wasn't running well on XBO, but if it's being started from scratch, it could be designed from the ground up for Switch. Since it would have to be started from scratch anyway for copyright reasons, this works out well for Nintendo, though obviously it's a lot more work for Platinum. But if Nintendo is paying for it and Kamiya really wants to make it happen, then that doesn't matter.

So between that and three different sources hearing that Scalebound is coming back, one that thinks it might even be rebooted, one that heard it wouldn't be a Microsoft game nearly a YEAR ago, and one that heard specifically that a cancelled game is being revived by Nintendo, it seems like this is precisely the case. Three different people from different places heard that Scalebound is coming back, all three agree it isn't Microsoft publishing it. Two believe Nintendo is publishing it, and one thinks a complete reboot is possible. The oldest source is from last summer and has the least detail, the newest one has the most detail and shows exactly how it could work both IP wise and hardware wise. It really sounds like a plan coming together and slowly leaking out. Maybe we'll get an announcement come E3?

One thing is for sure, if it is in development, we won't see it for years. Up until a few weeks ago Platinum's 206 devs were developing 4 different games; Astral Chain, Bayo 3, Babylon's Fall, and Granblue. Platinum finished their work on Granblue just a few weeks ago, so maybe that team is now moving on to work on a Scalebound reboot, but if that is the case I wouldn't expect to see it release before 2022, as they would need to start from scratch since MS owns all existing Scalebound assets.

Tempered expectations here. Scalebound looked plenty fun, but the Switch version will likely play/run very differently than what we were shown in the trailers.

Omg.. Microsoft playing all friendly with Nintendo and Big N taking IPs from them behind their back that would be kinda hilarious. They got the crossplay and now they take the dead IPs that's amazing lol. Anyway, Nintendo really is in a position to do that. Great relationship with Platinum and console is selling incredibly well, and games like these would do well on Switch with the mature audience/lacking of that genre. The only game that made me want an xbox one, was sad that it got cancelled. It sounds really interesting tbh. Wanted Eternal Darkness 2 but this makes more sense.

That would be crazy. This was the only game that ever made me slightly interested in an Xbox one (I know some of the trailers weren't great, but still). If this game came out for the Switch and succeeded it would be a huge slap on Microsoft.

If you look up the trademark, MS let it lapse. It's been abandoned.

I'd want to buy this, but I'd love for it to be as it was back then, and at 60fps. Platinum's games just look beautiful when they are at their best and run at 60.

Hmm considering ScaleBound ran like ass on a X1, thos coming to Switch is going to be a uphill battle. Interesting to see.

MS has the copyright but not the trademark. That means that the version that couldn't run on XBO is not what Nintendo is getting, as that version is copyrighted. Instead it'll be developed from scratch with the same concept and the same title, since MS lost the trademark. Being developed from scratch, it can be designed from the ground up to run on Switch. A new art style that lends itself better to Switch's graphical capabilities would only strengthen Nintendo's legal case that it doesn't violate copyright.

Pretty sure Scalebound IP is owned by Microsoft, so this make this rumor very unlikely.

True, however maybe MS sold the IP to Nintendo.. they have a stronge relationship

It's not trademarked so anyone can still use the Scalebound name for their own thing they just can't use the assets, art and audio MS has.

But...why? The game looked bad. Why would Nintendo want a bad game?

Remove the multiplayer, QTE, do something to smooth down the FPS and you have something that is interesting.

It has the potential to stand out. There aren't that many DMC-like games nowadays. Granted, the Switch already has Bayonetta but it still could do decent numbers, imo. Not to mention the whole "revived exclusive" angle gives them a bit of hype.

That would be a hilarious massive beating. Hope they revert it to before MS crammed in muiltiplayer and QTE etc.
But Nintendo? I would have thought PS4 would be the first to snap it up.

In-fact has that ever happened? One company cancelling an exclusive, and another picking it up?