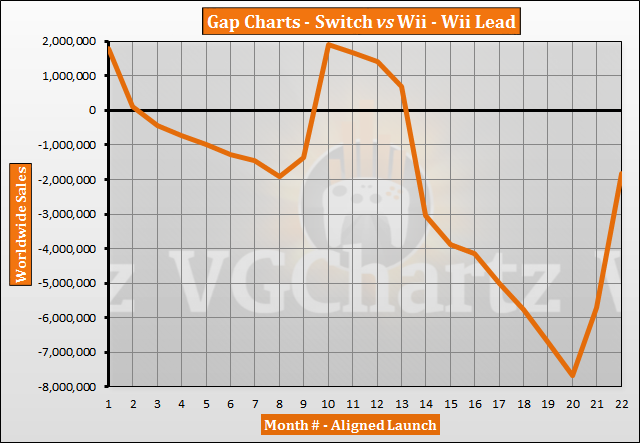 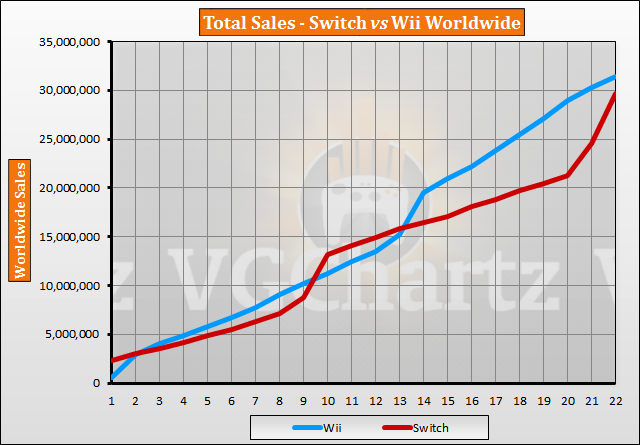 This is looking a lot like the PS4 v. Switch graph, interesting. I wonder if Switch will continue its trend with the FY2019 lineup vs. the shear craze of the Wii in the upcoming months.

One difference between this and the PS4 vs. Switch graph is that in the latter case, the two curves criss-cross each other back and forth. The Switch didn't cross the Wii curve this time from holiday sales. That's because the Wii had record breaking sales for it's first 3-4 years and sales plummeted after that. PS4 and Switch have had strong and steady sales so far, so they are fairly similar.

I do expect Switch sales to shoot up, like the Wii, this year. But even then it will take a while for it to catch the Wii. The Wii itself was having record breaking sales for those first few years. The way to beat the Wii is to be able to "go the distance". No console is going to beat the Wii at the 3 year mark, but a strong console can beat its lifetime total.

Nintendo said it had sold 32.3 million Switches by the end of December. Does nearly 3 million still on shelves make sense? It sounds like a lot to me.

It's a lot, but after the holiday season it's not that unusual. Keep in mind shipping can take over a month from Japan depending where to send to, so retailers generally make big orders before the season to make sure they have enough at hand, and by that generating some more surplus than the other quarters

Huh. I wonder how long that surplus generally takes to sell though? If it's a while, that would artificially deflate Nintendo's sales numbers for Switch in the next quarter. I mean 3 million might be most of the next quarter's sales, so the next report might say Switch only sold a million and change for the quarter.