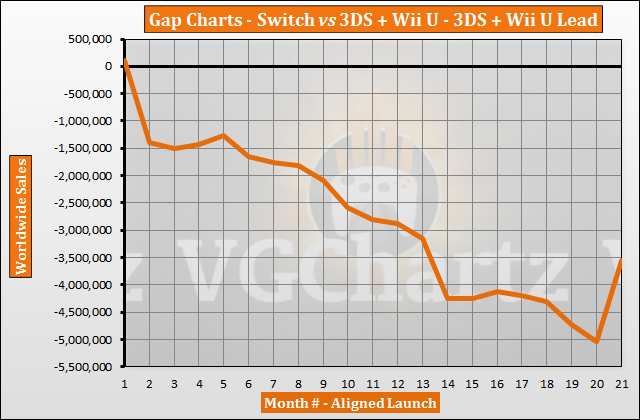 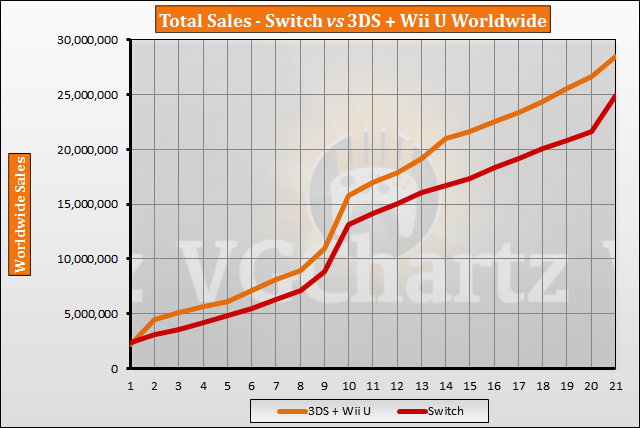 The 3DS launched in February 2011 (however, 3DS sales have been aligned to March 2011, since it only launched at the end of February in Japan), the Wii U launched in November 2012, and the Nintendo Switch launched worldwide in March 2017. The Switch has sold 24.91 million units, while the 3DS and Wii U have sold 28.47 million units during the same timeframe.

Looks like the cliff has already been fallen off of.

And it's falling up the cliff now

And up it goes now !

This is going to be an interesting one. Wii U sold 13.5mill and the 3DS is dying off with it probably limping sales throughout the rest of its life to hit around the 78mill mark. This means the Switch needs to reach a lifetime sales total of 92mill to beat these two combined. A tough ask but possible if they can maintain the momentum they've created. I think it will fall a little short (somewhere between 80 and 90mill) but that won't make it a failure in my eyes, it would still be a great run!

Interesting chart. Thanks for posting. :)

3DS+Wii U has the lead, but we get a little hint of the Switch gaining ground.

That second chart seems to have it's colors mixed up if it's supposed to say "Switch Lead".

First chart was wrong. The 3DS and Wii U are ahead of the Switch. I've fixed it. Thanks for pointing it out.

@trunkswd No, thank you for fixing the chart. ^^