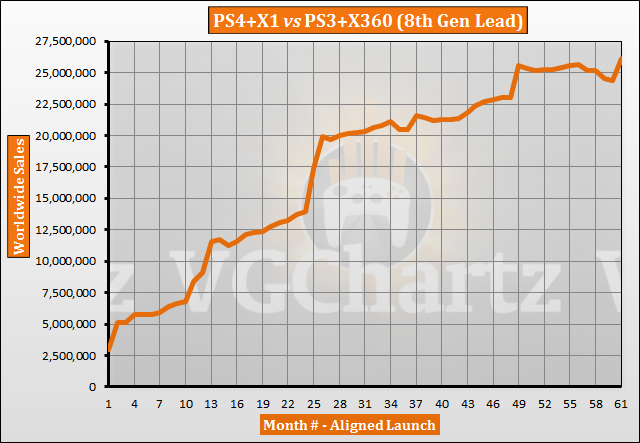 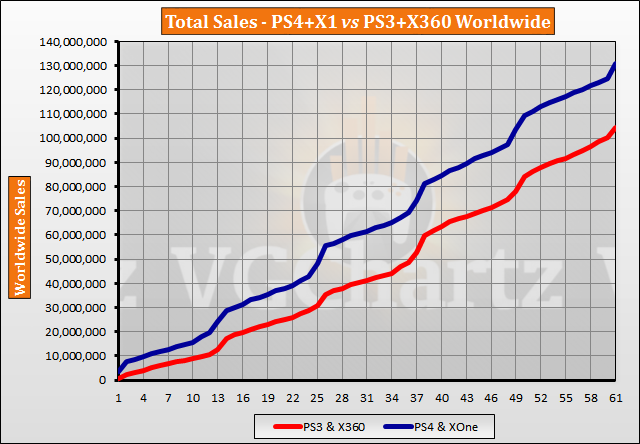 Wow the PS4 is doing all the heavy lifting this gen! And then some!

PS360 will likely minimize the gap due to Kinect and PS Move within the next 2 years.

Pretty obvious to me that the Wii attracted away some of the customers that normally get Playstation or XBoX. If you look at PS2+XBox it's pretty close to what this generation is tracking at. The Wii attracted them away during generation 7 and then they came back for generation 8.

Just look at the chart above. PS3+XBox360 is clearly tracking below PS4+XB1.

Is there a Switch vs XB1 gapchart somewhere?

Yes, ltest one is from October, though: http://www.vgchartz.com/article/393859/switch-vs-xbox-onevgchartz-gap-chartsoctober-2018-update/

Additionally, there are the global lifetime sales, starting with Switch launch month. There you can see how the Switch is crawling closer and closer to the Xbox line: http://www.vgchartz.com/article/435139/switch-vs-ps4-vs-xbox-one-global-lifetime-salesnovember-2018/

Here is the latest one (October): http://www.vgchartz.com/article/393859/switch-vs-xbox-onevgchartz-gap-chartsoctober-2018-update

Alternatively, you can check the global lifetime sales comparisons beween Switch, PS4 and XBO and see how the red line is creeping closer and closer to the green one: http://www.vgchartz.com/article/435139/switch-vs-ps4-vs-xbox-one-global-lifetime-salesnovember-2018