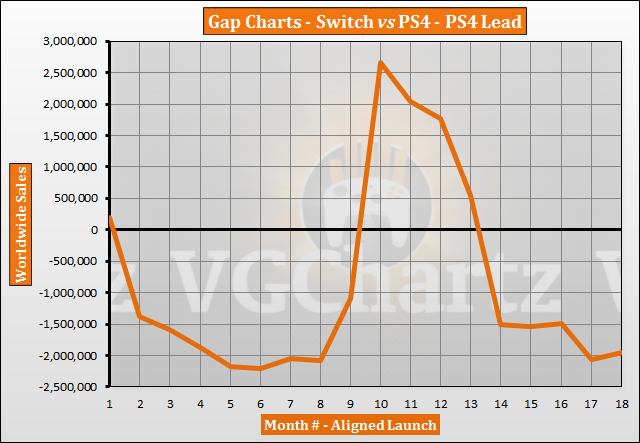 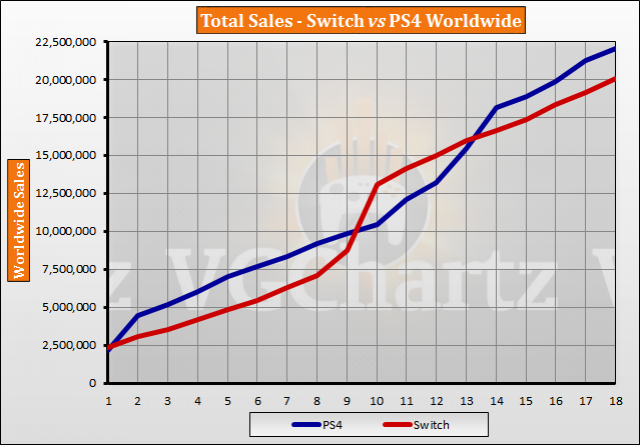 This graph is going to look like a double helix.

Personally, I don’t see Switch beating PS4 in the long run. Even with a significantly stronger first year, and arguably no competition besides the 3DS, the PS4 has still managed to stay ahead more consistently. It’s unlikely Switch will have the same growth YoY, it will likely peak a lot sooner than PS4 did, and it’s sales will drop more heavily YoY after its peak. A hardware revision doesn’t guarantee Switch’s longevity either. Certainly didn’t help 3DS anyways. We’ll see though. Nintendo is doing a lot better with third party titles this time around, they just need to seriously get their network in order because that thing is a travesty.

Please give me your crystal ball ^^ two holiday seasons (Ps4) compared to one holiday season (Switch) after 18 months don't say anything. After 24 months we can have a more clear vision for the future.

True, but I’ll reiterate: PS4 launched at the same exact time as a direct competitor, and it didn’t get its first highly rated AAA exclusive until early 2015 with BloodBorne, unless of course you count TLoUR. Switch got installments of the two sod Nintendo’s biggest franchises, MK8, and a sequel to Nintendo’s most successful new IP since Animal Crossing, all in it’s first 7 months. It also didn’t have any competition for its portability demographic, aside from the 3DS. Both PS4 and Switch have their advantages, but Switch is clearly the one with the higher advantage to sell well.

A direct competitor who totally botched it's launch already before it started, and the other competitor was already a flop. Outside of US, UK and Japan (where the PS4 was lagging behind early on) the PS4 ran practically outside competition. Compare that to the Switch launching at the peak of the PS4, the Xbox ONE slowly trying to recover and the 3DS refusing to die to the point where 2017 was it's best year in years.

As for the games, yeah but it's not like Sony didn't have exclusives, just that games like Knack, Evolve or The Order 1886 weren't that good - yet still better than the XBO's offerings.

@VGChartz: Would it be possible to add a notion on the largest gaps in either direction additionally to the gap changes and current lead (if different from current lead, of course)?

The Switch will probably jump ahead and stay there for a while. The question is whether the Switch will stay relevant when the inevitable next gen of consoles comes out. If it can (which I don't really think is likely) it may actually outsell PS4 in the long run.

Nintendo consoles have historically had a shorter lifespan than Sony's, especially the ones that are underpowered, so I'd be surprised if the Switch ended up beating out the PS4 in the long run. I suppose a large part of it is hinged on whether or not Nintendo can release a more powerful Switch. At least that's my opinion.

I think it will. Both current gen consoles should still be fed with third party games for several more years after the next gen arrives (PS360 even still get some games almost 5 years after their successors arrived), and making a game not just for the Switch, but for 3 platforms is more beneficial for publishers. And of ourse the Indie wave will continue on Switch

Waiting for Rol to school you all...

The Switch will definitely jump ahead and stay there. In fact, the PS5 won't slow Switch a bit. PS5 will probably release with a $400 - $500 price tag, and Switch will be due for a price cut about the same time. Switch is going to have a huge price advantage over PS5. Historically price advantage is what really matters, not power advantage.

On top of that Switch is already getting really good third party support, and it usually takes a couple of years or so before it really starts getting its strongest support. Expect Switch to get the best third party support that a Nintendo console has ever had. It will be selling for a very long time even if Nintendo only has crap support at the end.

I was told to take a look at this.

@JWeinCom: There's no reason to say "probably". The different launch months of the PS4 and Switch mean that their respective holiday boosts occur at different times. The current gap is only 2m and the upcoming four months are May to August for PS4 and September to December for Switch. A non-holiday quarter is ~3m, a holiday quarter is ~8m. The Switch will definitely be ahead of the PS4 at the 24 month mark; using 12-month-intervalls is the smartest thing to do when dealing with different launch timing.

As for the Switch staying relevant, it's a given that it will stay relevant. Nintendo holds a monopoly in the portable console market and that's not going to go away. Additionally, it should be abundantly clear that Switch isn't selling because of its graphics or AAA third party games. New PS and Xbox consoles aren't going to change anything that isn't already present at the current time. For Switch to lose relevance, one would have to assume that Nintendo, Japanese third parties and indie developers all of a sudden decide to stop developing Switch games.

Keeping these things in mind, it becomes a simple matter of analyzing Switch's software support and determining whether it follows the trajectory of Nintendo handhelds or rather the recent trajectory of Nintendo home consoles. Given how robust the presence of RPGs is on Switch, it should be easy to tell that Switch isn't shaping up like any of the recent Nintendo home consoles, so you can count on a long lifespan without any need for a more powerful Switch.

@Bofferbrauer2: If you wonder about Switch's future third party support, you should remember which console will be the clear market leader in Japan. Otherwise you are falling into the same trap as everyone else, namely prioritizing Western AAA third party support despite a complete lack of evidence that it's driving Switch hardware sales.

Said baffling belief that AAA third party games are important is what always lead to the concern regarding Switch's processing power. It's long overdue that people who visit a sales website actually look at the sales data and estimates that can be found on said sales website.

I just wanted to point out that support from western publishers won't suddenly stop when the ext gen starts, and that there's a good reason why it would continue for years after that. I personally don't care about them (very few games from them interest me, and if they do I'll mostly buy them for my PC), but I know many other here do.

Well said, Rol. I just couldn't help but notice that the Wii had a rather short lifespan, and there are similarities between the two consoles (Wii & Switch) when it comes to relative hardware power. Perhaps the handheld nature of the Switch will be it's saving grace, as the hardware is exceptional when referring to it as a handheld, but subpar as a console.