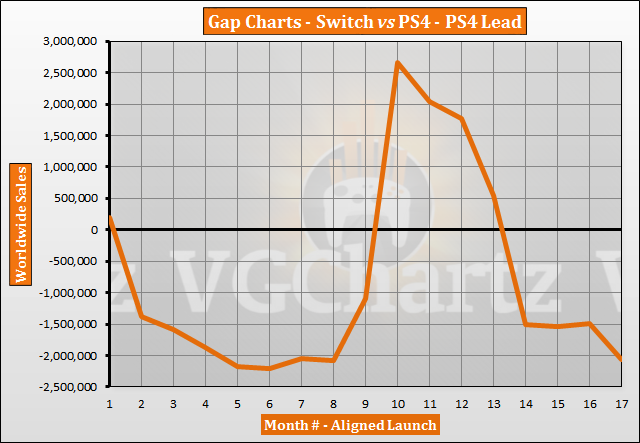 When the release months are not synched up for these aligned launch updates, could you please add the month and year that this months' update corresponding to? It's fairly crucial information in terms of what is being compared since different months have different sales expectations.

I think there is 2 times the same source in the a href for the picture.
We can't see the blue and red lines of cumulated sales.

considering the extra holiday PS4 had in 2013, Switch is doing incredible well.

In a matter of months (November/December) will back above PS4, and it may stay above it for a very long time.

Actually because of all the supply issues PS4 had during 2013 holiday season, I think PS4 is doing very well even compared to Switch. With all the big games like Spider Man, Red Dead Redemption 2, Black Ops 4 etc. coming soon, it will most likely extend that lead during september and october, maybe even november. I don't think Switch can pass it during november or december and even if it does, it won't last long.

Super Mario Party, Pokémon Let's Go and especially Smash will blow the Switch sales to new hights. September should go to PS4, no questions asked, but I wouldn't be so sure about the other months

Nah, this looks like a difficult ride for the Switch. It doesn't look like the Switch can hold up launch aligned, although it's close. But I strongly suspect the Switch has not such a prolonged life like the PS4.

Please fix this line which is written twice, it is twice the same picture :

It should probably that one www.vgchartz.com/articles_media/images/july-2018-sales-6-2.png