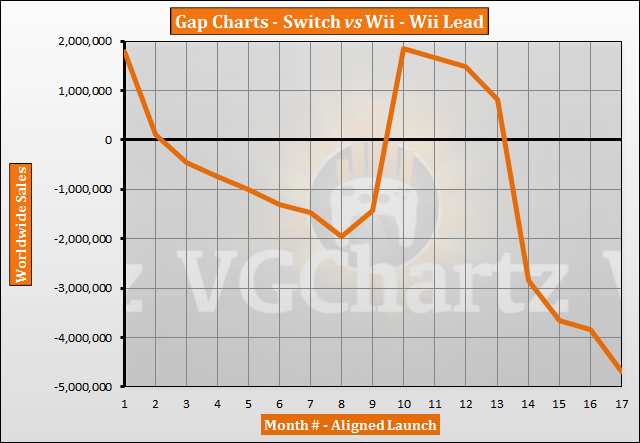 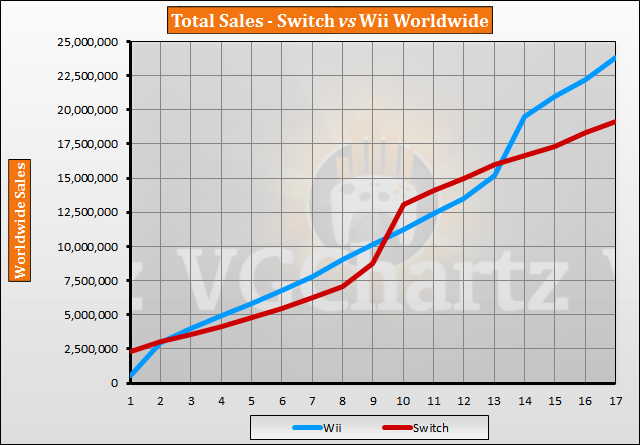 Just wait for next Q3 to be sure that the fight is over.

Not surprising, the Wii sold like 24 and 21 million in its second and third full years, so currently it is in its second full year in this chart. Wii sold unbelievable numbers its first 3 or 4 years. Wii sales died off after year 4 though. Switch should fall well more than 10 million behind the Wii in the next two years, but then it'll start reeling the Wii back in after that and well we'll just see where it ends up. I think it has a decent chance of passing Wii's lifetime sales in maybe like year 7 after Switch 2 is out.

The Switch isn't gonna be able to keep pace with the Wii. But using math we can predict when what percentage of total sales the Switch will have in a given number of months after launch. It would take the Switch about 7.5 years at using the current slope to match what the Wii sold in 6 years. Therefore even though I predicted a maximum of 65 million for Switch, the math and history indicates that Switch has a potential of selling a maximum 81 million units lifetime.

Except that the slope isn't going to remain constant so it's impossible to accurately predict its maximum lifetime potential at this point. Nintendo could theoretically release a portable only Switch for $199 or even less.

Oh, this so very strong Wii-momentum. I wasn't aware momentum picked up so much in the second year for the Wii.

They did launch at different times of the year. So the holiday boost doesn't line up between the two.

I'm aware and you see the holiday boost. But we are past the holiday boost, if I count right the current month must be march for Wii. The holiday boost brought 3.5M in favor of Wii, but since then the Wii continued to win against Switch, so it has a better momentum. Currently I think Switch can't take back the lead in the holidays.

Wii's sales the first few years was insane. Switch has no chance of keeping up. In the later years though Wii sales died off and that is when Switch will start catching up.

Yes, we see it currently with PS4, the Wii falls behind after being in front before. If the Switch can maintain a longer life than the Wii is something we will see. I think a turning point may be the introduction of PS5 and Scarlett. If Switch can transform it's image enough to still be hot in the market, then it will blast past the Wii.

Find it in your heart to forgive me considering I paid $400 for my Wii due to scalpers.

Don't feel ashamed at all. What you have done is tricky and smart. I do the same, and I honnestly don't feel bad at all. Haters on your story are just frustrated because they are not able like you to make some profit. Don't worry for the guy that you scamed, if he was able to pay his Wii that much, it means that he had the money for it and you brillantly tricked him.
There are so many dumb people in this world who can not just wait a few weeks before getting a product, and you are just exploiting this to make some profit. Well done. I have actually bought 6 copies of BotW on WiiU to keep it with intact blister and resell it 3 times more in 10 years.
So incredible that people annoy a person who makes sometimes a profit of 100$, while they actually work for a corporation with a head direction who steals much much more money everydays.

Much appreciated. I've considered making similar types of investments, but never did the research to really know if it's a smart move or not. It seems like Pokemon games are a guarantee, as nowadays you can't find a used copy of many of these games for less than what they were when they were new.

I can understand why scalpers come off as annoying, but what is the issue with buying multiple new copies of a game to sell decades later? I get the feeling you didn't think this one through. You're just a... a... a GOON. And I thought we could become good friends and share tales of our grand adventures in DQXI next week. Not after that little maneuver.

You are distorting the market. Not even are you buying unnecessarily more than you need, you also restrict some other person from buying it under the same conditions as you. You are furthermore profiting off of something that you didn't produce/invent and have no right whatsoever. This is the behaviour of a parasite. If you earn money buy honest work you can be proud about yourself but THIS is nothing to be proud of, this is pure greed.

With all due respect, I've been very polite to you and was actually under the impression that we were half-joking with each other (the last sentence of my original post even made a mockery of myself). Just so we're clear, the only thing I've ever "scalped" was that Wii, and it didn't even offset the mark-up I paid on my personal Wii. It wasn't premeditated, nor do I think I should feel shame if it was. Developers would be more than happy for someone to buy ten copies of their product. I don't think it can be disputed that more money goes to the people who deserve it. Are all retailers parasites since they are just profiting off of other peoples' creations? I have a lot more I'd like to say, but this is a comment in a news post, so I think we're done here.