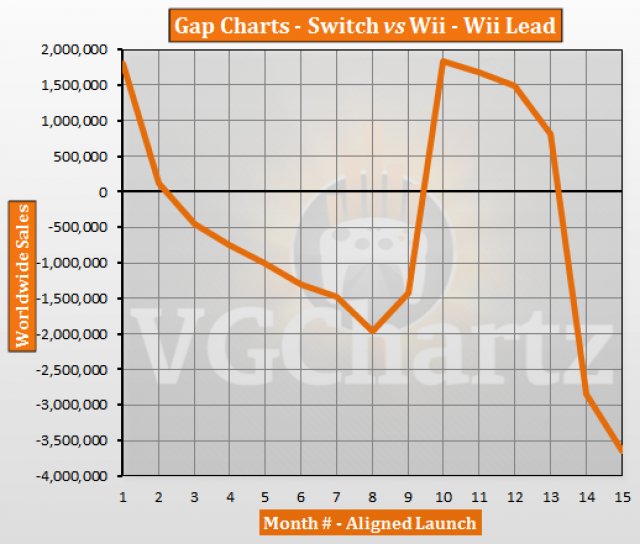 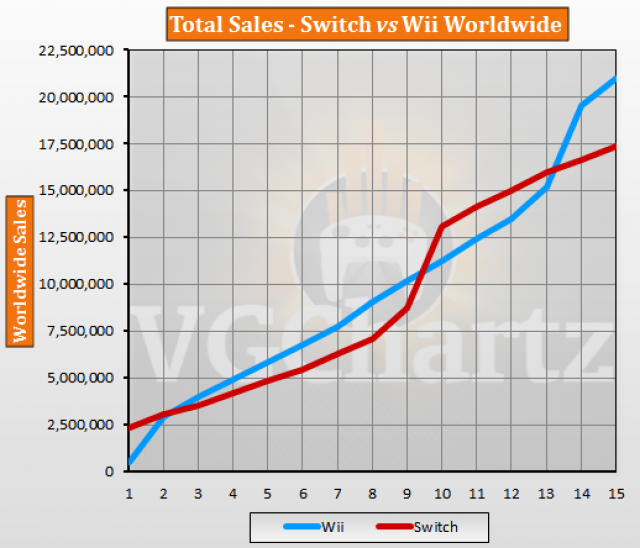 This is interesting to watch.

You can't say that because Switch had only one christmas holiday, while the Wii had two

With Smash and Pokemon next Chistmas we could look at some serious numbers for the Switch. Maybe Enough to close the gap.

Getting 3ds is fine.

It might surpass the Wii again this christmas or will atleast shrink the gap a lot. Then Wii will take it again. Wii was well over the PS4 at some point but we all know PS4 will surpass it in the long run, so saying Switch will never surpass the Wii cause it's behind a console that had 2 christmas.. that's pretty negative.

Switch is just above 3DS in aligned sales. 3DS recieved all the games people are boasting about coming to Switch, yet it still failed to keep ahead of PS4, despite launching 2 1/2 years earlier. Switch will do around 85 million LT, is my prediction

What you failed to mention was that the 3DS was selling for $170 after it was selling far below Nintendo's expectations at $250, just 4-5 months after launch, meanwhile the Switch is still selling at $300. The price is almost 2:1 and yet the Switch is outpacing the 3DS. What does that say about the system's legs and long term prospects.
Also, Wii sales dropped like a bad habit after 2010. It had an incredible peak, but its legs were very lackluster. So, the Switch is lagging behind it right now because it is now going up against the Wii's peak year, 2008. The Wii sold 24,188,263 units that year. Not even the PS4 was able to reach that level in one year and it never will. But, it's a forgone conclusion that the PS4 will pass it in total.
This is not a sprint, it is a marathon.

Don't forget that the 3DS already got a big pricecut while the Switch didn't. And yet, Switch is consistently outselling the 3DS. So unless Switch falls of a cliff somewhere it will do much better than the 3DS

All this whining and not one explanation as to what Switch will have that 3DS didn’t. DS launches at $150, and 3DS was still outpacing it at launch, yet no amount of price drops and games could get it even close. Just like 3DS and Wii, Switch will drop like a rock. The only reason it had such a great first year is because it cannibalized the Wii U, and recieved what would’ve been Wii U’s best end-of-the-gen titles.

Whining? Read again, because we are explaining exactly where you got it wrong. As what the Switch has what the 3DS didn't: No massive pricecut, and yet the Switch is still outselling the 3DS despite it still being at it's base price. It has stronger first and second party support since no need to split the games among platforms anymore, much more renowned third party games than any Nintendo console since the SNES, much better Ads than during the 3DS/Wii U era with a clear message.
Now if you consider all that whining and not an explanation, rest assured I will consider your posts as just whining about the success of the Switch and that you just can't take it

Additionally, when the DS came out, the overall landscape of the video game market was a completely different animal from what it was today, especially the handheld market.
Back then, there was no such thing as mobile gaming or smartphone gaming. The audience that is currently making up that sub-market of gaming was on the DS and PSP. Since the first iPhone came out in 2007, smartphones have slowly chipped away at the dedicated handheld market to the point where it is at now. There was a combined total of 235 million DS and PSP units sold in 7th generation, that number dropped drastically to 88 million 3DS and Vita units in the 8th generation. Because smartphones were a much more convenient method and way of gaming for that casual audience then buying a dedicated gaming handheld. That's one of the biggest reasons why Nintendo went the hybrid route with the Switch, to make a dedicated gaming handheld that could be comparable to home consoles and operate like a home console in terms of graphical & technical capabilities and convenience to distinguish it from smartphones.