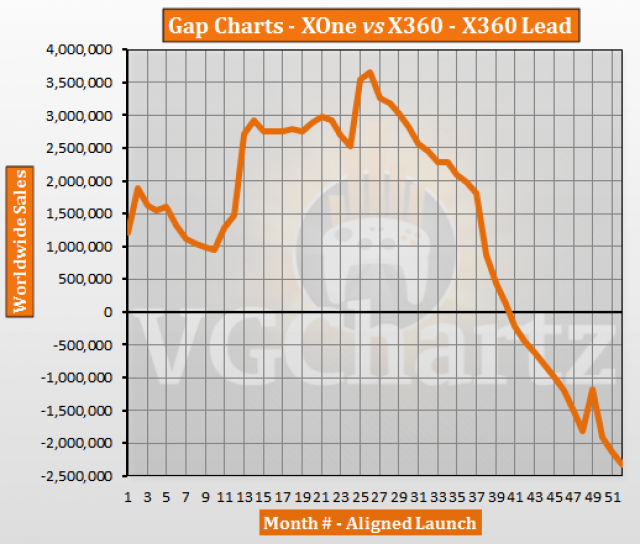 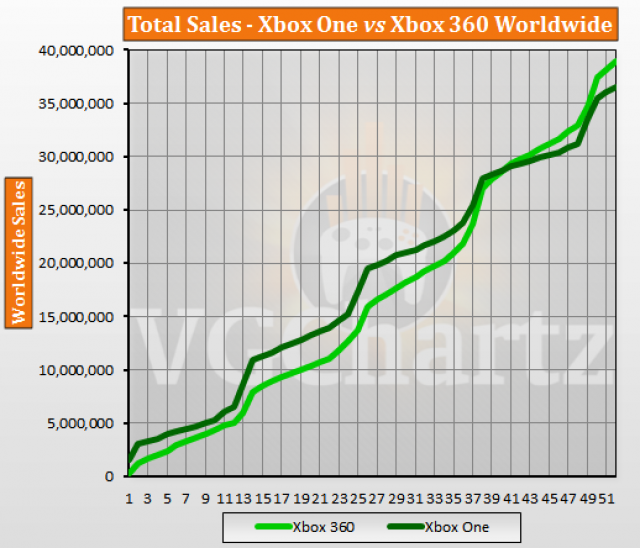 Suffice to say, Microsoft will need a 180 to turn the tables around !

They need to try turning 360 degrees and walking away.

A trending that I don't see reversing again.

This is very interesting... It seems Xbox ONE isn't too far behind the Xbox 360, suggesting that perhaps it isn't Xbox ONE that is selling badly - rather it's the PS4 that's selling very well.

Regardless Microsoft needs to make more first party exclusives for the Xbox ONE, but I don't see how the Xbox ONE could do any better considering all the exclusives for Xbox now come to Windows 10. I have Gears of War 4, but not on Xbox - I play it on PC - and so for me there really isn't any reason to get the Xbox ONE. In fact if you have the PC - PS4 - SWITCH combo then you can play all the exclusives this generation - I think that's what a lot of people are doing.

Fairly sure the numbers still haven't gotten to when the kinect releases. Which will blow the difference away.

The gap will increase a lot faster the longer the gen goes. X360 was doing fine until like year 7, while X1 started dropping behind after 2 years.

And yet, there are probably more working and actively used Xbox One console now than there were Xbox 360 systems then. By this point in the Xbox 360's life, the number of RRoDed Xbox 360's was huge, the extended warranties for many systems had run out, and the Xbox 360 S was out (which solved the RRoD problem, and had some good bundles) so replacement was more appealing than repair. Xbox Live engagement has never been higher which is a metric we can use to support this theory.

the jasper solved RROD ;) then when slim came out RROD return with the slim I mean it was still very small percentage of the console but, u can not find any jasper with RROD but slims and E-s you can see on the internet there is some cases. Just saying that the jasper was the most reliable version of the 360 that never had RROD