Blasters of the Universe (PSVR) - Review

For all the experimentation happening in the VR industry these days, there's one genre — shooters — that seems to work best. Blasters of the Universe, the cheekily-named VR shooter from developer Secret Location, is further evidence of that. It's an immersive first-person bullet-hell shooter with amazingly accurate controls — thanks to dual Move controllers, mandatory for this title — and lots of weapon customization options. Unfortunately, the game is painfully short; there are only four brief levels.

Blasters tells the story of Allen Fitzpatrick, an aging, unemployed man-child who excelled only in one place on Earth: the local arcade. There he was someone of importance and consequence. So Allen did what anyone in his position would do: transfer himself into virtual reality. Once in VR, Allen christened himself Grandmaster Alwyn, crowned himself monarch of a digital, neon kingdom, and built an army of pixelated bodyguards. Enter the "Blasters", a group of soldiers tasked with toppling Alwyn and taking back VR. You are one of those Blasters. 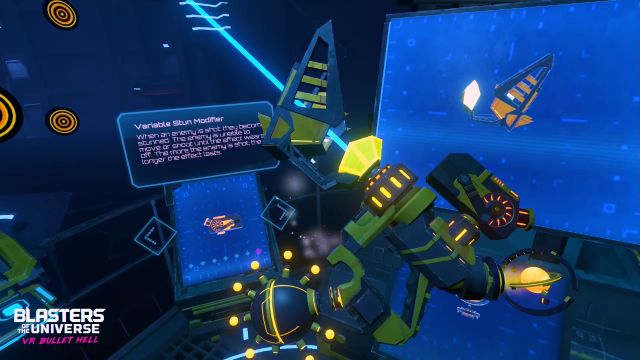 The game begins in the armory, where players choose from dozens of weapon bodies, attachments, scopes, add-ons, and ammo types. From there it's out into the virtual wasteland, to fight inside four of Alwyn's arenas. VR users can opt to play through the game in the standard "Hell" mode or in the newly-added "Casual" mode, which makes the default difficulty a lot more bearable.

The Move controller layout works splendidly. Using the PSVR headset to scan the VR world, and employing Move controllers to grip your digital gun and shield, it's easy to disappear into the neon wonderlands of Blasters of the Universe. Aiming is joyfully simple and intuitive, and dodging incoming projectiles smooth and precise. None of this is effortless, however. The game is a bullet hell shooter, remember, so you as the player will be getting a workout. 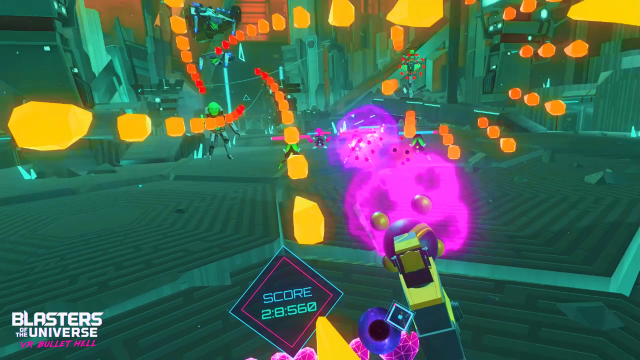 Naturally, it's best to take down the floating, flying, marching, and skittering enemies and bosses in Blasters before they can fire, but sometimes it's impossible. Then, with a screen filling with impending bullets, you need to make snap judgments. Do you raise your shield over your head and absorb the damage, weakening your shield? Or do you duck, lean, weave, and dash out of the way? In Blasters of the Universe, only your "head" takes damage, so you can dodge bullets by lowering, raising, or shifting your physical body. If you like to think of a VR game as a stationary experience, think again.

Secret Location's focus on breaking a sweat while playing its game is a refreshing change of pace. Never will you stand like a statue and shoot down incoming monsters; you'll need to be mobile or, at least, as mobile as you can be in your living room. Also refreshing is the game's huge assortment of weapon customization options. Back in the armory, players can equip dozens of parts, each with its own pros and cons. You might go for a slow-moving but explosive projectile or a spread shot with low damage. Maybe you'll opt for an add-on that poisons enemies or stick with the variant that replenishes ammo after each successful kill. Some individual mods are redundant or unhelpful, but the sheer number of possible combinations is impressive, and will surely keep you coming back for more. 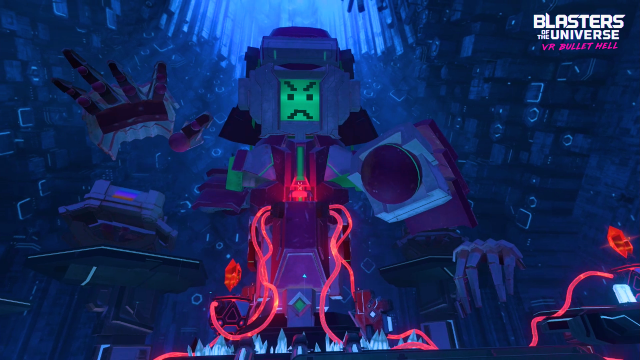 So too will "Endless" mode, a series of endurance-testing challenges; a daily challenge level with unique limits and rules; and the search for high scores. Blasters isn't shy about advertising its leaderboards, which make the prospect of replaying the game's scant four levels more attractive. Even with leaderboards, though, replay value can go only so high with a mere four levels, each of which could be beaten in under ten minutes. The game badly needs at least twice as many levels.

In terms of visuals and sound, Blasters demonstrates a colorful, tongue-in-cheek personality. Its exaggerated, neon landscapes are part Tron, part Saturday morning cartoon, and its soundtrack of driving synth music fits the tone of the game perfectly. What dialogue there is in the game is more often than not amusing. Alwyn, who functions as more a narrator and an instigator, is insecure and oblivious in the funniest ways.

The rules, mechanics, visuals, and customization options in Blasters of the Universe are good; that's why the game's short length is particularly disappointing. A sequel, with a longer running time, more stages, and more bosses would really leave a mark on the VR industry. As it stands, Blasters is a satisfactory take on a popular VR genre, elevated by the breadth of its weapon options and its physically demanding bullet hell action.

This review is based on a digital copy of Blasters of the Universe for the PS4, provided by the publisher. 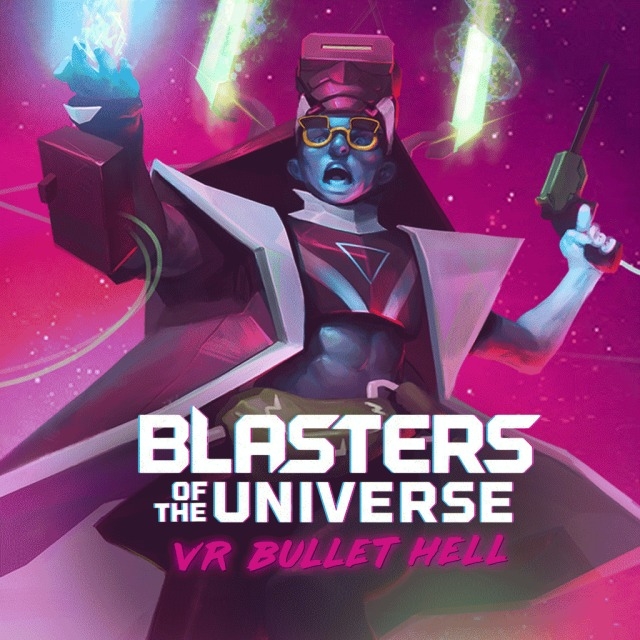 Blasters of the Universe

Blasters of the Universe