Despite an uneven third entry, the Trine series has been one of the more interesting of the last six years, providing fun physics-based platforming set against some of the medium's loveliest artwork. Now, after a small detour, Finnish developer Frozenbyte has returned to the vibrant world of Trine with a spin-off called Nine Parchments. Part Trine, part Magicka, Nine Parchments is a twin-stick co-op action game with gorgeous graphics, splendid music, and lots of replay value.

The game follows seven would-be wizards enrolled at the Astral Academy. When an explosion sends nine powerful spell parchments into the four corners of the world, the apprentices decide to track them down. It's a story that's light, lean, and disappointingly anticlimactic, but it gets the job done. 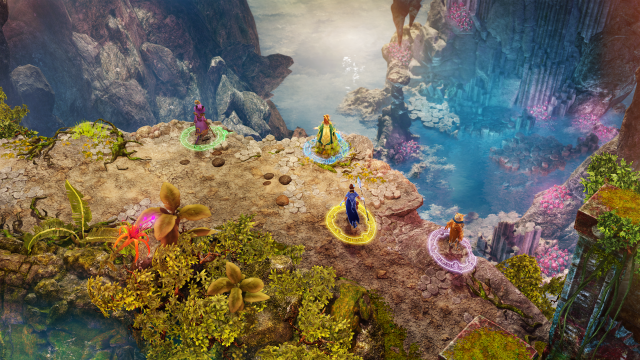 Much more important is Nine Parchment's gameplay, and here Frozenbyte delivers the goods. The game functions like a twin-stick shooter, with the left stick moving each character and the right stick rotating a dial around him or her. Thus, players can navigate their heroes around the map while firing off spells in 360 degrees. Each amateur wizard begins the game with three elemental spells but will soon earn more. When these spells — which include fire, ice, death, and lightning magic, among others — combine with the game's huge roster of monsters, many of which have their own elemental weaknesses and shields, the results are terrific.

The game boasts an outstanding push-and-pull between hero and monsters, with new enemy types introduced consistently through the adventure. A fire spell will melt an ice-based monster quickly, but won't do anything to that flaming boar bearing down on you. Nor will it damage the infantry hiding in the fire shield being projected by a giant beast. Players will need to swap spells on the fly to take down the game's monsters, managing their mana bars, and mixing in melee attacks and a teleport move for good measure. There are many opportunities for improvisational combat in Nine Parchments, and they multiply when more players are added in to the mix. 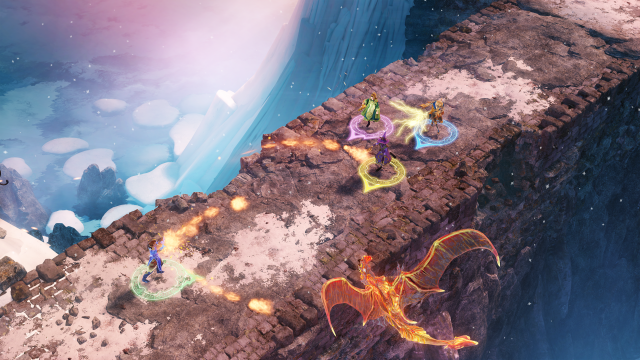 Nine Parchments can be played entirely with a single player, but it becomes that much more enjoyable with a friend or three by your side. Locally or online, Switch players can recruit a team of four to traverse the wilds and reclaim those lost parchments. Every player can pick a unique wizard, each with a pre-set list of spells, and then customize him or her with a staff and a hat. Making matters more complicated and more interesting are two features: friendly-fire, which makes careful teamwork essential; and spell combinations, where two or more players can cross the streams — to borrow a Ghostbusters expression — to create powerful magical attacks.

However, there is a big caveat to the fun of multiplayer in Nine Parchments. The game has only one save file per profile, meaning that if you commence a single player adventure and want to bring friends on board, you will need to start over from the beginning. Your gear and character experience is saved, but your forward progress is erased. It's a counter-intuitive design quirk. Luckily, Frozenbyte promises a solution for multiple save slots in an upcoming patch. 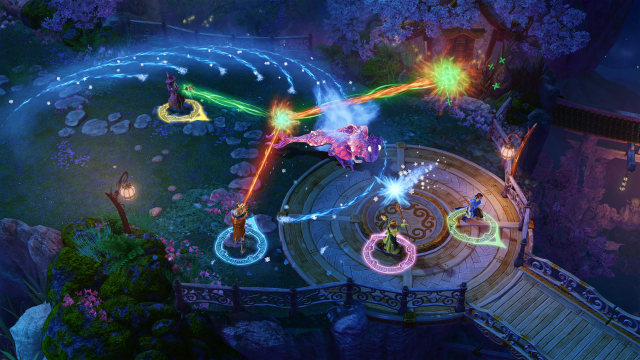 Nine Parchments is a solid experience on your first run-through, but it opens up even further upon subsequent adventures. There is so much to find and unlock, whether hats, staffs, spells, or even new characters. One of the most satisfying parts of the game is finding a statue offering a side-quest. If you have a missing character's staff in your possession, you will gain entry to an optional area of the map, where you can solve a puzzle or defeat a wave of enemies to rescue your fallen fellow student.

These opportunities are far too rare, however. While there are plenty of treasure chests and quills to find in each level, there just aren't enough chances to explore deeply. Levels are beautifully-rendered but mostly linear, cutting out caves, houses, or side paths to discover. More secret areas and more loot inside those areas would have made a good game even better. 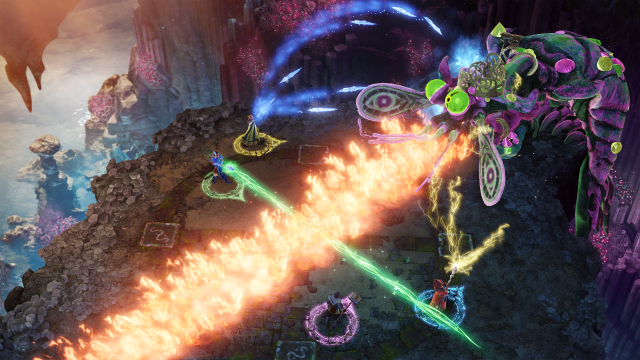 While the levels in Nine Parchments might be too straightforward, they could not be any prettier. Frozenbyte, already known for luscious production values, has outdone itself, creating environments with amazingly deep and vibrant colors. Whether it's a fiery mine or a tropical paradise, the game's artists have done it complete justice and brought it fully to life. Also great is the musical score, composed by Trine veteran Ari Pulkkinen, along with Sauli Lehtinen and Antti Martikainen.

While it doesn't bear the Trine name, Nine Parchments represents the best of that series: fun co-op action and high production values. Add in a tactical twin-stick spellcasting system and a bunch of unlockable content and you've got a recipe for success. If the game's levels were occupied with more branching paths, secret locations, and loot, it would be an even greater accomplishment. Even so, this is another solid showing from Frozenbyte.

This review is based on a digital copy of Nine Parchments for the NS, provided by the publisher.

One save to multiple saves is getting patched in coming days