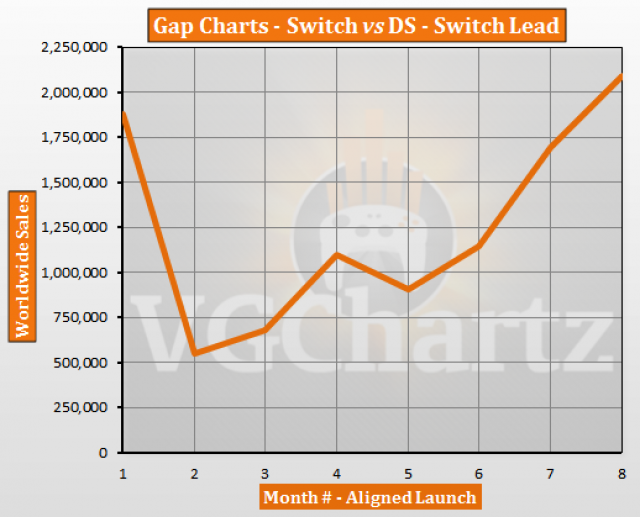 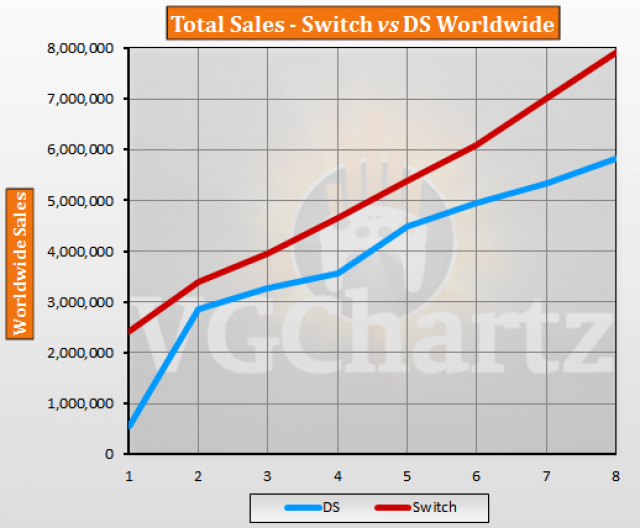 October 2017 is the 8th month that the Nintendo Switch has been available for. During the latest month the gap grew in favor of the Switch by 402,064 units when compared to the DS during the same timeframe. The Switch is currently ahead of the DS by 2.09 million units.

For a console much more expensive than the DS at launch, Switch really is doing a good job. At least it will have a decent lead until the DS redesign comes out and its sales EXPLODE.

I don't get your point here? The Switch is selling better than the DS at a much higher price point.

You honestly read all of that and missed the point? Two different machines, from totally different eras, selling at completely different prices... the variables are ridiculous.

Switch is going to outsell the DS! :->

The DS did its best work sales wise about a year or two after launching. I remember the negative reviews in 2004 before it was launched. After sales began to pickup (mainly with the DS lite) it was a different story.

Nintendogs and Brain Age...both of which eventually outsell any 3D Mario, Zelda, Splatoon, or Arms and every Mario Kart except Wii and DS.

those were on its first year ? didnt know that but yeah, those games where huge. Not possible to repeath again though with smartphones certainly taking that spot

in the beginning DS hasnt had quite good numbers. So nobody should be surprised Switch is outselling DS at the moment. But in the long term DS will win this for sure - at some point DS just has destroyed everything. Just thinking about Japan usual 150k+ weeks^^ Still I am excited to keep on following this gap-chart.

Awesome to see this! Switch may be Nintendo's biggest system!

The Switch is doing well, but for the comments above/below here are the numbers for consoles at their 8 month sales period.

If anything it proves that Year 1 sales don't make or break hardware. New pricing, new skus, and promotions can change things drastically (as it did with all the last-gen hardware especially after the recession died down).

PSV should have been dead last, but beat Wii U. Wii U should have been slightly behind PSP based on the logic some of you are using on these charts. XBO shouldn't be losing to PS3 / 360 / PSP. 3DS should have went on to sell almost as much as the DS. PS4 should be obliterating the original DS and Wii should be the best selling console of all time.

PS4, XBO, Switch, and even Wii U had some of the best console launches of all time thanks to gaming early adoption growing among consumers due to the success of last-gen consoles. If anything Switch is proving to be on pace to match 3DS + Wii U global sales, which is good enough. It still has a few years to go before we can say where it'll. By it's 3rd full year we'll have a range of what to expect from Switch, and I'm expecting it to land around the PSP / X360 / PS3 range lifetime.