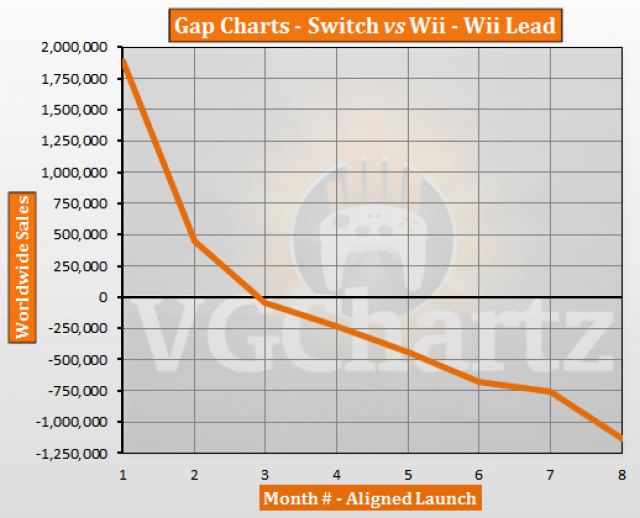 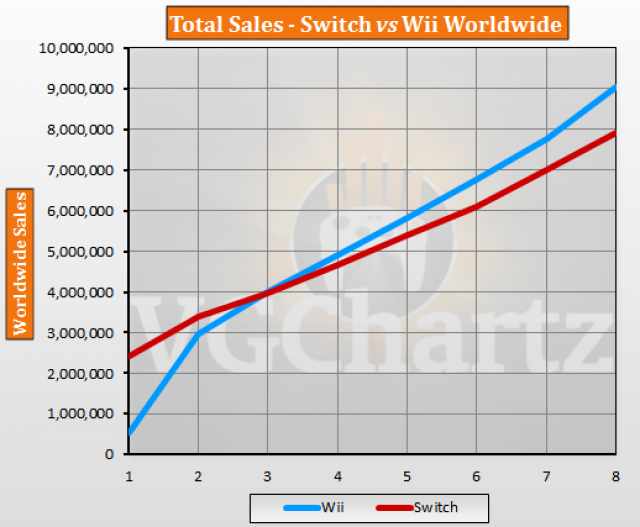 October 2017 is the 8th month that the Nintendo Switch has been available for. During the latest month the gap grew in favor of the Wii by 377,205 million units. The Wii is currently ahead of the Switch by 1.13 million units.

Pokemon will determine how high the Switch can go..

Holidays are coming for the Switch, so it should manage to close the gap in the next few months.

As mentioned it will be great to see these figures again after the Switch has had its holiday season. I really don’t see the Switch getting close to the Wii numbers any time soon, however. I can remember when WiiFit came out and the casual world went mad. Wii was moving an unbelievable amount of consoles in its second year.

switch can close a the gap, but i dont see wii losing this battle, wii out stock for mare than a year, and switch stock is ok now, and switch sales in EU is far from wii.

Switch put up a valiant fight, but those casual numbers were intense.

The Wii didn't get Pokemon though. That is one game that could push the Switch ahead.

The Switch hasn't gotten Pokemon yet, either. Don't count chickens before they hatch.

But it will eventually. And when it's gonna come out, it is going to increase hardware sales exponentially.

That doesn't have much weight in the context of Switch vs Wii right now, though.

Why? I said "it could". I'm simply expanding on the idea the idea that the Switch might get "those casual numbers".

Fair enough, but it'll have to be a significant push from a single pair of games to close the growing gap.

Yeah, let's completley ignore the ridiculous stock shortcomings that Switch had and the fact that still didn't had a holiday season just in case we discover we are in front a very similar level of success and someone faint.

Probably not as big ad Switch, and most important: Wii had a holiday season, Switch no.

"Probably" sounds like you're reaching pretty hard. Switch has been readily available in over 80% of the stores I work in for a national chain, and not just a few units either. Most stores have over a dozen in stock. You know how long it took the Wii to reach that point? Roughly 15 months.

"You are reaching pretty hard" says the guy that keeps actively ignoring such an important fact as the Holiday season that Wii had and Switch didn't.

I'm aware. Guess what? Wii suffered ridiculous stock shortages for nearly a year and a half after launch.

@goodnightmoon, you are talkin about US sales, and you forgot the rest, this is mundial sales, and switch in EU is not saling like wii did, you cant see stock problem in many EU countries.

The casual's are upgrading to the switch and passed on the wii U. i expect the switch to hit same numbers as wii relatively except for some who quit gaming. my buddy got a wii and a switch as his only 2 systems. he hardly touches the switch. but its a thing.