Cats are going missing, adults are behaving strangely, and a group of super heroes have split into two rivalling factions.  In a city rife with chaos, you must battle against the homeless, crooked police, and sixth graders, among others, as you attempt to unravel the mystery of what’s behind all of this, and settle the problems, past, present, and future.  This is South Park: The Fractured But Whole. 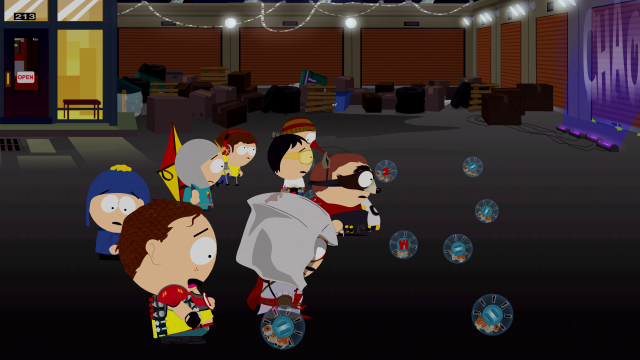 Following up on the success of South Park: The Stick of Truth, Ubisoft kept development in house this time around.  Stepping in for Obsidian Entertainment, Ubisoft San Francisco has proven it's up to challenge, by providing approximately 20 hours of outrageous South Park content wrapped up in a respectable RPG experience.
You again play the role of the “New Kid”.  There's a limited selection of customization options, but there are options to suit both genders.  There’s also a funny, yet poignant, statement made about prejudices and bigotry with the difficulty slider.  In the game, an increase in difficulty goes hand in hand with having a darker complexion.  Cartman is fairly quick to reassure you that this increase in difficulty won’t affect combat (there’s a separate option for that), “it only affects every other aspect of your life.”  True to the series it is based on, this is but the first of many jokes of that kind.
On the audio and visual side, everything looks and sounds exactly like a television episode of South Park.  In fact, during cutscenes, it’d be difficult to tell the two apart.  Using the same voice actors from the show (most notably the show’s creators, Matt Stone and Trey Parker for the variety of voices they provide) of course does wonders for the authenticity. 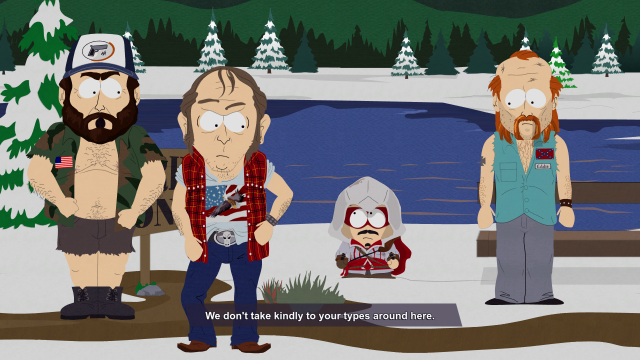 Authentic is a great way to describe not just the graphics and sound, but the presentation and experience in general.  Every facet of the game oozes with South Park charm.  From humorous, mostly useless “tips” provided during the loading screens, or the “tree fiddy” in money you can unlock as a reward from the Ubisoft Club, it’s like the game almost never breaks character.
Unfortunately, the game world – the city of South Park – isn’t much changed or enlarged from The Stick of Truth.  Its modest size pales in comparison to the expansive game worlds that many modern games, especially RPGs, often have, but it has a fair amount of content packed into it.  A notable element is the Metroidvania-esque manner of exploring, where you gain new powers (via the friends/allies you make) that allow you to access new areas, often to find useful items.
The game features a fairly basic and straight forward crafting system, as well as a unique leveling system that unlocks new “artifact” slots upon reaching certain levels.  There are three different types of slots, and you can find or craft a variety of artifacts, each with unique strengths.  Crafting items will increase your crafting level, unlocking more and better crafting options, which is particularly important for the artifacts. 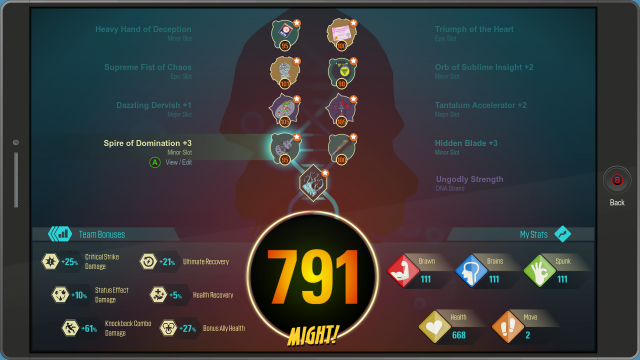 A stronger and more distinguished feature is the turned-based combat system that now takes place on a grid.  With movement and attacks limited to certain areas of the grid, and even some dynamic battle stages, it provides challenging but rewarding opportunities to employ strategy during combat.  At least a few times, the goal during combat was to move through the grid, or to try to position enemies in a certain location on the grid, rather than defeat them in the more traditional manner.
There are timing based/QTE opportunities to inflict extra damage, or recover health and build up your power meter to be able to use a character’s special ability.  It’s all an enjoyable take to simpler turned-based combat.  With 12 class options that you can mix and match attacks from for your character, along with more than a dozen ally characters with which you can compose your team, it’s a deep and engaging battle system.
Though the combat system is noteworthy, by far the strongest, most distinguished, and divisive aspect of the game is the narrative.  In this regard, The Fractured But Whole is South Park through and through - replete with bizarre, satirical, sophomoric, crude, and/or (potentially) controversial humor and content. 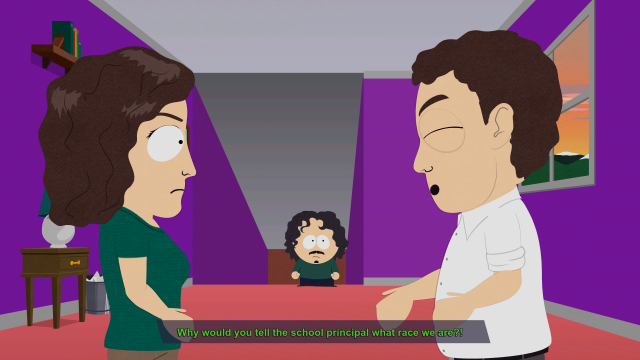 South Park has always been known for testing sensibilities, but this may be the most scandalous production in the South Park universe yet.  With the deftness you’d expect from South Park, this game contains subject matter such as showing and explaining the reason behind police misconduct towards blacks (at least in the town of South Park) and sexually suggestive exchanges between children and adults.  It seems as though the writers really embraced the (inevitable) Mature rating, and perhaps tried to push the boundaries for even it.
Really, that’s what most people tend to love, or hate, about South Park.  I definitely fall into the former group.  There were times when some of the humor managed to make even me feel uncomfortable, but so much more of it simply had me laughing!  It's steeped with pop-culture and topical jokes and references, making it the funniest game I’ve ever played.  There were moments when my wife or kids were around, and the game had them laughing out loud too.  I can honestly say that it was fun for the whole family!
Better yet, aside from (usually) being side-splittingly funny, the story actually has some nice intrigue, and even a few good twists.  It teases you with some mysteries that I was eager to get to the bottom of, but of course never gets too serious.  Although it seems pretty linear, there are some fun choices to make, but also at least one or two that really gave me pause.  Overall, it’s an over-the-top, funny, and satisfying tale that works, but only because it’s South Park. 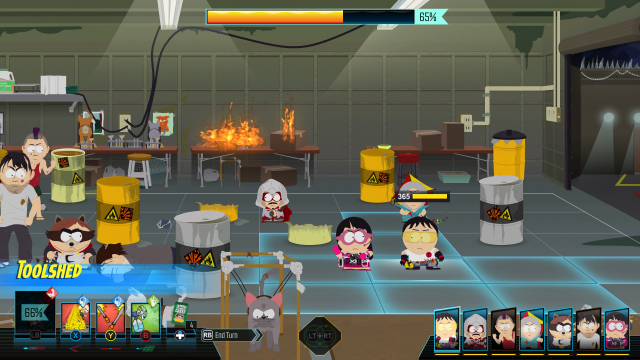 
This review is based on a digital copy of South Park: The Fractured But Whole for the XOne, provided by the publisher.

Linear experience should not be a negative if the game was designed to be experienced as such.Just my two cents.

I agree with you. However, the linear experience affects replayability. Between that and the modest length (and its full price), I think it was worth noting, and that most would not see that as a positive attribute, even if it's that way by design. It's not my strong suit, but I have to keep the pros and cons short and sweet, and that's the phrasing I went with. And now thanks to you, I'm wondering if that was a good decision. :-)

Even then, I dont agree with you that replayability should be a factor where a game is going for a strong story and/or narrative, because these types of games arent going to have good replayability by nature.Maybe its something personal, but people put too much faith in replayability into something that dosent go for it(in contrast for games that needs it, like multiplayer games for instance)

Replayability and its value are subjective. By mentioning it, it's there for potential buyers to consider. It doesn't make or break a game in my opinion, but it might affect whether or not someone rents or buys, or perhaps wait for a sale/price drop. That's really the angle I'm seeing it from, and why I felt it should be mentioned.

I wish there were some sign of significant non-linearity, because it would give me an excuse to put more time into it and see where different choices might take me, and what ridiculous humor it might reveal.

For South Park-Fans a dream, i think :) Story, Graphic, Gameplay & the PS4-Cover looks good. I wish, Anime-Games ala Dragon Ball Z or One Piece in this Game-stil, because i like rpgs with great story & the same "graphic-stil" like the original series/anime, Naruto Ultimate Ninja Storm 4 is a good examlpe, but its a fighting-game, not a rpg. Have fun with South Park guys : D

Nice review. Curious to see how the difficulty slider impacts "everything else". :)

Linear experience should not be a negative if the game was designed to be experienced as such.Just my two cents.