Oh, Fortnite. Shall I compare thee to a free-to-play? Thou art more lovely and more temperate. Rough traps do shake the zombie hordes away, and bullets are in all too short supply.

Fortnite is the latest from acclaimed developer Epic Games, which brought unto the world some of the best shooters ever made, including Unreal Tournament and Gears of War. Its latest, like so many of the last ten years, is a zombie game. Although Fortnite borrows ideas and progression models from other, popular games — notably Minecraft and Left 4 Dead — it embraces a few peculiarities that make it stand out, in both good and bad ways. 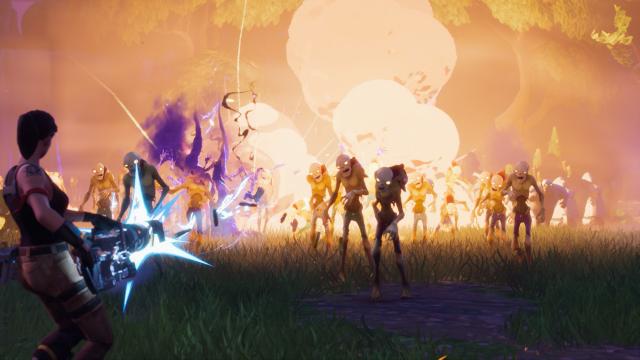 Upon booting up Fortnite, players are introduced to a world on the edge of collapse. A giant, purple, swirling storm arrived and took with it 98% of humanity. Then came "husks," zombified humans whose flesh hangs off their exposed skulls. The remaining humans banded together to survive the storm, erecting barricades and crafting bullets to protect against waves of mindless husks.

Setting Fortnite apart from its zombie horde contemporaries are its crafting and building components. Upon entering a mission map — Fornite does not offer a contiguous open-world survival experience, unfortunately — a team of up to four players will need to scavenge the area for resources, build up fortifications around a point of interest, and then endure waves of angry husks. 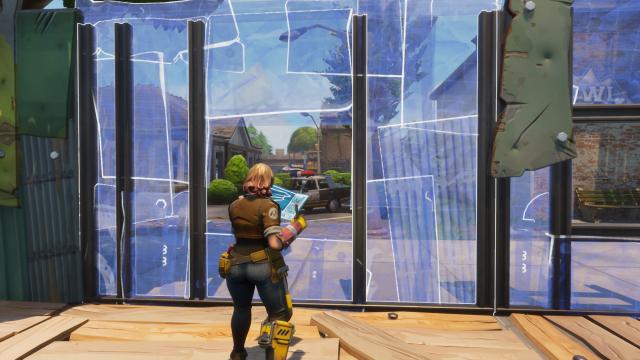 Mechanically, this all works extremely well. Using a pickaxe, players can break down almost anything — trees, rocks, houses, cars — into component parts, which are used to craft traps (essential for solo players), bullets, weapons, and forts. Building forts is preposterously easy, thanks to Epic Games' intuitive and hassle-free construction tool. Pressing B will bring up a construction menu, in which players can craft walls, floors, and stairs out of three different building materials. Holding B in the construction menu will allow players to edit each wall. A door can be punched into a wall in a matter of seconds.

Shooting is similarly satisfying. Players can carry a number of offensive weapons, including assault rifles, pistols, shotguns, RPGs, katanas, and baseball bats. Each weapon feels different, with a unique weight and kickback. 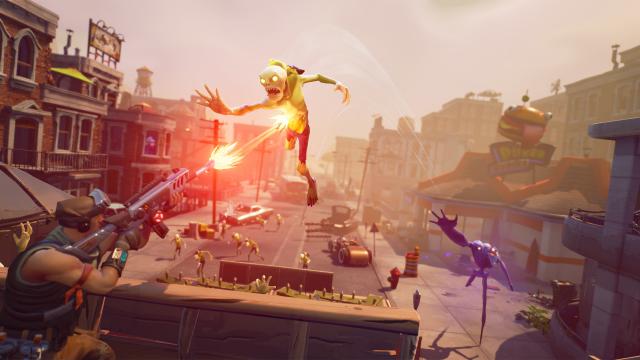 Fortnite's mechanically-sound gameplay is matched with some terrific presentation. The game has a vibrant, ghoulish, slightly-cartoonish visual style that's part Disney, part Walking Dead. Husks, with their hanging flesh "hoodies," are particularly memorable. Animations and audio work are also impressive. The one big exception is the user interface, which is cluttered, awkward, and disorienting. It's difficult to navigate, especially on consoles, and noisy with unnecessary text, tabs, and menus.

So, if Fortnite plays well and looks great, what's the problem? The short answer is its modus operandi: free-to-play. Although the game isn't technically free-to-play — it's currently in early access with a base price point of $39.99, with plans to go free-to-play sometime next year — it conforms consistently to the controversial model. That translates to a lot of grinding, unless you're willing to spend real-world money. It's not uncommon for players to spend the majority of each mission scrounging for resources to craft bullets — which are consumed at breakneck speed — traps, and weapons, which degrade upon use. 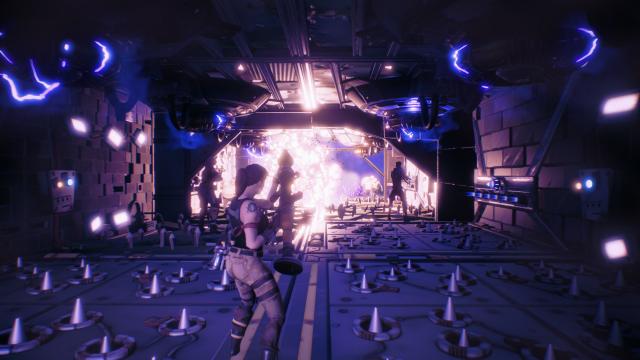 Fortnite does throw an obscene amount of loot at its players, in the form of blueprints, survivors, currency, chests, and pinatas, but much of it is insignificant. This constant flood of materials is designed, ostensibly, to activate those dopamine transmitters in the brain. Yet so many of the materials are incomprehensible or insignificant. Attentive players will learn to recycle them immediately in order to solidify the few worthwhile items in their inventories.

In the end, it's up to players to decide whether to spend hours playing the game for loot drops that may prove to be useless or to fork over actual dollars to hasten the process. In either case, it's not much fun. 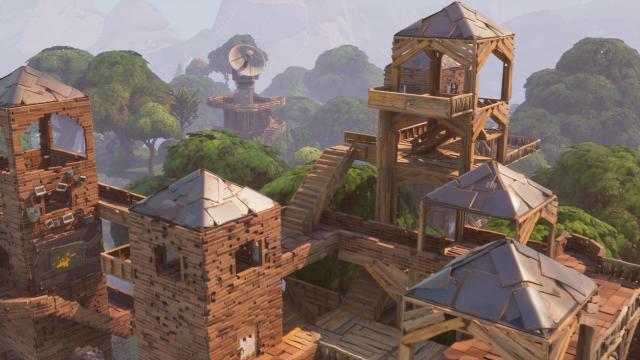 Like so many games of this generation, Fortnite is frustratingly good and avoidably bad. Its good parts — presentation, shooting mechanics, building tools — are frustrating because they're set atop a foundation focused on easily-avoidable design flaws: repetition, grinding, and pay-to-continue content. There's a great game in Fortnite, buried somewhere under its busy UI and free-to-play economy.

This review is based on a digital copy of Fortnite for the XOne, provided by the publisher.

Played this for week, actually enjoyed it but didn't hold my interest.