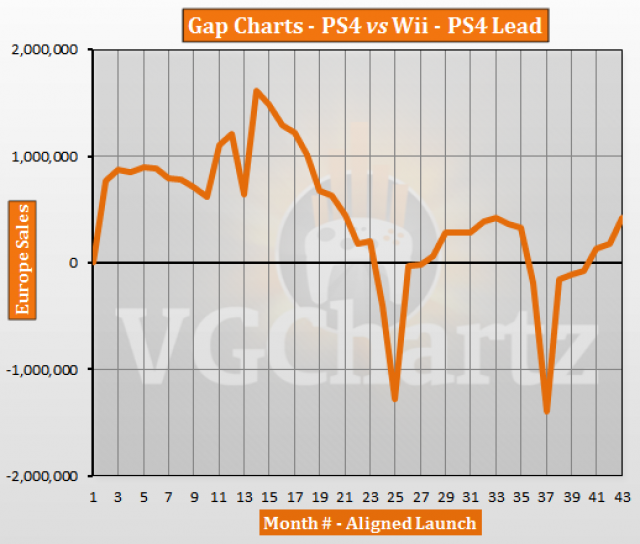 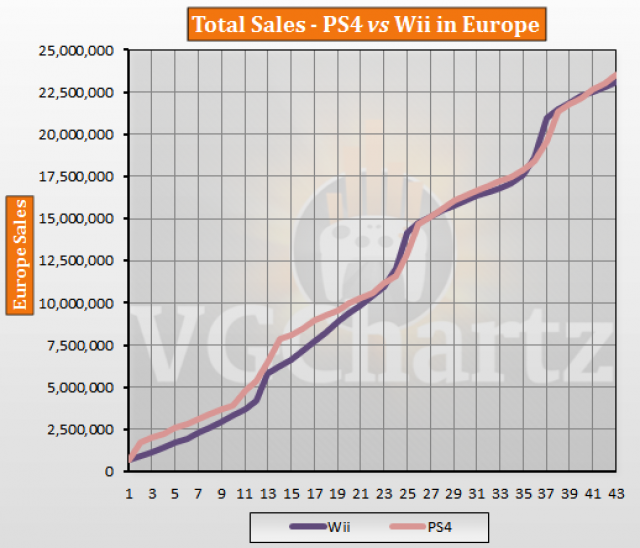 Wii was really killing it in the first 4 years.

Still crazy to me Europe has a larger market than North America, I guess I just grew up under the assumption that NA had the larger market

Combined thw US market is bigger than the European it's just Playstation that sells more in Europe. But PS+Xone is bigger in NA than in Europe.

Ah, true. I forgot to factor that in that Xbox doesn't sell as much in EU like they do in NA. You're right

Nintendo sells more in NA than they do in Europe too. Europe is only a bigger market for Sony. That's why they call it Sonyland afterall :P

Surprised Wii held on for so long in Europe; it's expected for PS to do best there.

Not surprising at all. The Wii was selling to Nintendo fans, but almost a blue ocean casual market of mom/grandparents/ and other non-traditional gamers that core gamer sales no longer mattered.

The PS4 being a predominantly core console that would never reach that same blue ocean audience and tracking ahead of the Wii is a HUGELY impressive feat, especially considering it has been a neck and neck battle the entire time.

Most gamers expect the PS4 to outsell the Wii in the long run since the Wii had 4 strong years than tanked hard, meanwhile the PS4 should have continued success for the next 3 years in sales. But to be neck and neck with it the entire time is a feat regardless of the region.

Dude, you are aware that the PS1 outsold the Wii over there, right? Even the PS3 outsold Wii over there. It's freaking Sony land at EU! That blue ocean market was the only reason Wii got anywhere close to Sony consoles...

So no, it is not impressive for PS4 to struggle with Wii there.

It took the PS3 2 years to surpass the Wii's sales until after the Wii was no longer selling by it's 6th year.

The PS4 has averaged over 6m consoles per year in EU which is impressive. But so was the Wii, which had a single year where it was over 8m (which is why this is neck and neck), before falling down to an average of 5m.

Sonyland or not the Wii went on to sell almost 34m units and is ranked 6th in overall sales for the region. Any console breaking that mark is a huge success, and the PS4 will break that mark by the end of this year, and go on to exceed it.

PS2 had no competition from Xbox or GC.

NDS was the best selling handheld of all time.

GB had no competition and was a fresh idea.

PS1 had no competition from N64.

PS3 sold for another 2 years of successful sales, while Wii sales had finished.

Regardless Wii was one of the fastest selling consoles in EU even if it ended up in 6th place overall.

Ps4 is a monster in europe!