In its short time on the market, the Nintendo Switch has become something of a local co-op destination. The system itself comes packed with two controllers and its first party games, from Snipperclips to Mario Kart 8 Deluxe, are built with friends in mind. Third-party developers are also getting in on the fun. That includes SMG Studio, which has brought its devilish puzzler Death Squared to Nintendo's latest console. It supports up to four players locally, across dozens of deadly brain-teasers.

Death Squared features two modes: an 80-level campaign that can be played solo or with a friend; and a two-to-four player party mode with 40 levels. In both modes players will guide colored blocks across maps replete with traps and hazards in order to reach the goal. Communication is a must during co-op adventures as even the slightest movement can trigger lasers and pull pieces of flooring out from under partner blocks. 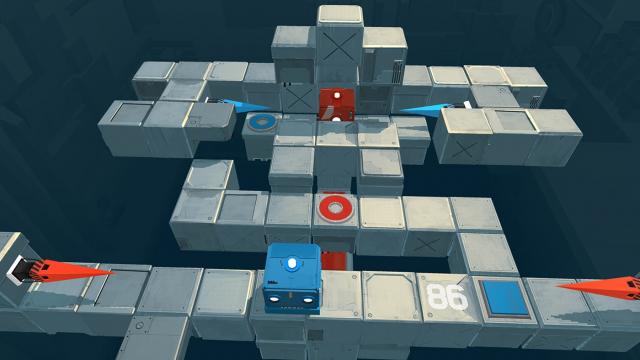 Strangely, playing the campaign solo, or in "lonely co-op mode" as SMG calls it, is actually more enjoyable (and challenging) than playing with a friend along for the ride. A single player controls a block with each stick, creating an initially-awkward sensation similar to patting your head and rubbing your belly simultaneously. That wears off quickly, though, and then the puzzle-solving process becomes second nature.

That's not to say the puzzles are push-overs in any way. Many of them are tricky, misleading, and downright nasty. You and your co-op partner will die a lot. SMG even included a handy death counter in the top right of the screen to remind you constantly of your failures. What makes the environmental puzzles in Death Squared particularly dangerous is that players will alter the game board simply by moving toward the goal. Lasers will follow certain blocks, zapping partner blocks out of existence in the process. Floor panels will release floor spikes. And so on. 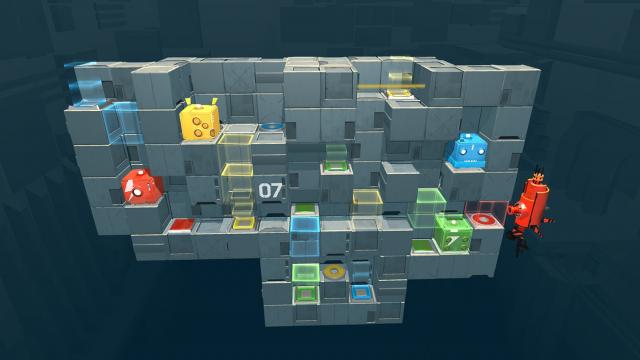 Thankfully, the puzzles never feel broken or unfair. With enough practice, patience, and pulverized protons, a duo of players will be able to master all 80 mind-benders. Along the way, they'll offer each other advice, exchange playful barbs, and threaten one another with bodily harm. Death Squared is the kind of game that's great for beginners but bad for relationships.

The same holds doubly true for the game's party mode, in which four players each control a block, either red, green, yellow, or blue. This is perhaps Death Squared's finest mode, as a lot of the tension in the campaign evaporates into hilarious hijinks and team kills. At times in the campaign, a new map can feel more like homework than a new adventure. In party mode, however, each map is a new excuse to laugh uncontrollably and push each other off the map into the abyss. Replay value is relatively low once each puzzle's solution is revealed, though. 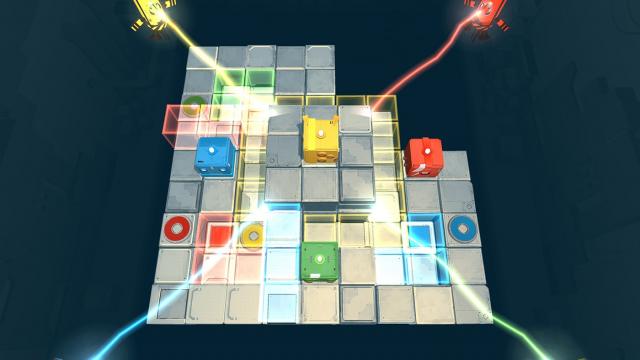 By completing all of the base challenges, players can unlock some special, extra-tough "vault" missions, including seven exclusive to Switch. The vault is a welcome bonus for those daring and patient enough to survive all of SMG's riddles.

The amount of enjoyment you'll find in Death Squared relies on several things: your interest in puzzles, your dexterity and ability to think laterally, and the number of friends you can call over to share the experience. There are 80 levels to be played solo here — most if not all of them more challenging as a solo venture  — but it's only with a group of friends that you'll extract everything Death Squared has to offer.

This review is based on a digital copy of Death Squared for the NS, provided by the publisher.

Sounds fun. Gotta find some friends to play with.