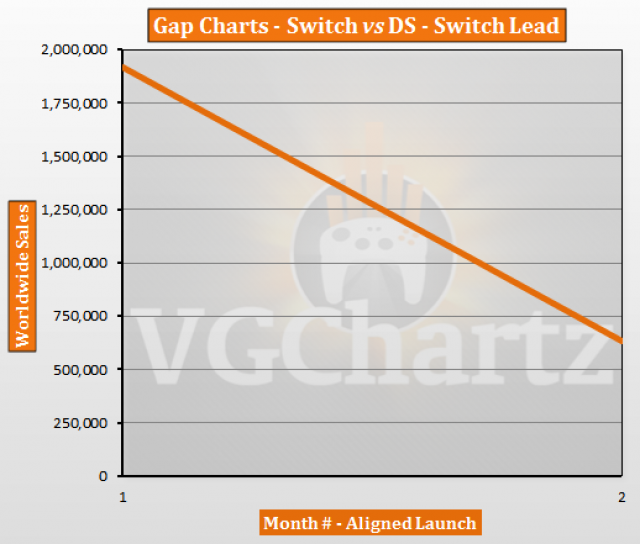 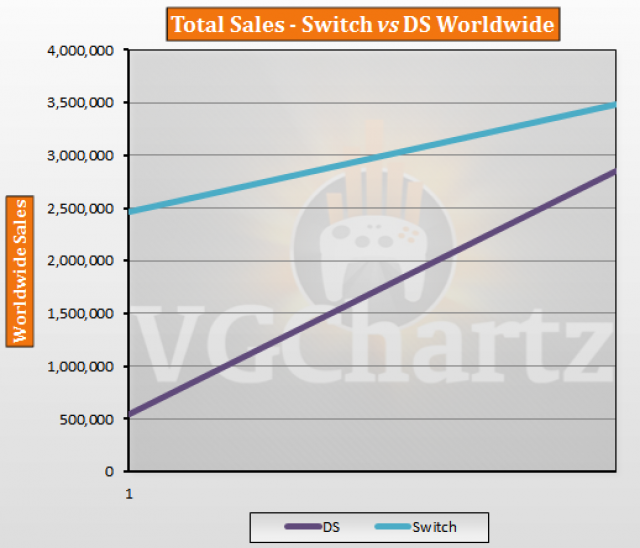 April 2017 is the 2nd month that the Nintendo Switch has been available for. During the latest month the gap grew in favor of the DS by 1.28 million units. After two months the Switch is currently ahead of the DS by 631,494 units.

The current plans for Switch VGChartz Gap Charts include comparing it with Wii, DS, X1, PS4, 3DS, and Wii U. Anyone have suggestions for other Gap Charts?

We had Wii now DS, you might as well compare it with PS2

@Kristof81
There's no data on here of the PS2 to compare to though.

I think on the long run, the only comparisions worth keeping will be PS4, 3DS, Wii and with reservations DS (DS will most probably slaughter the Switch). Wii U is already getting slaughtered and the X1 will soon loose contact.
A PS360 comparision like the one with against the PS4 might be another idea, but the outcome will probably be the same

Wii U + 3DS? I think it's at least a relevant comparison, given that the Switch seems to be the successor to both.

I think NS vs each Wii, WiiU, DS, 3DS, XB1, and PS4 sound fun and interesting. NS vs WiiU+3DS combined also sounds good.
:D
BTW, Thank You for doing these Gap Chartz. I have been enjoying these in silent for years.
:)

I think NS vs each Wii, WiiU, DS, 3DS, XB1, and PS4 sound fun and interesting. NS vs WiiU+3DS combined also sounds good.
:D
BTW, Thank You for doing these Gap Chartz. I have been enjoying these in silent for years.
:)

we all know this is going to be a massacre in the DS's favour in the long run.... oh gosh...

I doubt we'll ever see DS's or PS2 figures of any console in our lifetime.

Lots of pessimism here! I think Switch cvan stay very close to DS, and in fact it should pull away this Christmas time as DS hits the first spring lull. Tho, yes, it is a long shot for Switch to beat DS lifetime.

I can see Swtich hitting 100M to edge out the Wii. But that's the only mega milestone I see it passing, PS2 and DS are untouchable.

Even if the Switch does well, it's going to be a landslide in favour of the DS. That thing was a beast.

Is this fully aligned sales, or does it not align for the separate regional launches of the DS?

If it's the former... how come DS' first week was so poor? If it's the latter as soon as we get to the other launches of the DS I think this is going to look very one sided!

Lol, it's funny that this was downvoted. I think it's a perfectly relevant question.

Switch is DS numbers or higher. The only thing keeping it from those numbers right now is stock.