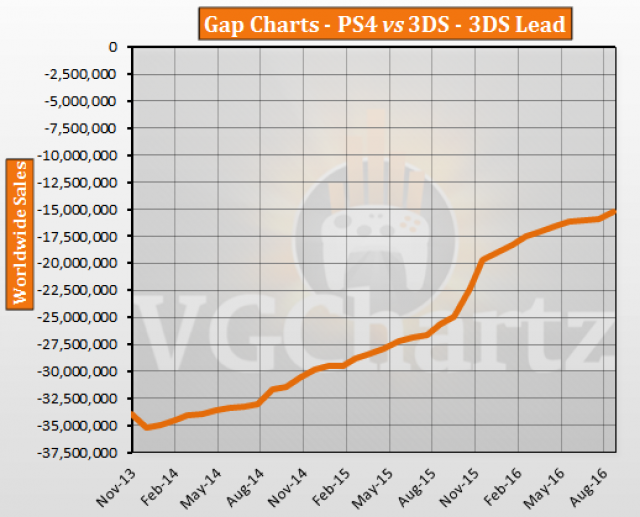 Why is this not aligned launches? The 3DS came out 2 1/2 years before the PS4 did. Of course it's going to be in the lead. PS4 is going to easily outsell it by at least 40 million LT.

According to this site, 3DS was just over 40 million at the end of 2013 which would be about 2 years & 9 months after launch. PS4 is up by around 5 million it seems.

Assuming that this sites numbers are fairly accurate.

Because it's not a chart showing aligned launch? This is a GAP chart, showing the current gap between two or more platforms.

If you would like an Aligned Chart, just ask. William/Trunks is pretty accommodating when it comes to Chart requests (he published my request for PS4 vs PS3+360, after all, and it even became a monthly thing with the rest of the charts).

Why is this not aligned launches? The 3DS came out 2 1/2 years before the PS4 did. Of course it's going to be in the lead. PS4 is going to easily outsell it by at least 40 million LT.