When Two Tribes announced RIVE would be the Dutch gaming company's final game, the studio made a bold promise: RIVE will be the best Two Tribes game ever. Spoiler alert: it is. RIVE is a brilliant shooter-platformer hybrid that celebrates the design philosophy – and difficulty level – of the arcade and console classics of yesteryear. Not only is it Two Tribes' finest work, it's one of the best games of its kind.

In RIVE, players control space scavenger Roughshot, whose spacecraft doubles as both fighter jet and tank. Trapped on a huge, mysterious starship, Roughshot spends much of the game attempting to escape. When outside the mighty vessel, Roughshot flies his ship in a style comparable to Gradius or R-Type. When inside, the ship operates much like the tank in Blaster Master. 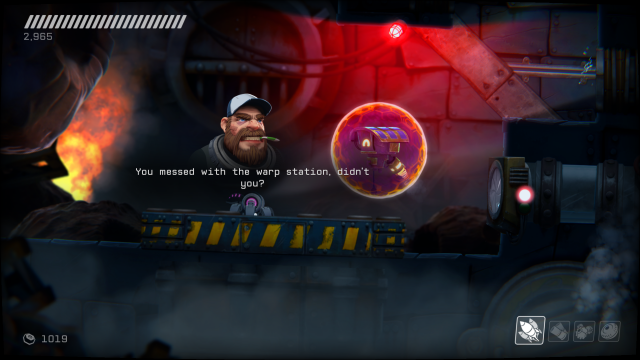 RIVE is an amalgam of genres and concepts that date back to the first time the Vic Viper flew among the stars. It borrows mechanics not only from Gradius, R-Type, and Blaster Master, but also Star Fox, Bangai-O, Tyrian, and Metroid, to name a few. Yet the game is much more than the sum of its parts. Two Tribes has built in RIVE a unique hybrid that satisfies demands for exploration, problem-solving, platforming, and fast-paced arcade shooting.

The mixture of these elements makes RIVE absurdly fun and addictive, but also insanely difficult. Imagine outrunning and outjumping a rising lava flow through a vertical chamber. Sounds stressful, right? Now imagine doing that while shooting down waves of enemy robots in 360 degrees. 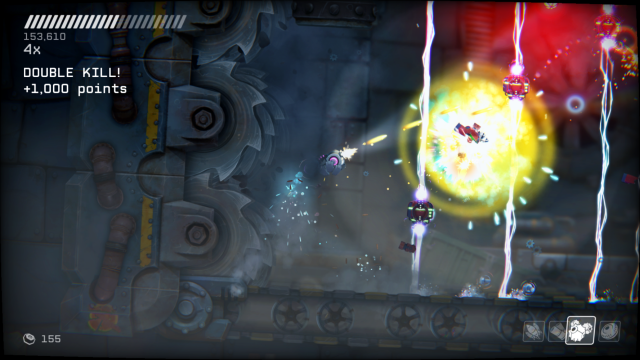 The developers at Two Tribes love throwing in curveballs like this throughout the game. At one point, Roughshot is fighting a shielded robot while he bobs up and down in water. Then waves of "kamikaze" bots show up. Then a giant rotating saw blade cuts through the water back and forth. Then several electrified lasers sweep across the room. By the end Roughshot is bobbing and weaving, trying to avoid contact with the saw and lasers, all the while hoping to land a few shots on his targets.

This is what Two Tribes describes as RIVE's "dance of destruction." When it's at its best, there is a certain rhythm to the combat in RIVE – a brutally-challenging and physically-demanding rhythm, but a rhythm nonetheless. As a result, some players might find the game unfairly difficult. At least Two Tribes is upfront about the game's mission to slice, dice, shred, fry, burn, and crush its players. The game's default setting is "hard mode." Only after repeatedly failing a section will the game offer the embarrassingly-named "soft mode." 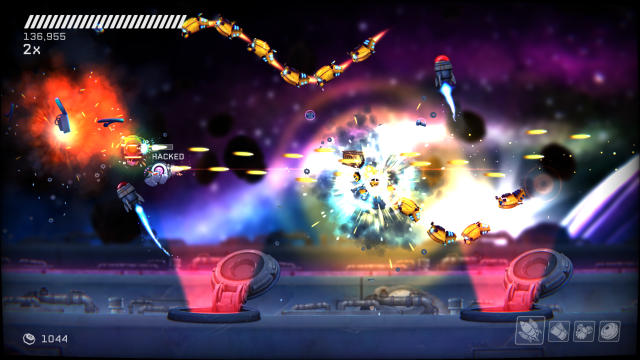 In order to mitigate the game's extreme level of difficulty, Two Tribes instituted a generous checkpoint system. Before, after, and even sometimes during hectic firefights, the game will save player progress. This makes what could be a frustrating experience more forgiving, although at times the game reloads you in a compromising situation, like above a lava pit with no platforms. Not a fan of checkpoints? Don't fret, old-school gamer. Beating the game unlocks "speedrun" and single-credit" modes for the masochist in you.

RIVE is a relatively short game – four to six hours long – but it's absolutely packed with clever ideas and interesting scenarios. In a way, it's reminiscent of Super Mario Galaxy 2, in which individual stages contained more ideas than entire games. Similarly, RIVE burns through ideas, hooks, tools, and mechanics at a prodigious rate. It's a twin-stick shooter. Then it's a scrolling horizontal shooter with a fixed forward cannon. Then it's a scrolling vertical shooter. Then the game takes your weapons away entirely and asks you to solve problems to advance. 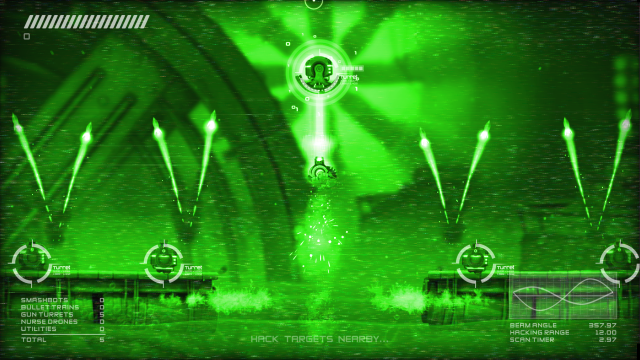 The greatest mechanic, though, is hacking. By finding hack capsules – or viruses as the ship's steward calls them – Roughshot can scan enemy robots and turn them friendly. Gun turrets become faithful sidekicks; nurse drones revive lost health; and smashbots, well, smash things for you. Also impressive is RIVE's take on Metroidvanias in the layout of the ship. Although each mission is self-contained, all areas are connected. There are also upgrades to buy and secret rooms to discover.

RIVE is a game easy to overlook. It's a 2D shooter-platformer with an unremarkable name from a small studio quitting the industry. Yet this is a title not to be missed. It's a short game, yes, but different modes, online leaderboards, and addictive gameplay will bring players back again and again. Each mission is stuffed with enough engaging mechanics to fill a complete game, and the harsh difficulty makes victory that much more rewarding. Two Tribes promised RIVE would be their last and best game. It's certainly the best. Let's hope it won't be the last.

This review is based on a digital copy of RIVE for the PS4, provided by the publisher.

Punishing difficulty isn't a negative unless it's not fun. This game looks like it's quite fun.