I chose 1977 as a starting point since it corresponds with the release of the Atari VCS (or 2600 as it was re-branded years later). The Atari 2600 was, to borrow from IGN, "the console that our entire industry is built upon." It essentially created the home video game market, pulling consumers away from arcades and into the living room. Although Magnavox and Fairchild had broken ground earlier in the decade, it was the 2600 that became the dominant force in the market, with parent Atari becoming synonymous with video games by the early 1980s.

Here are a couple housekeeping notes before we continue: all games are based on North American release dates, and ports are ineligible. 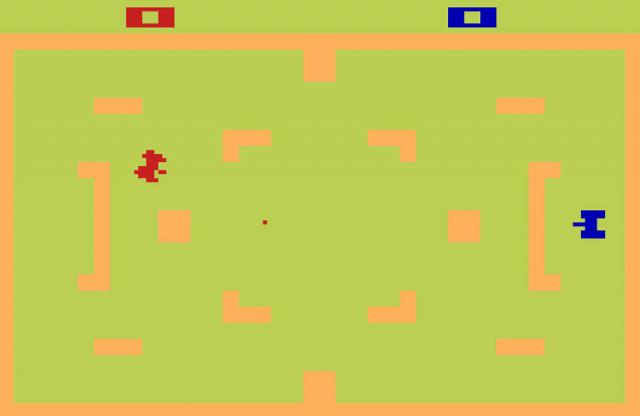 Atari 2600 launched with nine games in 1977, none finer than Combat. Featuring crisp color graphics and 27 game modes, Combat was one of the more interesting early Atari titles. Although the game included modes with jet fighters and biplanes, it was the tank modes that stole the show. In these modes, two players could battle it out across a number of mazes and according to several different variations, including guided missiles, invisible tanks, and, best of all, tank pong, in which shots bounce off walls. 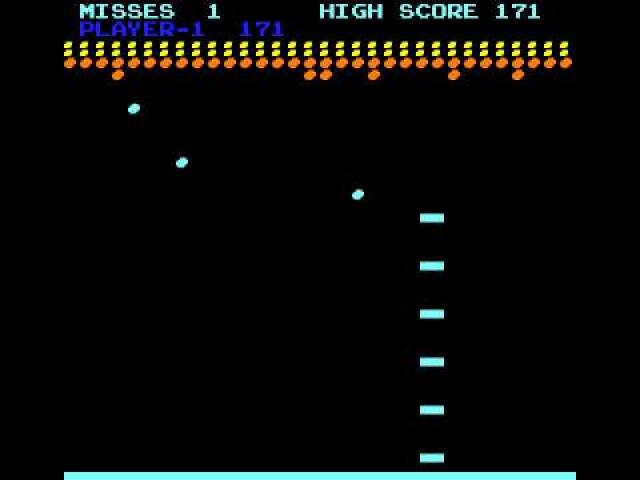 The arcade game Avalanche is hardly a household name, although some folks might remember its unauthorized adaptation Kaboom!, developed by Activision and released in 1981. In Avalanche, players are required to catch falling rocks with a set of paddles. As each row of rocks is cleared, the set of paddles decreases in number and in size. The concept behind Avalanche is simple, but it's surprisingly fun and addictive. 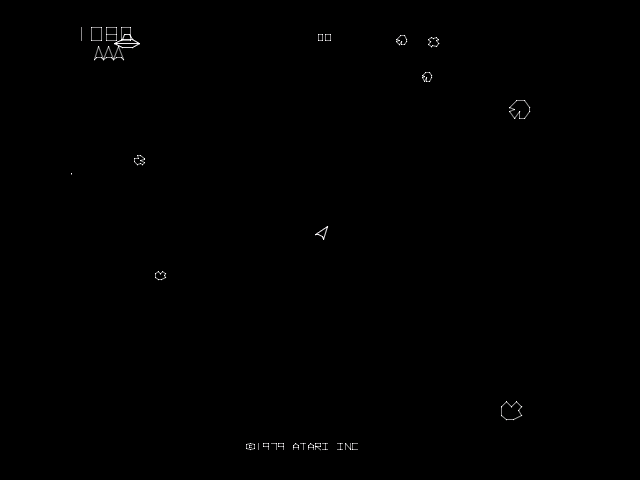 Unlike Atari's Avalanche, Asteroids was a hit of epic proportions. It replaced Space Invaders as the most popular arcade cabinet in the U.S., and became Atari's best-selling unit of all time. With its clean vector graphics, iconic sound design, and accessible gameplay, Asteroids helped usher in a golden age of arcade games. The game is immediately understandable and easy to learn, but difficult to master — and thus in line with Atari's mantra of the time. 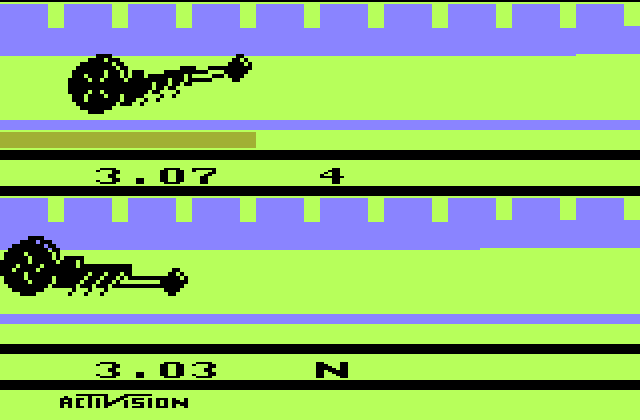 One of the more polarizing games on this list, Dragster is game that's easy to love or hate. Developed by David Crane, who went on to program Pitfall!, Dragster is perhaps the quickest video game on the planet. The object of the game is to drag race either against the clock or against another player. Each race begins in neutral gear, and players must use the Atari 2600 joystick to clutch and shift through four gears to reach the end line without blowing an engine. There is a shocking amount of strategy built into this simple and short title. 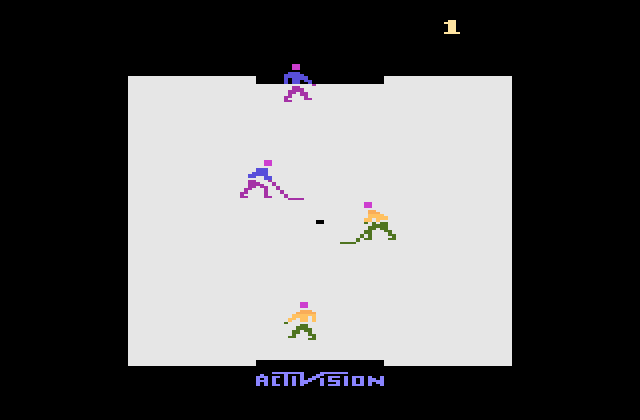 Activision was responsible for many of the most impressive games on Atari 2600, and Ice Hockey might just be its best. Developed by Alan Miller, who co-founded Activision, Ice Hockey is a simplified version of the winter sport, with only two players per team and no penalties. When the puck is under player control, it moves left and right across the stick, allowing players to shoot at 32 different angles. Fun, fast, and frenetic, Ice Hockey is early sports video gaming at its finest. 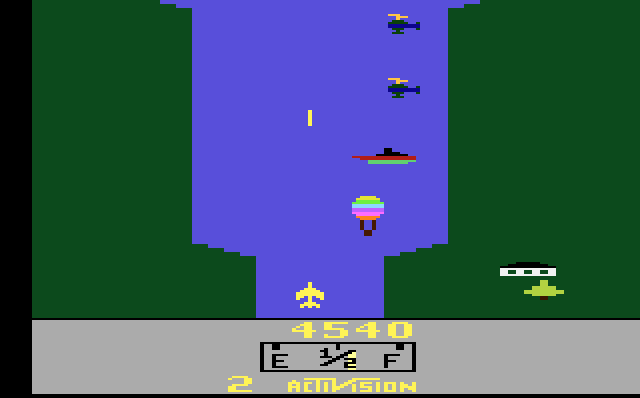 Featuring non-random repeating terrain and RNG for enemy movement, River Raid was a technical marvel in 1982. Players control a fighter jet behind enemy lines, avoiding contact with the environment and enemy ships and aircraft. Complicating the fast-paced arcade gameplay is the need to constantly refuel the jet by flying over fuel depots along the river. Ambitious pilots can opt to destroy the depots for points, but risk running out of energy before reaching the next cache. 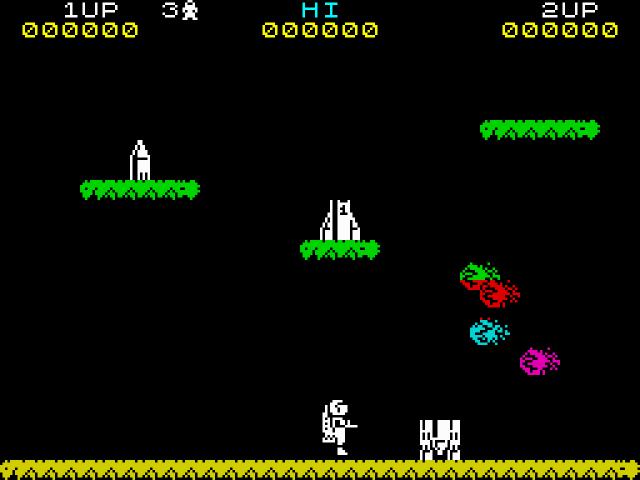 The first title from Ultimate Play the Game, which would rebrand itself as Rare in 1988, Jetpac is a science-fiction shooter game in which Jetman must rebuild his rocket to explore alien worlds. Featuring excellent graphics, presentation, and sound, and addictive gameplay, Jetpac raised the profiles of Tim and Chris Stamper, who would oversee Ultimate/Rare's rise into the stratosphere on Nintendo consoles during the third, fourth, and fifth generations. 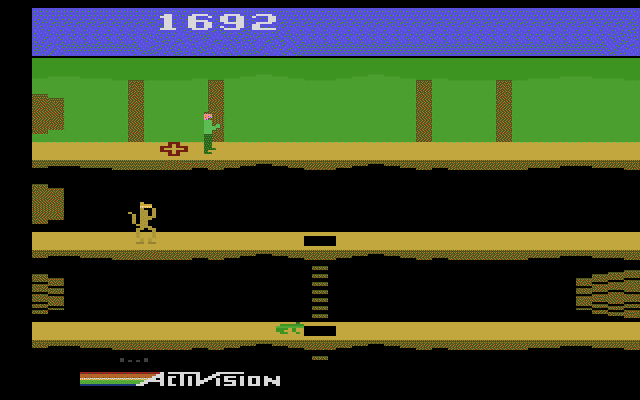 The original Pitfall! was an excellent arcade action game, but its sequel is even better, with deeper, more methodical gameplay. Pitfall Harry is back, this time in a gigantic world that expands out both horizontally and vertically. Using custom hardware built into the Pitfall II cartridge, designer David Crane was able to achieve elements previously considered impossible on Atari 2600 hardware: detailed animations, smooth scrolling, and a multi-channel musical score. 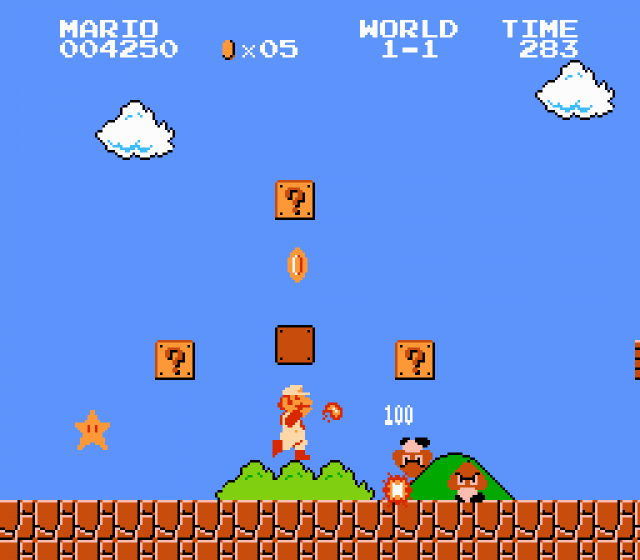 As analysts continued to cast doubt on the future viability of the North American video game market after the 1983 crash, an Italian plumber named Mario showed up on American shores, resuscitated the market, modernized the industry, and shifted the balance of power to Japan. Boasting precise controls, bright graphics, bouncy music, diverse levels, and groundbreaking design, Super Mario Bros. turned an entire generation into video game fans and changed the way people thought about gaming. 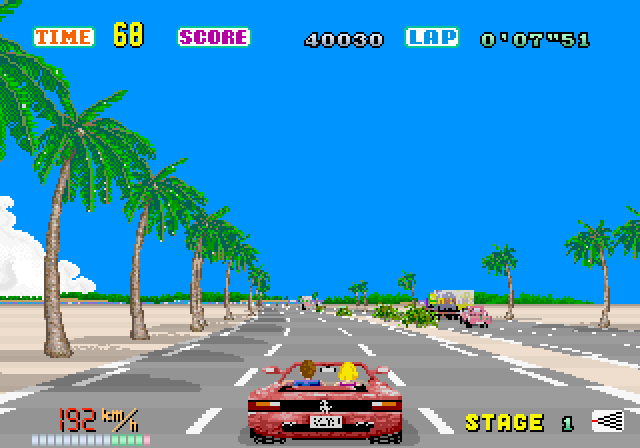 Designed by Yu Suzuki, who would go on to create After Burner, Virtua Fighter, and Shenmue, Out Run is a gorgeous driving game with an unusual amount of open-ended gameplay. In Out Run, players drive a Ferrari Testarossa Spider through a series of scrolling 3D environments. By reaching checkpoints before time expires, they can extend their trips. What's most impressive about Out Run is its non-linear gameplay. Throughout each race are several forks in the road, which allow players to choose their own adventure.

Enjoyable read Evan, looking forward to the rest of the series.

First game i played, was super mario bros on nes, what great memories;)

Combat is such an awesome game. I can't play games before NES but for a few.

I agree that FFIX shouldn't win.

I actually gave it a chance all the way to disc two. And it failed to impress.

I wish I could say Legend of Dragoon is the pick for 2000! It IS an RPG though, if that helps at all :-P

Nice article! Must be tough picking one game for every year. Cool thing is most of these games are still to play. I like Combat for example, even if it's 40 years old (!) next year, playing that today with a friend is still a blast. :-)

Arguing over who gets to use the one big plane rather than the 3 little ones! recall the "combat" me and my brother had over this game before we even picked up the joysticks haha.

Combat was great. Video games started with SMB tbh though. Most atari games only had a single level.