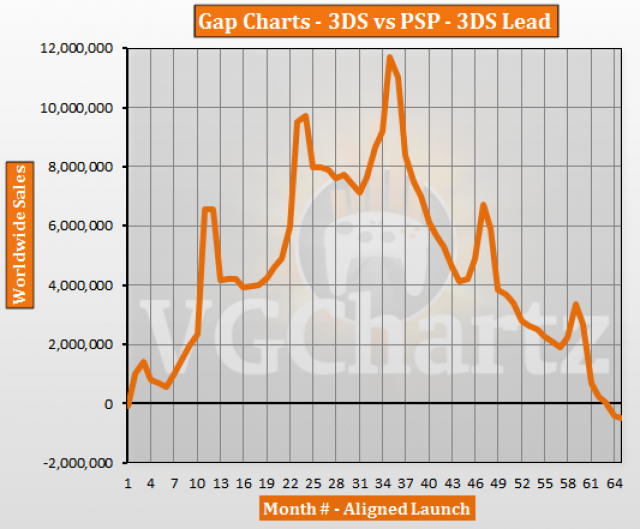 The PSP in the last two months is now ahead of the Nintendo 3DS when you align the launches of the two handhelds. In the latest month the gap grew by 74,117 units in favor of the PSP and by 3.12 million units in the last 12 months. The PSP currently leads by 491,255 units.

An important note is that the two handhelds launched at different times of the year. The PSP first launched in December 2004, while the 3DS launched in February 2011. The 3DS has sold 58.52 million units in its first 63 months, while the PSP sold 59.01 million units.

At the end of the day the PSP was a beast, the DS simply overshadowed its success.

Sucks the PSP's successor could only reach about 1/8 of it.

Wow, the PSP sold better than I thought it did, or the 3DS is selling worse than I've been thinking it has been.

With the NX coming up as hybrid system it seems unlikely that the 3DS will outsell the PSP. Such a shame the Vita wasn't a better succesor because there is nothing wrong with the hardware.

Whatever happened to that upgraded 3DS XL? Did it ever get another title other than one?

Wow, the PSP sold better than I thought it did, or the 3DS is selling worse than I've been thinking it has been.

any system, regardless of home console or handheld, that makes it to 80 million sold has done extremely well. So the former

honestly the PSP sold fairly well, despite being in the shadow of the DS, and for the 3DS to match the PSP with today's big mobile market is actually pretty impressive

Says a lot that Nintendo still has a pretty strong following for their handhelds. I think its RPG's on the go that is holding a lot of people.... Pokemon, Zelda, Golden Sun, Monster Hunter kind of stuff

PSP is the true king of the handhelds!!!

Sarcasm at its finest!!!

The PSP is going to win this!

When Sun/Moon come, the 3DS will get the lead again, but with the NX coming so soon and practically being confirmed a handheld, that lead is not going to last long. It has been a tough battle, but alas, the market was way healthier back in the DS-PSP days.