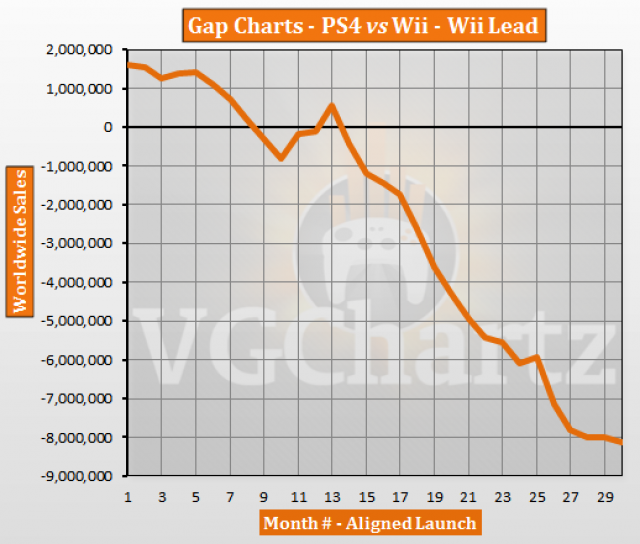 For the PS4 to win this, it'll need to maintain its 2015 levels (on average) throughout 2018. Unless the PSVR or NEO really take off, I don't see them doing that.

The market might yet be ripe for disruption, and Sony could conceivably still shoot themselves in the foot with the new version of the PS4, so the next couple years will be very interesting.

Dont forget the kinect stole some of the audience as well. But yeah ps4 will start pulling ahead next year.

It will be interesting next update, once the UC4 push is registered. What were the biggest titles of the Wii's third year?

Wii Sports Resort, New Super Mario Bros Wii, Monster Hunter Tri. Also it was around the time a lot of workout games were coming out (including Just Dance and Wii Fit Plus)

PS4 more than likely won't start catching the Wii until sometime next year.

Yes, but I suppose UC4 will make some sort of dent on the graph, at least for the month of may. It may be small considering we'll see the Wii Sports Resort push soon, though.

It is definitely possible. The Wii sold 783,713 units for the next month.

Man, almost a million in one month, and that's not even during holydays. No wonder Nintendo tried to replicate the success of the Wii.

The Wii was a beast during its first three years on the market. However, sales dropped off sharply once casuals started moving to smartphones / Facebook.